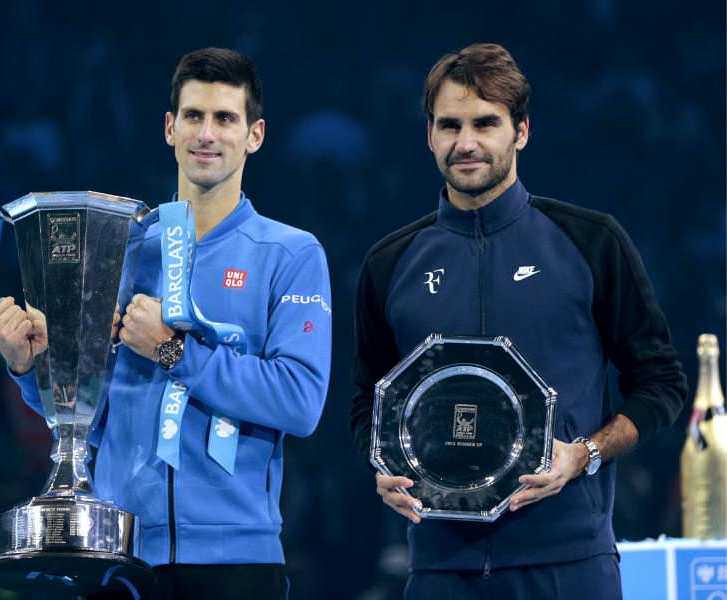 Novak Djokovic, ridiculously ahead of the field in the rankings, picked up 1,300 points he probably did not need in winning 6-3, 6-4 in an hour and 20 minutes against Roger Federer and is unchallenged​ on any surface against any opponent as the best player in the world.

Both finalists were history men but Novak Djokovic underlined that he has more ofit in front of him than does Roger Federer when he beat the Swiss in two sets to become the first player to win the ATP World Tour Finals title four years-in-a-row.

He was worth it, holding his nerve under intense pressure as the Swiss strove against tiredness to make a fight of it. The world No. 1, ridiculously ahead of the field in the rankings, picked up 1,300 points he probably did not need in winning 6-3, 6-4 in an hour and 20 minutes and is unchallenged on any surface against any opponent as the best player in the world.

It was his fifth win over Federer in eight matches this year and drew him equal at 22 apiece in their career rivalry. Together they have won 11 of the last 13 season-ending titles, Federer taking six in all in a record 10 finals, Djokovic’s tally now standing at five in all.

It was not as routine as the score suggests but Djokovic finished the stronger. At 28, he is seven majors and six years behind the 17-Slam, 34-year-old Federer although the Swiss holds up extraordinarily well in even the toughest examination of his stamina and strength.

So, a year after they should have contested the final, they were back to finish the job. Federer withdrew on the morning of the 2014 decider with a back injury before heading to Lille to help win the Davis Cup for Switzerland and Andy Murray accepted a late invitation to play an exhibition against Djokovic.