Will Chelsa Keep Their No 1 Position?

A lot of factors are going to play a key role in this year's title run and most are not in Chelsea's favor as they bid to keep their hold on the EPL trophy.

Getting to the top is easy but staying there and maintaining the No.1 position is a bit more difficult task, and could easily apply to the current English Premier League champions Chelsea. You only have to look at the statistics to imagine how tough it is for a team to retain their title in the subsequent years. Ever since the Premier League was formed in 1992 only two clubs have managed to win back to back titles and they are Manchester United, who have done it on no less than four times and Chelsea, who won the title in 2005 and 2006 under Jose Mourinho in his first spell as manager.

Having finished third in the 2013-14 season, the Blues made a stunning comeback in the last season. they easily won the premier league with Manchester City struggling throughout the last season. Manchester United were still rebuilding after a poor 2013-14 season and Liverpool and Arsenal never really threatened for the title despite spending a lot of money in the transfer window. This year it is likely to be a different story with other teams more determined than ever to wrestle the title away from the Stamford Bridge Outfit.

A lot of factors are going to play a key role in this year’s title run and most are not in Chelsea’s favor as they bid to keep their hold on the EPL trophy. 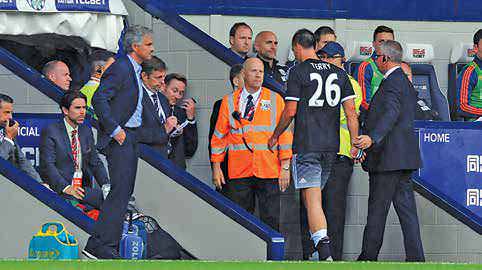 John terry was taken off in the game against Manchester City at half time.

Perhaps some of the hints as to how this season is going to pan out for them was evident from the club’s preseason matches as they failed to win any of their matches in the regular time. Even in the Community shield against Arsenal, the team looked poor for large parts and Jose lost his long unbeaten record against Arsene Wenger with a margin of 1-0.