Stephen Curry, Heart Of The Town 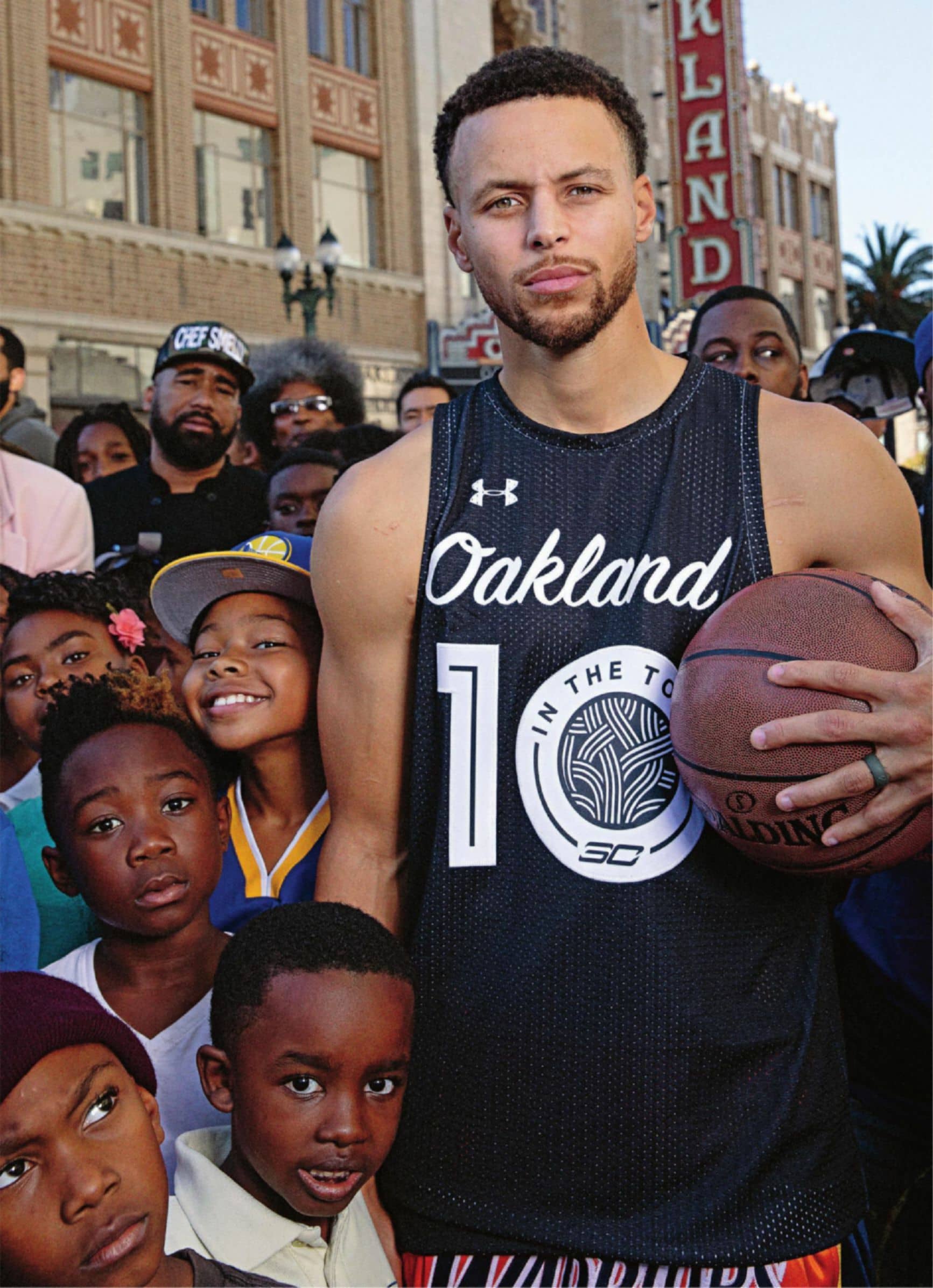 Stephen Curry has spent the past decade transforming Oakland's Golden State Warriors from an afterthought NBA franchise to a full-blown dynasty. Now, with the team approaching its 2019 move to San Francisco, the three-time champ is showing serious love to a city that has given him so much.

Stephen Curry stands on the court at Oracle Arena with a ring on his right finger and a microphone in his left hand.

“Y’all ready?” he asks the riled-up crowd. Then he starts the countdown.

All eyes gaze up as another banner rolls down from the ceiling. For several seconds, Stephen remains fixated on it. He takes a few deep breaths and smiles softly, reminding himself to appreciate what it means.

“That moment, man, it’s so short, but there’s so many thoughts that go through your head,” he says. “That drop just definitely encapsulates everything that you’ve gone through.”

And with that drop, the door was closed on an epic 2017-18 championship run.

And the Warriors’ final season in Oakland officially began.

It’s a quiet Thursday morning at Jack London Square in downtown Oakland. An old-school Warriors banner—yellow with hints of orange and blue—flutters outside Scott’s Seafood restaurant. A few people sit looking out at the estuary that bleeds into the San Francisco Bay, as they sip from coffee cups. Somewhere on the other side of the water is the newly constructed Chase Center, where the Warriors will be playing their home games come October of 2019.

A train rumbles by in front of Home of Chicken and Waffles—the small spot Stephen Curry used to routinely hit for late night food following a Dubs victory. It’s the type of place you can smell before you see it. The cinnamon-coated batter, the warm maple syrup, the deep-fried wings.

Drive straight up Broadway to 14th Street and you’ll hit Benny Adem, Curry’s barber’s local shop. It’s adjacent to the Oakland City Center and only a couple blocks from where the 2018 championship parade began. The floats cruised on Broadway all the way to 20th, then hung a right toward Lake Merritt, eventually winding up on Lakeside Drive. Curry’s first apartment was around here, a highrise building with a beautiful view of the surrounding landscape. 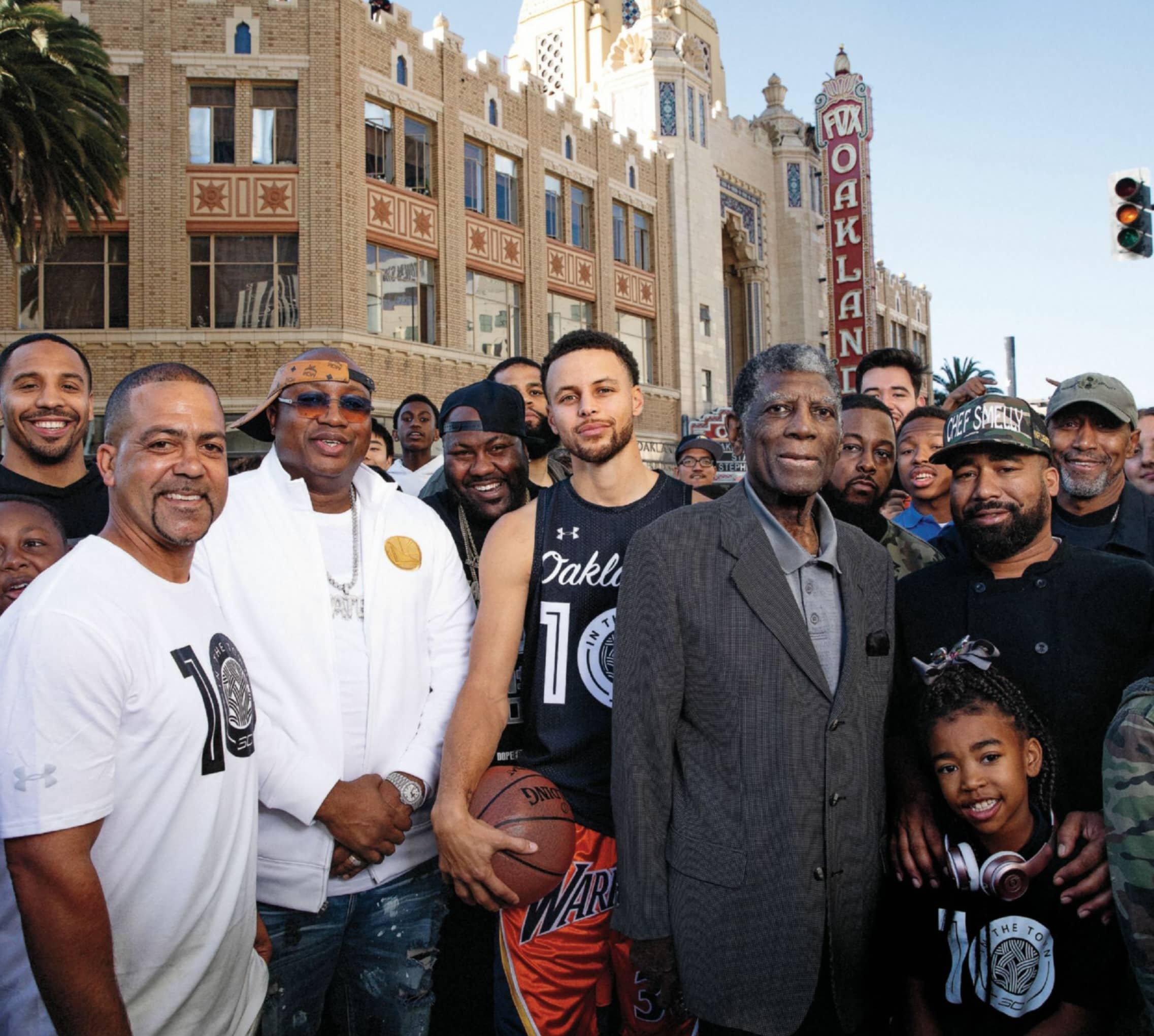 The parade ended back on 13th Street by the Oakland Museum of California. Close to a million people lined the U-shaped route, several arriving as early as 6 a.m. to get a good spot. A sea of blue and yellow painted the city as players hopped from their double-decker buses to celebrate with the local citizens.

It’s here in Oakland that the Warriors have been for the last 47 years. This is where the story of Stephen Curry has unfolded. Where a kid from North Carolina first arrived, anxious and bewildered, almost a decade ago. Where that kid started his family and is in the process of raising three kids. Where he became a two-time MVP and three-time champion.

“This is our new home,” Curry says. “I really don’t feel like we’re ever going to leave this area, and that’s something that 20 years ago...I never would’ve thought this would be where I’d end up.” 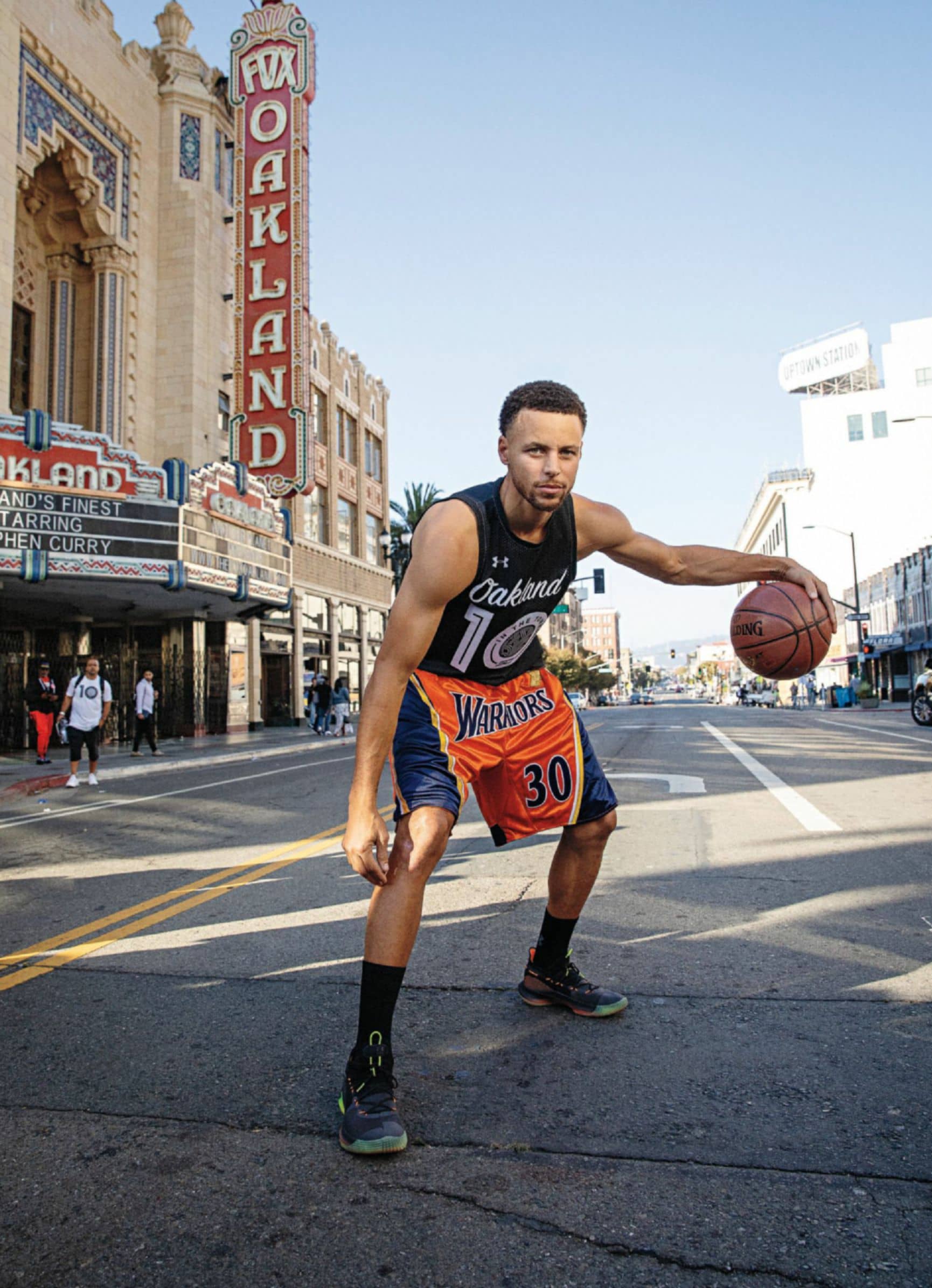 One hundred and fifty boys and girls, all from the Oakland area, wait eagerly outside the Fox Theater on Telegraph Avenue. They’ve been carefully positioned in rows for the massive photo you see on the cover of this magazine. The plan is for Stephen Curry to walk out of the theater and directly into the pre-arranged shot. Other prominent figures from the community that we’ve gathered—rapper E-40, former world champion boxer Andre Ward, Warriors legend Al Attles and many more—will fill in just behind him. Couple snaps of the camera, maybe some slight adjustments and we’re done. Quick and easy.

But the instant Curry emerges from our makeshift green room, this plan crumbles.

No, his presence is not a surprise. The kids have been preparing for it for over an hour. And yet, once it becomes reality, once the actual Stephen Curry is standing merely five feet away from them, the excitement cannot be bottled. It all comes rushing out uncontrollably.

Our nicely organized lines—smallest in the front, tallest in the back—disinte grate into a giant mosh pit. Kids dig into their pockets for their cell phones, others reach out toward Curry in desperation. There’s pushing and shoving as each kid tries to inch closer. The scene suddenly resembles a rock concert more than a photo shoot.

From thoroughly structured to utterly chaotic. In a matter of seconds.

We have somehow managed to underestimate the impact Curry has here. And now, as our cover star is increasingly swarmed by a crowd of animated children, we start to question whether any of this will actually happen.

It is Stephen himself who comes to the rescue, quieting the shrieks with simple waves of his arms.