‘We're confident in these young people' 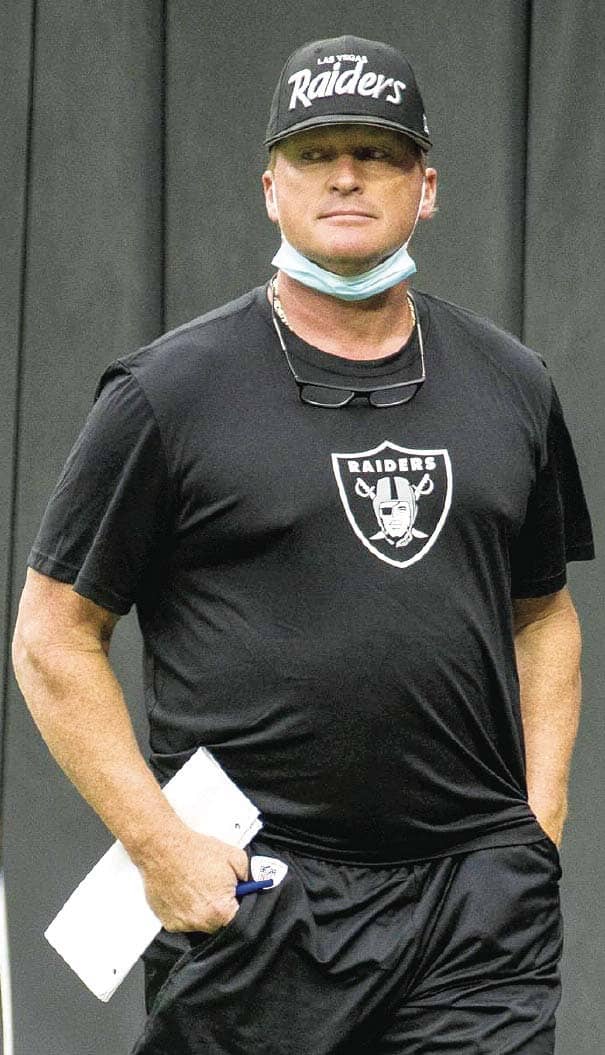 Raiders head coach Jon Gruden kept busy in the days before the team officially opened Allegiant Stadium on Monday Night Football, overseeing practices and trying to correct mistakes that Las Vegas had made in its season-opening win in Carolina. Additionally, Gruden met with reporters via Zoom calls throughout the week, offering updates on players and addressing various other topics. Here’s a little bit of what Gruden had to say.

Q: What went through your mind when you heard owner Mark Davis said, ‘Welcome to the Death Star, where our opponents’ dreams come to die?’

A: I think it’s a cool name for our stadium, I don’t give damn about Star Wars. That’s what we’re calling our stadium and I don’t care what anybody else thinks. It’s a cool stadium, it’s a great name and we just have to play good when we’re in there.

Q: What pleased you most about the Week 1 win over Carolina?

A: Just three penalties. I was really pleased with that for the first game we played. I mean we had very little full-speed action. We had three penalties, we had no turnovers. We had as good a balance as we’ve ever had. We had 30 runs, 30 passes and nine different receivers. And we scored points and won the game in the fourth quarter, so those are the things that I think are positive. And we had some first-year Raiders get there first look in Silver and Black. It was cool.

Q: How do you think your young secondary held up?

A: John Abram did a great job. He made a lot of tackles. He made some good physical tackles, made some one-on-one tackles which is impressive. Showed good range, took good pursuit angles. Played with great energy. We are really excited about that. We didn’t have him at all last year. Arnette did some decent things. Obviously, he gets beat on the double move. You can’t have that happen in that situation. Mullen had his ups and downs. We’re young. We did some good things but also made some critical mistakes that we have to fix.

Q: What kind of difference do you see that Henry Ruggs III made and how defenses have to approach you?

A: Well he can stretch the field horizontally on the jet sweeps. He’s a threat to carry it, and he’s also obviously very fast vertically. But he made his presence felt. We tried to get it to him early and often, and we’ll continue to do that.

Q: How does it change things when you can hear basically everything that all the coaches are yelling and saying?