‘We keep fighting and that is a great ingredient' 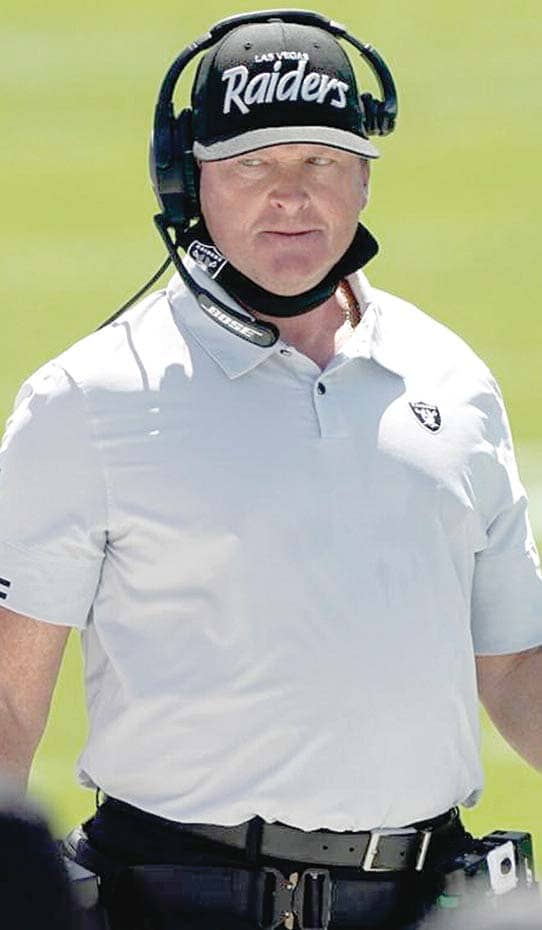 The Raiders reached their bye week feeling pretty good about their 3-2 record. A win over the defending Super Bowl champion Chiefs provided much of that optimism, but as head coach Jon Gruden was quick to point out, there is still plenty of room for improvement before Las Vegas can truly be considered a contender in the AFC. Then again, the win in Arrowhead might just be the key to getting the team on a more consistent path. Gruden talked about the victory over Kansas City and some of the Raiders plans for the bye week, along with other topics, during his daily meetings with reporters.

Q: What can you tell us about the NFL protocols for the bye week?

A: There’s a lot of protocols. Mike Mayock and our staff keep me abreast of all of those. They have to come in every day to be tested. That’s mandatory by the league and the players union. None of the coaches are allowed to leave town either. We have to be in town and be tested every day. We’ll open up our building for our players to come in and do that, obviously. We’re going to challenge our guys to be smart, wear the proper face shields wherever they go. Be very careful because we’d like to keep this group together and see what we can do the rest of the season.

Q: Is the win over the Chiefs validation of what is possible with this team?

Q: Is this part of the process of learning how to win when you are young?

A: I think so. I think it also speaks volumes of the kind of men that we are bringing in here, Mayock and his staff bringing in some guys that have a real edge to them. They really like to compete no matter what the score is. If you look at the way we finished in New England, we scored at the end. It was meaningless to a lot of people, but we did the same thing against Buffalo. We keep fighting and that is a great ingredient I think on winning teams. Obviously, we do have some skill. We have some more speed on offense which showed up today. Defensively, we are still a work in progress.

Q: Can you talk about what Jeff Heath brings to the team?