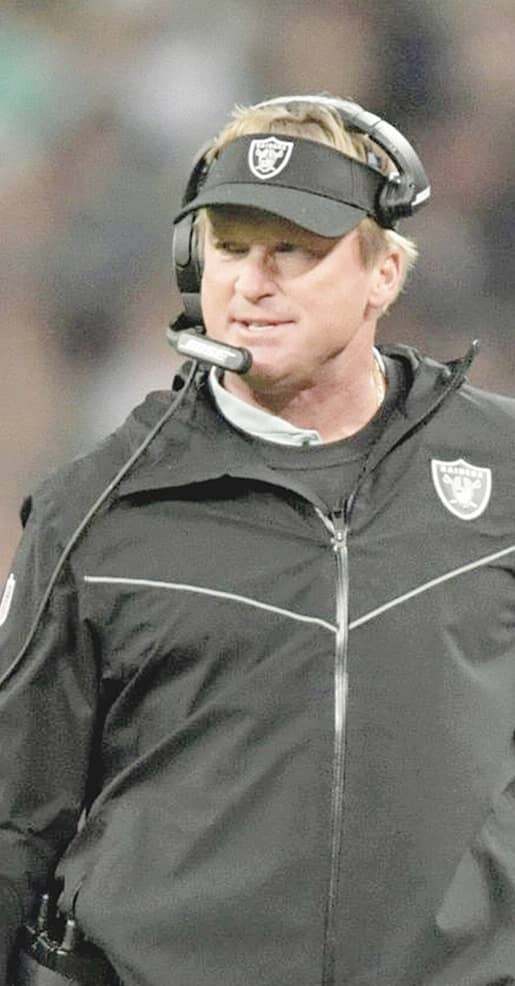 After losing two of their first three games and drawing a little heat from the national media, the Raiders put together back-to-back wins over the Indianapolis Colts and Chicago Bears, victories that had everyone at the team’s facilities feeling a lot better about their plight. Coach Jon Gruden was certainly feeling optimistic about things and shared some of his thoughts on what he told the players before they were given the week off for the bye, fullback Alec Ingold and why he chose to have the Raiders fly into London earlier this year than he did in 2018:

Q: What was your assessment of the team when you went into the bye week?

A: Well we’ve had a lot of players play critical roles that maybe we didn’t think would play this substantial of a role this soon. I’m really proud of the development of some young players. Really pleased with our coaching staff, the job that they’ve done. We did add a receiver in a trade last night. We traded Buffalo to get Zay Jones, a young man that we liked coming out of East Carolina who has some production in the league. But I’m proud of our team. We have a lot of respect for how far we have to go, but we’re making some progress.

Q: Maxx Crosby has started to see increased playing time. What have you seen from him so far?

A: As you saw in training camp, he has incredible effort in his play. He just seems to never tire. He’s a fun guy to have. We have a lot of respect for what he’s done and got a lot of goals for him to obtain before he’s done playing here.

Q: If he’s playing that much, you must like what you’ve seen from his run defense. Has he evolved in that part of the game?

A: A little bit. Clelin Ferrell didn’t play in that game, so someone had to pick up the slack. So we felt like he had enough in the tank to play 25 or 30 snaps in the second half and that’s what we did.

Q: The roughing the passer penalty on Maurice Hurst during the game against the Chicago Bears, what did you see?

Q: Do you see the confidence growing in the team?