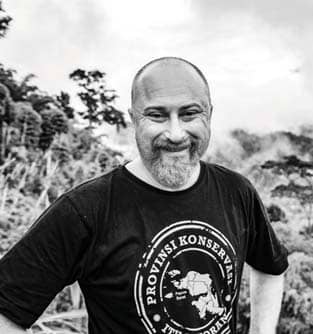 I am a storyteller,” John Weller, 46, says modestly of his award-winning work. “I try to use storytelling to illuminate important issues.” One area in particular has dominated Weller’s life for close to two decades: Antarctica’s Ross Sea, Earth’s last intact ocean habitat. Working with organizations in more than two dozen countries, his photographs of the Ross Sea and his international initiative The Last Ocean became the face of Antarctic conservation, reaching hundreds of millions of viewers worldwide and helping drive the adoption of the world’s largest marine protected area, covering 600,000 square miles. “I wish I could give you the experience of being in that room when this happened,” Weller told an audience in his hometown of Boulder, Colorado, earlier this year. “Nations were literally hugging other nations. In a world that is more and more divided, this is what we need. Though this was a massive win for Antarctica—a massive win for our oceans—it really was a peace treaty.”

Q: Why is this an important habitat to conserve?

A: Antarctica is hurtling toward a cliff, as are all its creatures. In mere decades, climate change has transformed the environment. More than 90 percent of ice shelves on the Antarctic Peninsula are in rapid retreat. A dozen have collapsed completely—and this is just the proverbial tip of the iceberg. Antarctica as a whole is melting at an accelerating rate, changing the physical nature of the continent and driving sea-level rise. If these trends continue, most coastal cities will be underwater in a few centuries.