A RASH OF PROBLEMS 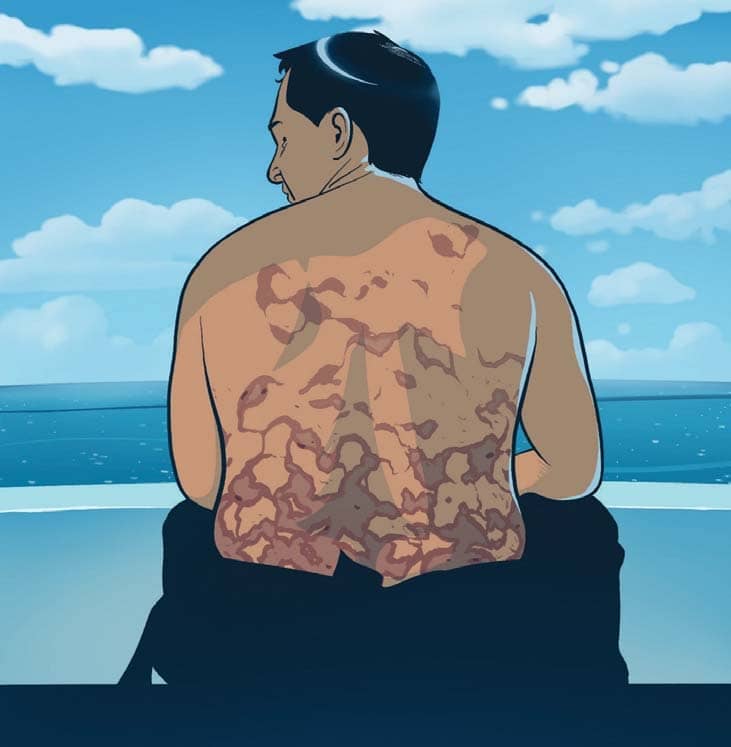 Failing to recognize DCS symptoms, a diver compounds his risk

When Justin pulled his one-piece wetsuit off his shoulders, his dive buddy immediately noticed he had a rash on his back and sides.

His first thought was that Justin had been bitten by something in the water, like sea lice. But there was no sign of any sort of bites or abrasions.

And it was something Justin’s dive buddy knew he had seen before.

Justin was a 45-year-old male with no known medical history. His doctor told Justin he was overweight but did not feel diving was a problem. The doctor did suggest Justin watch what he ate and get more exercise.

Justin and his buddy were on a three-day liveaboard trip, enjoying the freedom of eat, sleep, dive. They were determined to make every dive available to them.

The two were in their third day of diving. They had completed six dives using various gas mixes including air and enriched air of different concentrations. At least one dive included planned decompression stops. The water was cool, in the upper 60s, but they had generally good conditions and both divers were wearing 7 mm wetsuits.

On the third day, Justin woke up sore and tired but wrote it off to the cold water and the dives they had made so far. He didn’t feel bad, but he didn’t feel good either. His skin itched, but he assumed that was from the wetsuit and the saltwater. He didn’t mention how he was feeling to his buddy or the crew.

After their second dive, the pair planned to break for lunch. They would make one more dive that afternoon before they returned to the dock and their trip was done. Exiting the water, Justin pulled down his wetsuit to dry off and warm up. That’s when his buddy noticed the rash.

On further inspection, Justin’s rash had spread from his back to his sides and across his lower abdomen. His skin looked mottled and bruised under the surface. The itching was worse than it had been that morning, and his skin was tender.