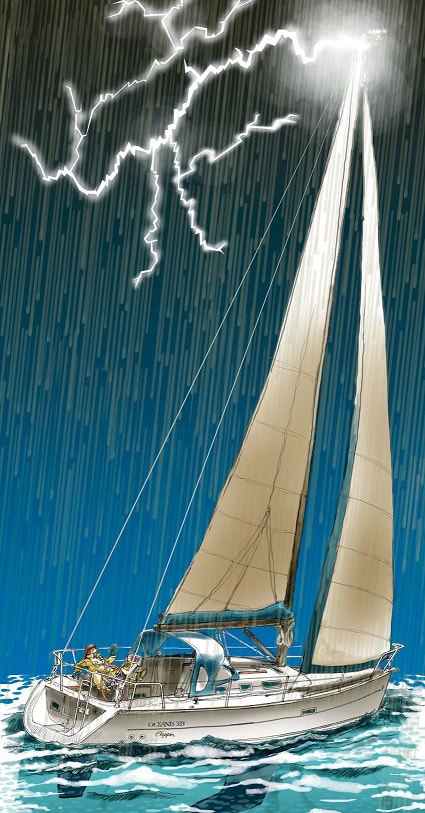 In the middle of the night, 400 miles away from the Marquesas, my eyes snapped open. Something had changed; Shape shifter, our Beneteau Ocean is 423 was heeling to a new breeze. I hopped out of my bunk and looked up the companionway. Colin, Shape shifter's owner, was flying around the cockpit like an angry tomcat in a tornado, ensuring the sails were reefed for the quickly building wind. It was pitch black; heavy clouds obscured any trace of the stars and moon.

I stood for a brief moment watching Colin finish reefing the main. Water flew off the dodger in thick sheets. The storm was building. Lightning no longer hid behind the clouds, but streaked across in defined jagged lines. Thunder joined with the chaotic sounds of the surf and sea. After throwing Colin his life jacket, I went down to check all of the hatches and sea cocks. A nervous chill started to creep up my spine. There was no way I was going back to sleep.

While I made my rounds, Colin set our autopilot to sail by the wind to protect the sails from any sudden gybes with wind shifts in the storm. We had recently named the autopilot "Iron Armed Einstein," out of respect for his brilliant steerage. I looked at the plotter screen at the Navy station. Two smaller storm cells on either side had merged together so that we were now in the dead center of a larger storm eight miles in diameter.

My eyes darted to the port light as it flashed with a nearby strike, illuminating the sea as clear as day. The color had changed from its usual royal blue to a sickly lime green coated with a matte veneer of pattering rain. I grabbed our logbook and jotted down our coordinates  and course, since it was the top of the hour, 2300. I looked at the floor and noticed it was damp from the rear head hatch that I must have missed in my rounds. I grabbed a towel to clean up the mess when suddenly a positive and negative charge across the sea and sky found our mast and discharged in a furious arc.