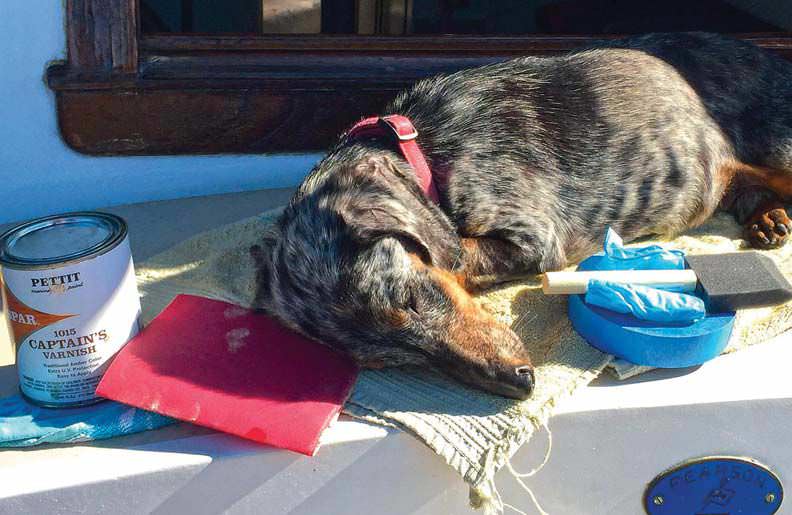 Cruising with canines is never boring.

Like most soon-to-be cruisers and fellow dog owners, I fantasized about life on the boat with woman’s best friend. I pictured cruising the waterways with my faithful companion, his ears flapping in the wind as he stood on the bowsprit looking down at the dolphins in the bow wave, or running ahead of me along tropical beaches at sunset. Then reality hit. My husband, Brian, and I became full-time cruisers in October 2014, and when a dog like Phinneus is in your life, the fantasy starts to become more like a bad dream.

Phinneus is a 15-year-old dapple dachshund, a pampered momma’s boy. He has long-term medical issues that require him to eat a venison-based diet. And then there is his relationship with my husband, Brian, who is not a dog person.

There are days on Scout, our Pearson Invicta yawl, when all I do is referee between Brian and Phinneus. Phinneus always wants to be where Brian is (or will be shortly) usually getting in Brian’s way. If Brian is getting ready to set or weigh the anchor, Phinneus is on the chain or bow roller or windlass. If Brian is trying to go up or down the companionway, yep, Phin is right there to trip him. And I can’t even begin to count the number of times a cup of coffee or sundowner has been spilled by a certain dachshund trying to maneuver around a certain husband. By contrast, our other dog Pickles, a Chihuahua mix, is an angel.

Up until September 30, 2014, Phinneus was a true-blue land dweller, and then it was time to move everyone on board. Scout was now sporting safety netting along the lifelines, artificial turf on the foredeck, a foldable crate under our V-berth and five bags of Phinneus’s prescription venison diet.