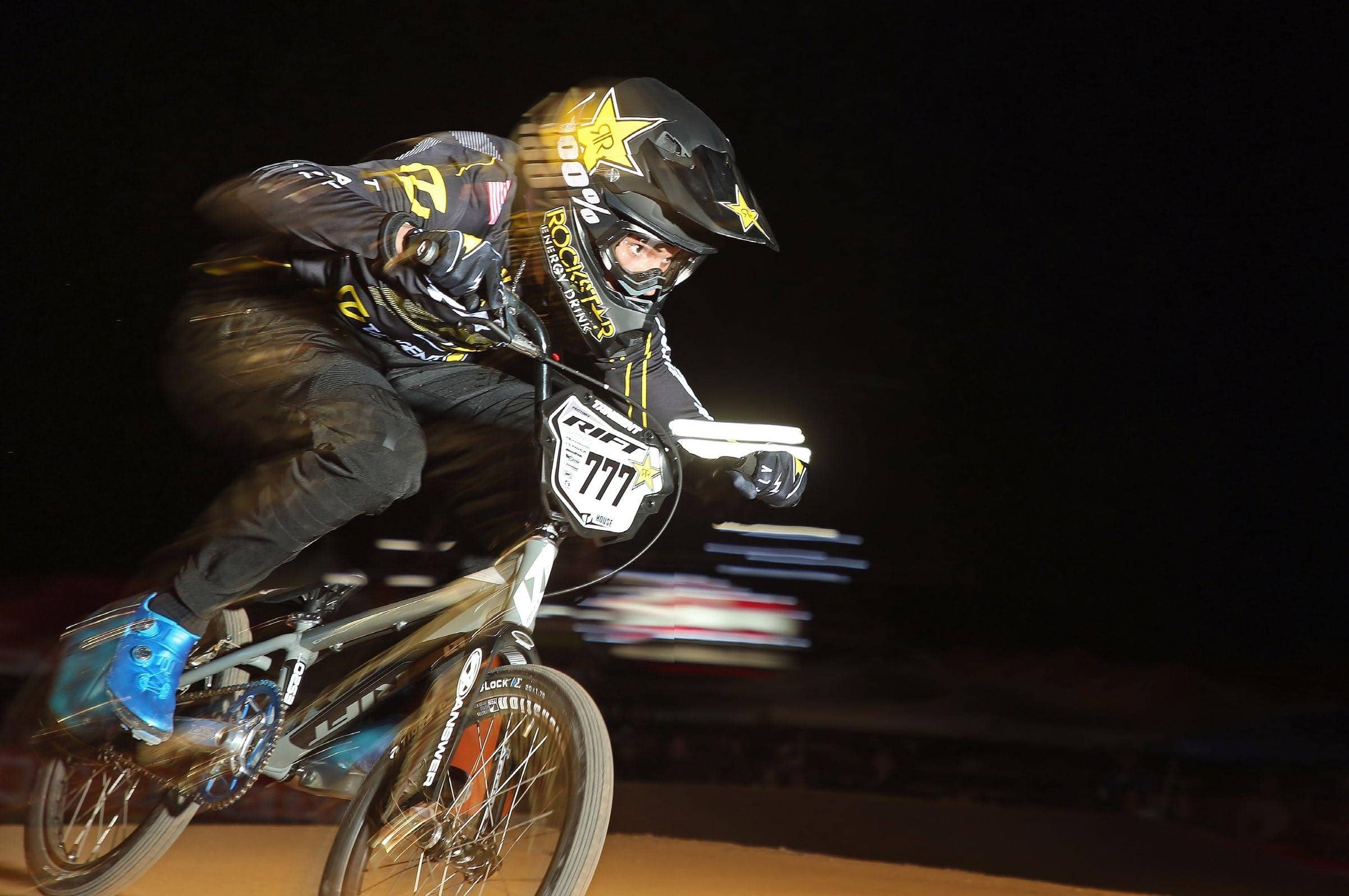 “In 2018, Bill Morris had asked me, ‘Yo, what song do you want me to play before your main?’ I said how about some Metallica? Let’s go! So he played Enter Sandman, and I won it from there. So last year, when I was down there, Bill asked me if I wanted to pick the song again for the main. I told him, ‘If you play Tool, right now, I guarantee you I’ll win.’ So while I’m rolling into the gate, Tool came on, and I looked over at my parents and just nodded my head. Right then, they knew - that I knew, that I was going to pull it off.”

RILEY: Music is a big part of our lives, outside of BMX. My father and I go to a lot of concerts. Right after the Houston national, we’d gone and seen Tool, on that Sunday night. When Tool comes on the radio, me and my dad fangirl-out hard. I’ve seen them live four times now.

Maliek (Byndloss -2013 No.1 Amateur) told us the same thing. They played Eminem, Lose Yourself, when he got in the gate. He said as soon as he heard it, he knew he had it won. It’s crazy how music can flick that switch.

RILEY: That’s it. It flicked the switch hardcore, baby. Big time. I’ve never felt that feeling inside of me, like when I was behind that gate. I had lane eight, the No.1 title was on the line, all the odds were against me. Affoo next to me in lane seven. Cam was in there. But I knew in my mind that I could do it.

YOU’VE JUST GOT TO WIN

RILEY: I was down by the finish line, warming up, and I asked one of the ABA workers, ‘Yo, can you see what I have to do to get the title right now?’ I already knew that I had gate eight in the main. So basically, they say, ‘You’ve got to beat Cam Wood, you’ve got to beat Kye Affoo, and Nick Adams.’ I would’ve had to beat Jesse Welch too, but he went out early. Basically, I just had to win. We were all up there in points.

Then when I heard the (title-chase) video, with that Monster-Energy voice, talking about Cam and I going at it all year long, hyping it all up, I was like ‘Let’s go boys! I’m ready!’

We were just re-watching the video, and if Brayden Kempel hadn’t unclipped in the first turn, that hole might not have been there for you to dive low to hit the pro set.

RILEY: I definitely have to pay my respect to Brayden, for sure. I wheelied out of the gate, and thought, there it is. I blew it. I knew that if I didn’t have a perfect lap right now, there would be no way I could win it. Kye had a perfect gate. Race Lee, over in lane one, all by himself, had the perfect start - just rode the white line to the turn. I single-manualed and pumped into the corner and I stayed to the outside - I didn’t move over at all, which is NOT what you’re supposed to do. I looked over and didn’t see anyone, so I railed the corner and cut down, and found my next gear.

Had you pre-planned that you’d take the Pro section in the main?

RILEY: No. Me and my dad had talked about it earlier, and he asked me - ‘What are you going to do?’ I said I didn’t know. Everybody knew the pro set was slower, but I’d taken it all weekend. I hadn’t taken the amateur side once. I figured if I was out front I’d take the pro section, because I didn’t think anybody could pass me. But if I was in the pack, I’d take the Am-side, like everyone else. I knew it’d be a last-minute decision.

Looking back, I wouldn’t have won if I’d taken the amateur side. I don’t know how it happened, but I had a perfect run at it and gained some speed over it. It was the craziest thing, because as I’m jumping over it, I was looking to the side, watching them. Over that last double, I could see both Kye and Race heading straight to where I’m about to go. Like a perfect triangle. I was like, ‘Oh dang, it’s about to go down!’

Then you had Race Lee giving you some love in the last turn...

RILEY: After watching the video, I’d pulled away from them by a bike or two in the rhythm. Compare it to Tyler Brown and Suarez in their main, put the video side-by-side, and it was the same move in the same exact spot. And I think Race Lee hit me a lot harder than Suarez had hit Tyler. If I would’ve gone over, then I think Race would’ve gotten disqualified. I saw him coming out of the corner of my eye, so I put the drift on. I don’t know how I stayed on my bike. I drifted it, re-corrected it, came off the backside of the turn, was trying to pedal but wasn’t getting anywhere. Figured at this point, I might as well just pump it, since I can’t pedal.

I’m not saying anything bad against Race. I love the guy. And if I was in his position, I would’ve done the same exact move ... but I would’ve hit myself even harder.

Not only amazing that you were able to stay upright, but to also keep enough speed to hold off Kye Affoo, who was charging hard to the finish.

Then I remember Chris Luna came up to me and said ‘You got it.’ I was like, ‘Did I get-it get it? Or are you just saying that?’ I was like, ‘Are you sure? You positive?’ And that’s when I saw Kye heading back to the finish to check on the video. He’s looking at me, I’m looking at him - and gOrk was wanting to take the winner’s picture, and I’m thinking - ‘I’m not sure if I should take this picture right now, because if I take this picture and he got the win, I’m going to be sooooo ticked.’