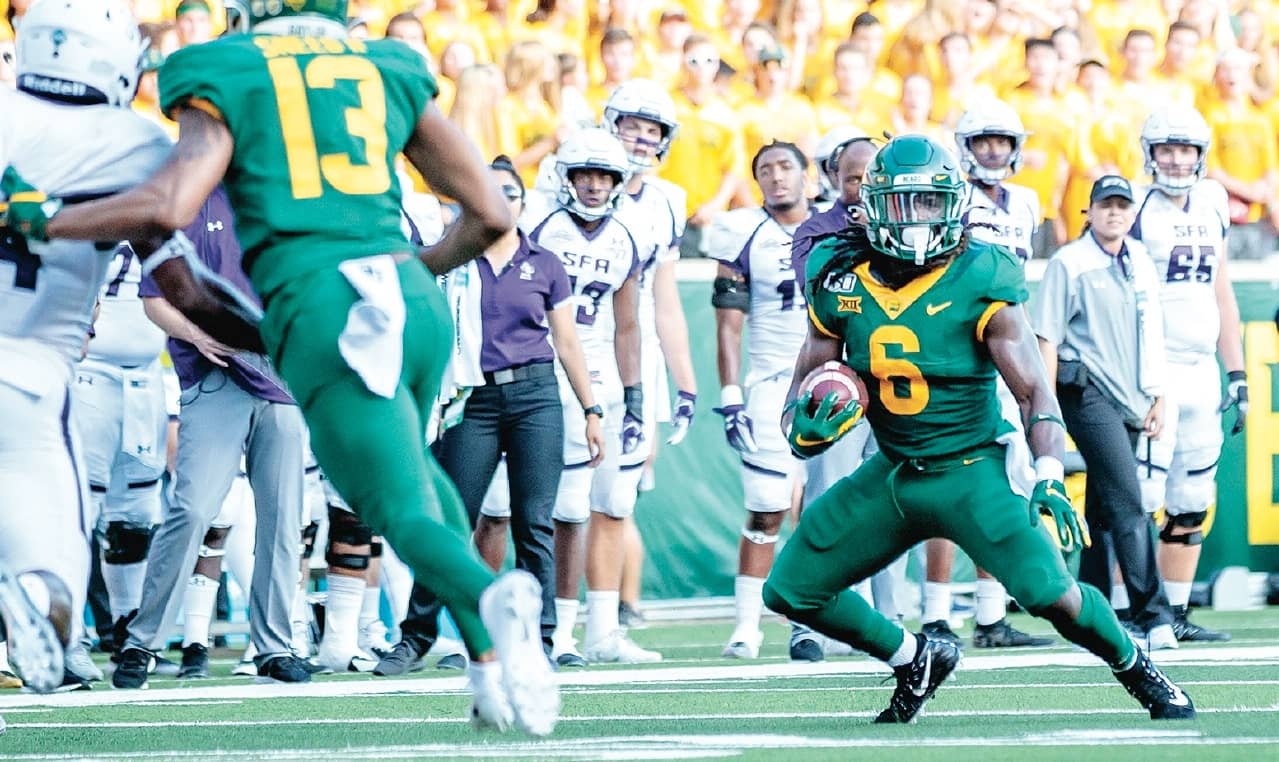 The 49ers have had notable success since the arrival of the John Lynch/Kyle Shanahan regime both identifying and developing young prospects who went unselected in the NFL draft. Following a trend that began in 2017, the 49ers have had 17 undrafted rookie free agents make their active 53-man roster over the past three seasons, including four last year on a team that featured one of the NFL’s most talented rosters and best rookie draft classes. With that roster teeming with talent coming off a Super Bowl appearance, it keeps getting more difficult for an unheralded rookie to make the team. But don’t count out any of the 10 undrafted rookie free agents signed by the 49ers in late April from making an impact as they fill the final berths on the 90-man roster San Francisco will take into training camp this summer.

College credentials: Dual-threat back started 16 games in 45-game career at Baylor, producing 1,998 yards and 15 touchdowns rushing on 386 carries to go with 79 receptions for 485 yards in the Bears’ high-powered offensive attack. Averaged 5.8 yards per carry rushing (fifth in Big 12 Conference) with seven touchdowns in senior season and finished career with consecutive seasons of 25, 26 and 25 receptions. Totaled 2,483 yards and 16 touchdowns from scrimmage and 2,849 all-purpose yards during college career.

In the summer mix: With the 49ers trading Matt Breida to the Miami Dolphins on the final day of this year’s draft, there is an opening in San Francisco’s backfield for an athletic, change-of-pace scatback with explosive ability. Hasty displayed those characteristics during an impressive showing at the NFL Combine, where he recorded the best shuttle time (4.03 seconds) of any back and his SPARQ score placed him in the 90th percentile of NFL running backs. Hasty’s deal with San Francisco included $90,000 in guaranteed money and a $15,000 signing bonus, an investment that suggests the 49ers expect the powerful 5-foot-8, 205-pound Hasty to challenge for a roster spot and at least end up on their practice squad.

College credentials: Earned honorable mention All-Big Ten honors last year after starting 11 games during his redshirt senior season at Nebraska as a graduate transfer from Oklahoma State. Finished his lone season with the Huskers with 34 tackles — four behind the line of scrimmage — with 1.5 sacks and one interception. In four years at Oklahoma State, Daniels recorded 64 tackles — 9.5 for losses — with two sacks and three passes defensed. Was granted a medical redshirt season after starting four games with Oklahoma State in 2018.

In the summer mix: Some observers suggest that Daniels has the best shot of any undrafted rookie to make the San Francisco roster this year, and the 49ers did nothing to discourage that perception when they gave Daniels the largest amount of guaranteed money handed out by the team to any individual in this year’s crop of URFAs. Daniels’ $105,000 in guaranteed money and $25,000 signing bonus indicate the 49ers like his potential and character and feel they can groom the 6-foot-3, 311-pounder for the future. Daniels has impressive size, but he’s a raw prospect who needs to get better with fundamentals and leverage to make it as a pro after recording a slow (5.18 seconds) time in the 40yard dash.

College credentials: The 5-foot-11, 197-pound speedster declared for the draft after a junior season at the University of Washington that saw Ahmed start 13 games and rush for 1,020 yards and 11 touchdowns on 188 carries. Ahmed was named to the All-Pac 12 honorable mention team after his freshman and junior seasons during a three-year career with the Huskies that saw him gain 2,016 yards and 21 touchdowns rushing while also circling out of the backfield for 50 receptions for 331 yards receiving.