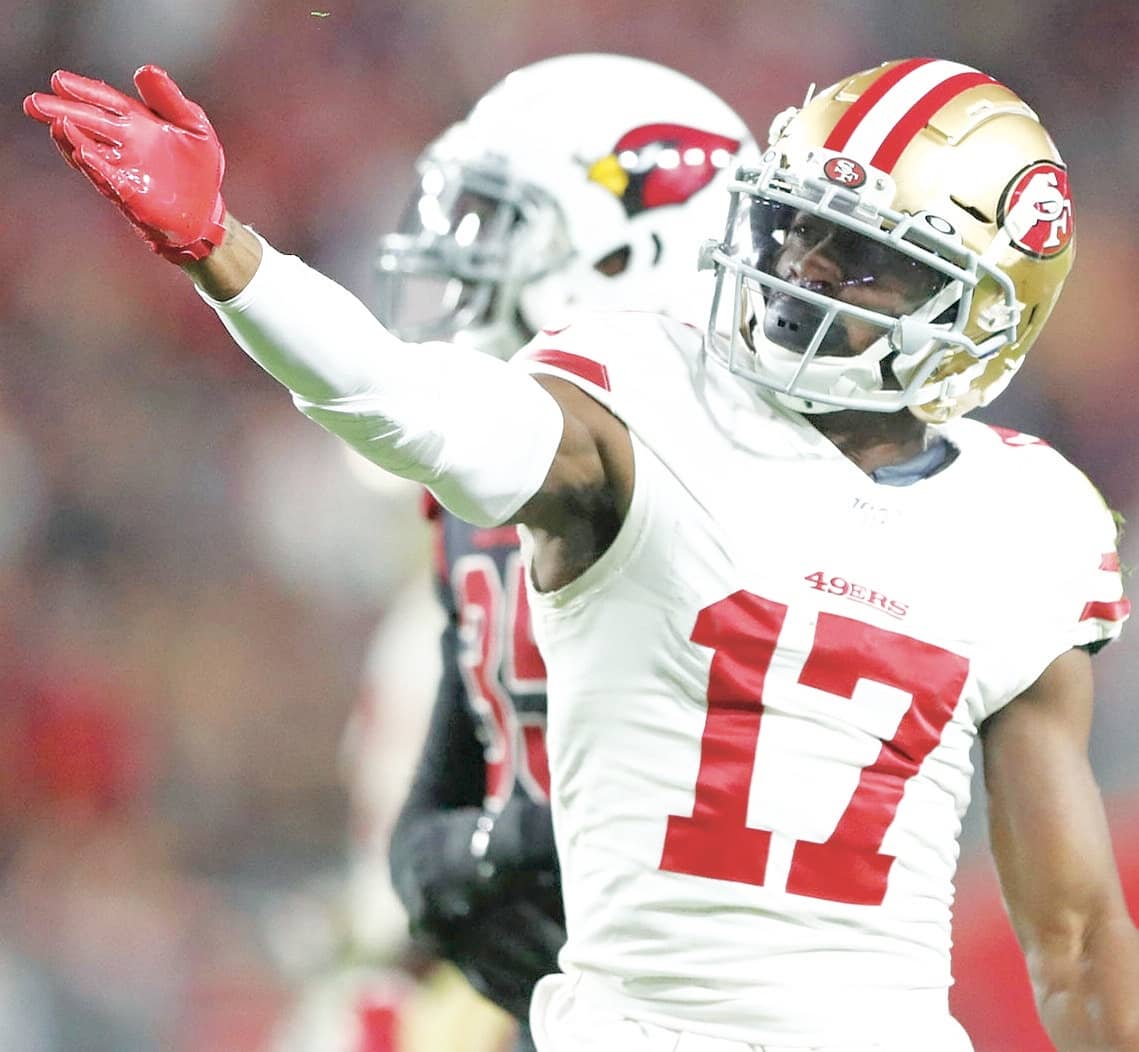 After their dismal 4-12 finish last season, tying San Francisco with two other teams for the NFL’s second-worst record, nobody really could have believed that the 49ers were so close to actually being somebody again in the NFL consciousness. Nobody, that is, except the 49ers themselves. Particularly general manager John Lynch and coach Kyle Shanahan, the leadership team that remained confident the 49ers were only a few more beneficial personnel decisions away from a turnaround that would make them contenders again. And they were right. Boy, were they right. But they still needed to hit on a few more roster- and personnel-tweaking decisions to make it happen, and for the third consecutive year, that’s just what the Lynch/Shanahan tandem attempted to do with a series of moves that carried up to the NFL trade deadline in October. Here, The Niner Report revisits the significant moves of the offseason — including one team-jolting midseason transaction — and examines how they have worked out for the 49ers to help push the team into the NFL playoffs for the first time in six years.

Timely trading at the top

With the NFL’s trade deadline looming on the horizon, the 49ers — the surprise team of the NFL season to that point — entered the fourth week of October as the last remaining undefeated team in the NFC with a clear path ahead toward grabbing an early stronghold on the conference’s No. 1 playoff seed by midseason.

But after an ugly 9-0 victory in the rain and slop at Washington, it was becoming more and more obvious that San Francisco’s receiver corps was not keeping up with the standard of quality play being provided by almost every other unit on the team. The 49ers got only four receptions from their wideouts in that game — three of them coming from backup Kendrick Bourne.

With second-round draft pick Deebo Samuel still settling in as a rookie and learning the offense, the 49ers found themselves unable to count on veteran holdovers Marquise Goodwin and Dante Pettis to consistently make plays — or even make routine catches — as San Francisco’s front-line receivers.

So the 49ers did something about it.

Unsatisfied with the status quo and unconvinced this group of receivers had a go-to target that could keep defenses honest and provide a consistent playmaker out wide for quarterback Jimmy Garoppolo, the 49ers decided to go all-in for the 2019 season and acquire a legitimate veteran threat they might only be renting for half a season.

The 49ers pulled the trigger and sent their 2020 third- and fourth-round draft picks to the Denver Broncos in exchange for Emmanuel Sanders, a two-time Pro Bowler and one-time Super Bowl champion who had performed in more big situations and produced much bigger statistical results than the rest of the five receivers on the San Francisco roster combined.

Sanders was dropped into the starting lineup just four days after his first practice with the team and produced immediate results — both for himself individually and the offense as a whole.

Garoppolo’s first pass of the game was thrown to Sanders for a reception, as was the final play of San Francisco’s 75-yard touchdown drive, a four-yard touchdown pass from Garoppolo to Sanders that began a 51-13 beatdown of the Carolina Panthers — the most points scored in a game by the 49ers during the past 26 seasons.

Sanders’ impact was immediate, and it has been just as dramatic ever since, giving San Francisco the weapon at receiver that the 49ers needed to open the floodgates for the rest of their offense, which had relied heavily on one of the NFL’s top rushing attacks before his arrival.

But not anymore. Sanders has brought not only firepower but also balance to the offense, and Garoppolo has flourished since his arrival. Always a consistent threat, Sanders already has a few star turns since joining the team — a seven-catch, 112-yard performance at Arizona and a seven-catch, 157-yard outing at New Orleans, which included a 75-yard touchdown catch.

And his impact on the offense and team is as obvious as these next few numbers might suggest: In their first seven games with Sanders, the 49ers averaged 46 more passing yards and eight more points scored per game than they did in the six games this year they played without him. They also averaged almost a full yard more per passing play.

The verdict: Thumbs way up.

Spending for an edge

The lack of a consistent pass rush was one of the primary factors that doomed the San Francisco defense — and, in the same sense, the team in general — to mediocrity last season, providing a ripple effect throughout the unit when the 49ers couldn’t put enough heat on opposing quarterbacks when it counted.

San Francisco’s first priority in 2019 free agency was to find an edge rusher who could make a difference and help change those results.

Hello, Dee Ford. The sixth-year veteran had blossomed into a

Pro Bowl star in 2018 with the Kansas City Chiefs, finishing eighth in the NFL with a career-high 13 sacks and leading the league with seven forced fumbles — matching the entire total of seven takeaways for the San Francisco defense last season.

The 49ers had to pay an exorbitant amount to plug this shiny new commodity into their revamped defensive line: A 2020 second-round draft pick sent to the Chiefs to acquire Ford, then a blockbuster five-year, $87.5 million contract extension to sign Ford once they had him in the fold.

That was a price the 49ers felt they had to pay to secure a talent that could not only make an impact getting after opposing quarterbacks but in doing so also have a positive effect on other defenders down the line on San Francisco’s front wall, not to mention a secondary that would benefit from being exposed for lesser periods of time on passing downs.

Ford missed most of the team’s summer drills and the preseason with lingering knee tendinitis, but he was ready when the regular season began, and his impact was just as the 49ers had envisioned it.