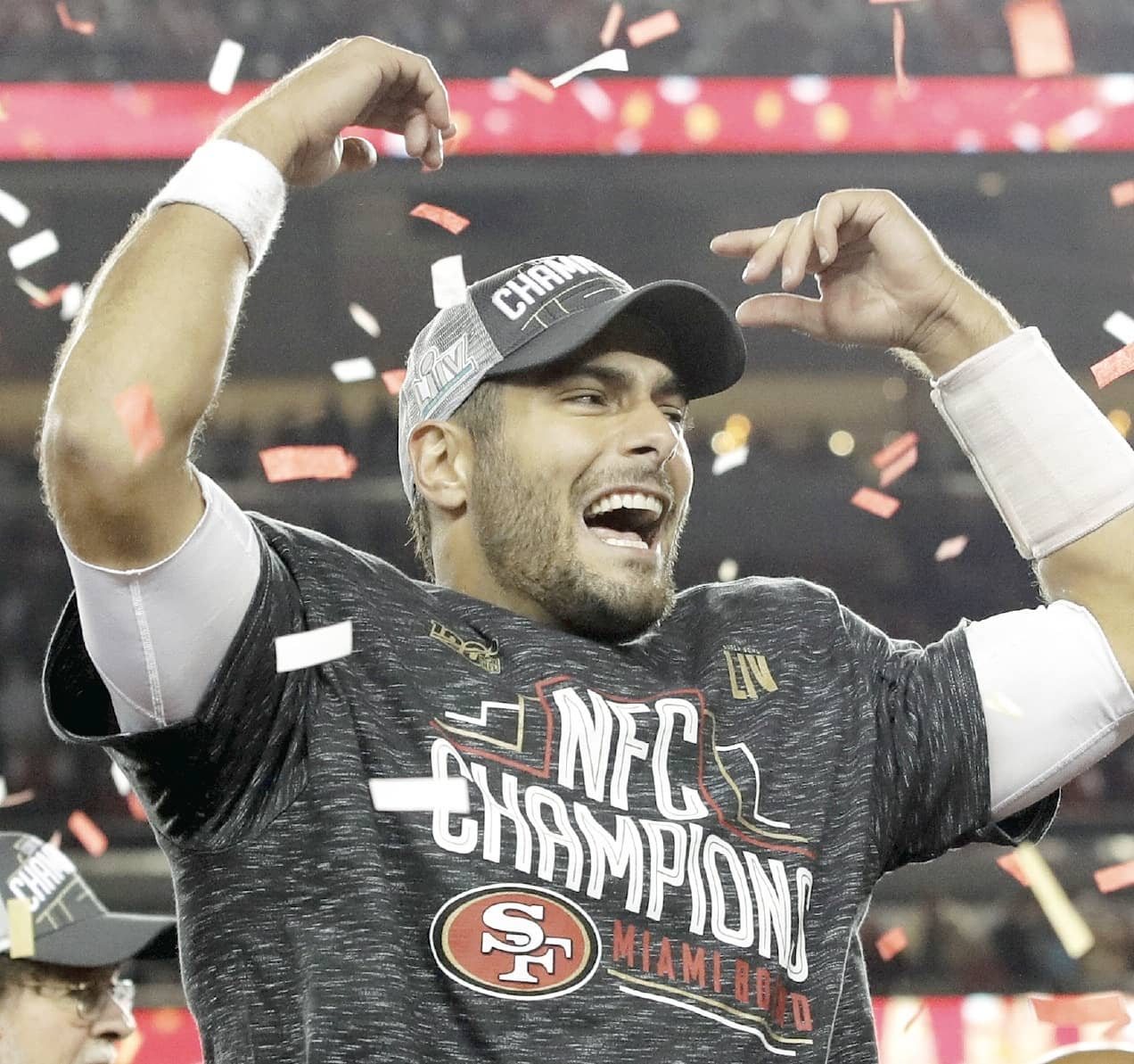 49ers confident they and QB can find greatness together

With exactly 100 seconds remaining in the NFL’s 100th season, Jimmy Garoppolo dropped back in the pocket for the most important pass of his football lifetime. With the reeling 49ers desperately needing someone to lift them from an epic Super Bowl collapse, Garoppolo looked down the field and saw speedy wide receiver Emmanuel Sanders flashing before his eyes — just as his status as a big-time quarterback went flashing before the eyes of a football nation and millions and millions of viewers around the world.

Flashing at the same time before the eyes of the 49ers and their strong and immense legion of supporters was a horrifying scene that nobody had expected with San Francisco holding a seemingly-safe 10-point lead with under seven minutes to play, a scene that continued to deteriorate to the point the 49ers found themselves trailing inside the two-minute warning and facing a third-and-long situation near midfield.

But Jimmy G could save the moment, save the 49ers, save his reputation from those who were sure to downgrade him if he couldn’t bounce out of his fourth-quarter doldrums and lead San Francisco to victory.

Sanders slipped behind the Kansas City defense and had several steps on two defenders as he raced toward the end zone. Garoppolo spotted Sanders and heaved a pass that would carry some very heavyweight depending on whether it came down in Sanders hands or instead hit the turf.

But Garoppolo was long and wide with the throw, way off from hooking up with Sanders on a play that might have won the Super Bowl. Garoppolo was sacked one play later on 4th-and10, the Chiefs tacked on a touchdown with a broken-tackle 38-yard run against a wilting San Francisco defense, and the 49ers shockingly lost to Kansas City 31-20 in Super Bowl LIV.

We’re saying that the 49ers lost the Super Bowl rather than the Chiefs winning it, because that’s what it felt like for the 49ers and their followers.

When the sickening feeling in everybody’s gut began to subside, it was time for the masses to start pointing fingers at how the 49ers and their stingy defense somehow lost despite owning a 20-10 lead with only 6:17 remaining on the clock.

And many of those fingers were pointed directly at Garoppolo.

As is his even-keeled style, Garoppolo accepted the blame, but didn’t beat himself up or get too worked up about it — or the hurtful things skeptics were saying about him in the days following San Francisco’s loss.

“It sucked,” Garoppolo said as the 49ers cleared out their lockers several days after returning to California. “I mean, I wouldn’t want to put anyone in my head that Monday morning (after the game) just going through all that stuff.