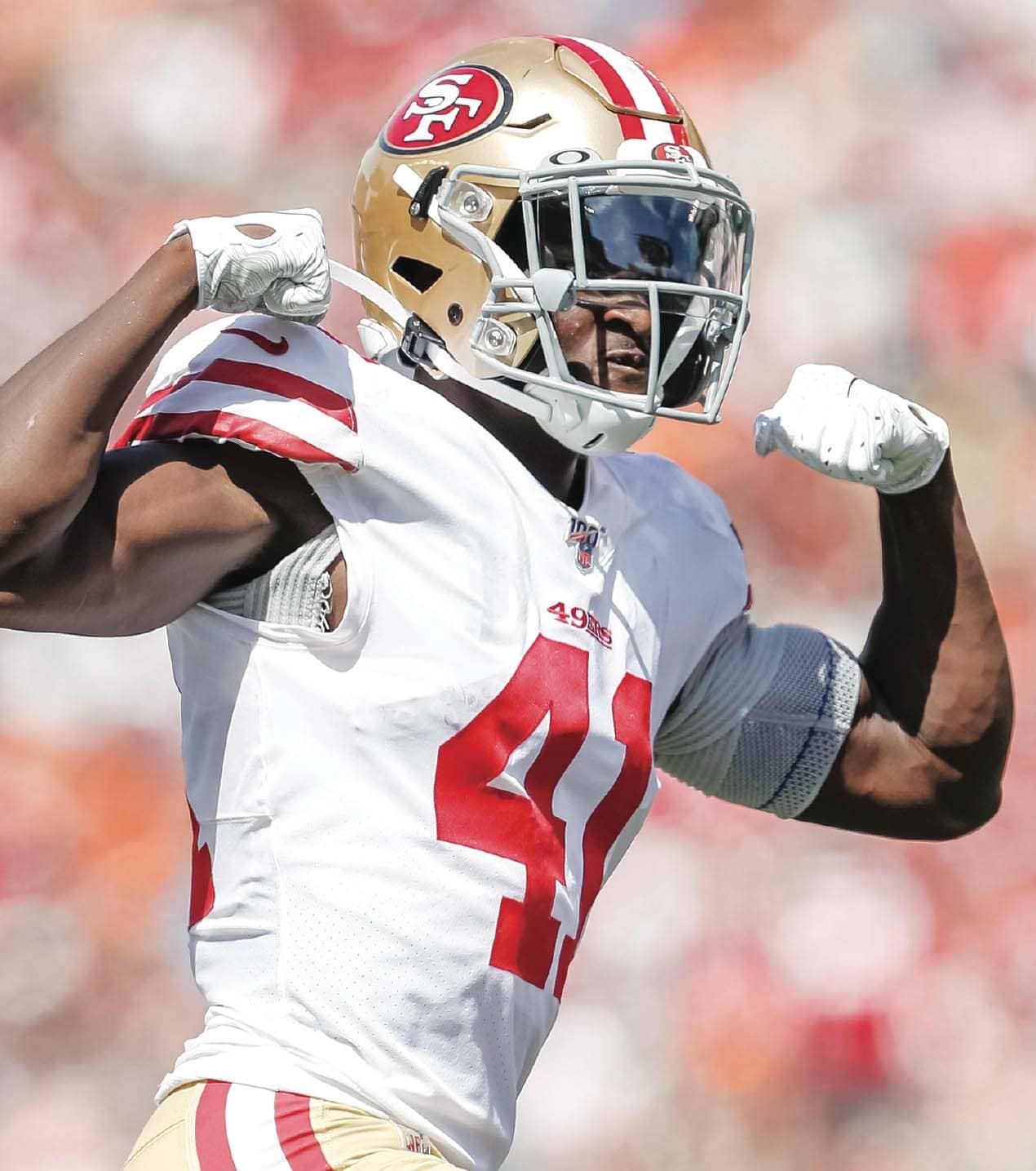 Sure, the 49ers have a young, talented, and hungry roster that returns 18 starters from the NFL’s surprise team of 2019, a unit that dominated the NFC last season and came within an untimely fourth-quarter meltdown of winning Super Bowl LIV. But that doesn’t mean there won’t be some intense summer competition awaiting the defending NFC champions in their quest to take that one final step to NFL champion. To improve on their near-masterpiece of 2019, looming ahead when training camp begins July 28 at the team’s Santa Clara complex is an open competition for jobs in specific areas and intriguing battles for a few other defined roles as the 49ers move forward into a new season. Here, The Niner Report takes a look at the key positional battles that will take place during the team’s summer camp and predicts who will emerge on top for San Francisco’s season opener Sept. 13 against the Arizona Cardinals.

On the hot seat: Witherspoon

The skinny: The 49ers saw a lot to like last year as this key starting role in their championship-level defense was manned practically evenly between fourth-year veteran Witherspoon and third-year veteran Moseley. But there also were things to be concerned about as neither player could nail down the job indisputably and both displayed inconsistency in key sequences. Witherspoon, the team’s 2017 third-round draft pick who has at different times looked both brilliant and blundering, had a strong start last season that seemed to suggest he had finally figured it out. Witherspoon returned an interception for a touchdown to seal San Francisco’s season-opening victory at Tampa Bay, then continued to build on that performance until being injured during the team’s Week 3 game against Pittsburgh. Proven veteran newcomer Verrett, who was expected to seriously contend for the job last summer but was limited by injuries, got the first shot at replacing Witherspoon but quickly imploded, immediately allowing two long receptions against the Steelers, the latter going for a go-ahead touchdown late in the game. That opened the door for Moseley, who finished the game against Pittsburgh and impressed in the role while start-ing San Francisco’s next eight games. Witherspoon returned in Week 13 after recovering from his foot injury and started the rest of the way into the playoffs, but displayed glimpses of the unsteady play that has characterized his career. When Witherspoon was burned for a 41yard touchdown catch in the first quarter of San Francisco’s playoff opener against Minnesota, the 49ers immediately went back to Moseley, who started the NFC Championship Game and Super Bowl, where he was responsible for a breakdown in coverage that ignited Kansas City’s rally from a 10-point fourth-quarter deficit. With the 49ers passing on a top corner prospect in the April NFL draft, Witherspoon and Moseley are clearly the favorites to start here entering 2020, but the 49ers would like to see one establish himself so that he can continue to grow in the job opposite All-Pro left corner Richard Sherman. Witherspoon is in the final season of his rookie deal and his future with the 49ers is clearly at stake. The 49ers own the rights of the undrafted Moseley for the immediate future after signing him as an exclusive rights free agent during the offseason. To hedge their bets, the 49ers re-signed both Verrett and journeyman Dontae Johnson for veteran corner depth, then made an intriguing late move in July by signing fast and versatile veteran Jamar Taylor, who has played for four teams over the last two seasons, including a combined 260 snaps on the outside and 205 snaps in the slot during that span. The 49ers will be the seventh team in eight NFL seasons for Taylor, who reportedly has run the 40-yard dash in 4.39 seconds. Others who could push themselves into the mix are Harris, the team’s sixth-round pick in 2019 who sat out his rookie season, and Williams, who made a name for himself throughout the NFL last season as one of the league’s premier nickel back/slot corners.