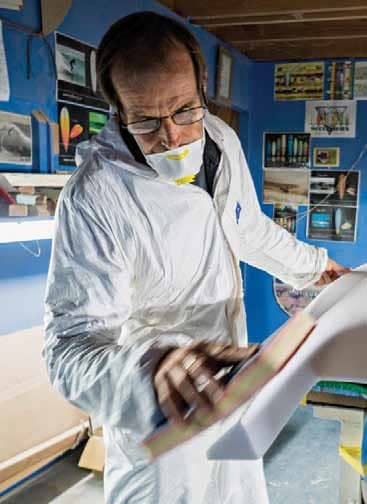 Ever heard of a Mini Simmons?

Well by now you should have, even though thirteen years ago there may have been just one man on the entire planet that had. The name seems straight forward enough: two words, ‘Mini’ usually means a small/compact version of something. The other word though… what’s a ‘Simmons’? The story of Bob Simmons is one of the greatest tales in surfing, even though up until fairly recently it was a tale that had never been told. Back in the 1940s/1950s and before the surfboard industry had really found its feet, there were a small number of enthusiastic surfboard builders up and down the California coast. The modern surfboard was starting to take shape, transitioning from crude flat planks into much sleeker, foiled forms. Give or take, all involved were following down a similar path design-wise. As is so often the case in surfboard design, there just had to be an exception; in this case the exception came in the form of a man by the name of Bob. By now the name Bob is well and truly associated with ground-breaking surfboard design with Australian Bob McTavish heading the bill.

For this story, however, we have another Bob. Bob Simmons came into surfing later in life, coming from a background in mathematics and aerospace. Bob Simmons injected a completely new line of thinking into the burgeoning surfboard design movement. Where others were going narrower, Simmons was going wider, where others were adding rocker, Simmons was going flatter, where others were adding plan shape curve, Simmons’ outlines were running more parallel, where others were using convex bottoms, Simmons was running with concaved, where others were using one central fin, Simmons was using two smaller fins, one on each rail - on and on the differences went. Simmons was essentially cutting his own track with his own ideas and theories, often clashing with his contemporaries in the process. By all accounts a bit of a loner, a maverick and outsider, he was also most definitely a trailblazer. What we are talking about here is a surfboard so unique in its shape it became known as a ‘Simmons’. Usually around ten feet in length, these boards featured a wide parallel plan shape with two fins placed well apart on a wide squareish tail.