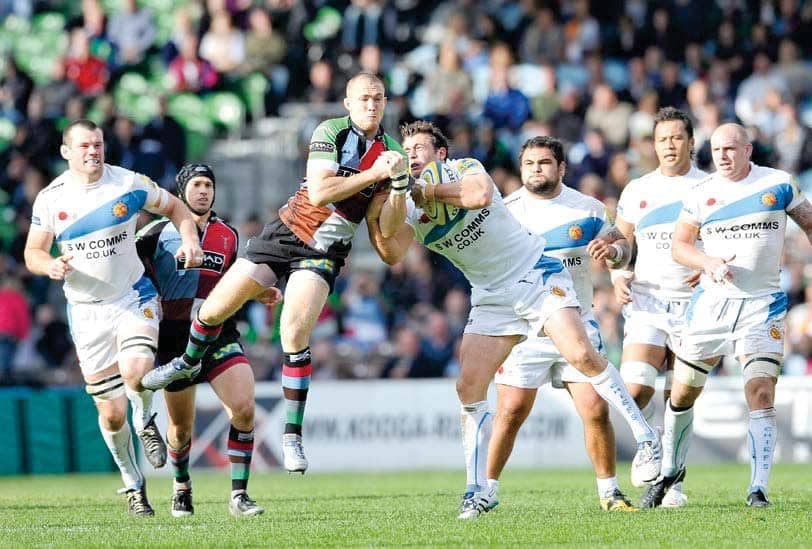 RICHARD BATH IS AN AWARD-WINNING WRITER BASED IN THE UK.

The Devonians may have played against the 1905 Originals in the match which produced the Kiwis’ ‘All Blacks’ moniker, but from their foundation in 1871 until lead sponsor Tony Rowe took over the then Fourth Division club in 1996, Exeter were a largely second tier club. But under the former Royal Marine and powerboat racing champion, this little West Country club built a shiny new ground, rebranded themselves as ‘The Chiefs’ and gradually rose from the third tier of the leagues. In 2010 under new director of rugby, local boy and former player Rob Baxter, Exeter Chiefs finally gained promotion to the top flight and for the second half of the past decade have vied for domestic domination alongside now disgraced Saracens. Rowe and Baxter have proved two things: that it is possible to break into the elite from the outside, and that it is possible to do so by developing almost exclusively local talent. Together the two West Countrymen have completely reshaped the landscape of England’s Premiership.

Money always talks, but in France it shouts from hilltops. Since the game went professional, the growing popularity of the country’s Top 14 has led to increasingly encroyable bidding wars for the rights to televise France’s top flight. That financial bunfight has always been won by the Canal+ channel, whose recent deal sees the Top 14 clubs earning E97m per season between 2019-2023, which is up from E31m in 2014 and E71m in 2018-2019. Added to the revenue from Top 14 average crowds of almost 15,000 per game, extravagant sponsorship deals, sugardaddy owners piling in their personal wealth, and the top clubs grabbing a good portion of the wealth generated by the Six Nations, this has turbocharged salaries in the league to a level which clubs in England and the Southern Hemisphere cannot hope to match. When he was Montpellier boss, Vern Cotter was reputed to be on E1m a year, a figure exceeded by top players like Aaron Cruden and Dan Carter.