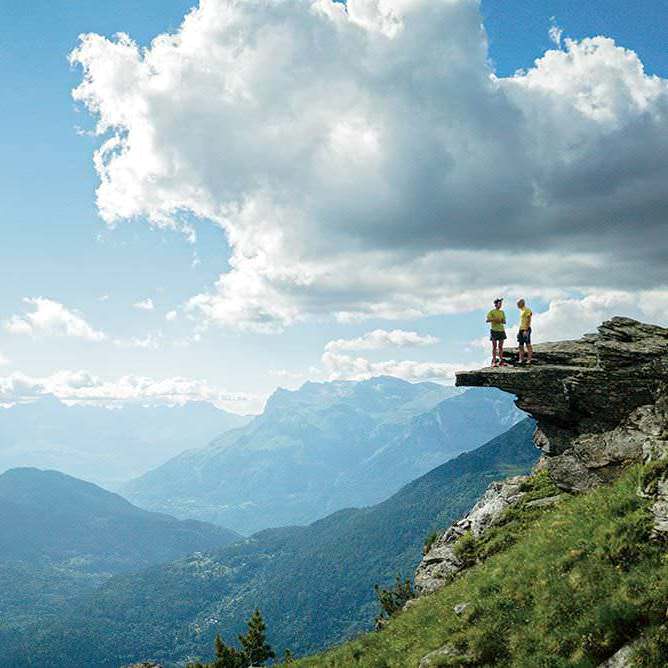 Mountain Climber Klian Jornet is on a mission to scale the world's highest peaks faster than any man alive. There's just one problem: so is Karl Egloff.

THE COMPETITION IS TRYING TO GET Kílian Jornet Burgada drunk. It’s the second week of July, and Jornet, 27, has traveled from his home in Chamonix, France, to Silverton, Colorado— a speck of an old mining town, population about 600—to take on the Hardrock 100, a 100-mile footrace through the surrounding San Juan Mountains. A few minutes ago, a runner wearing a hat that read LIVING THE FUCKING DREAM told him there would be tequila available at one of the aid stations during tomorrow’s event. Now a couple of runners are proposing a midafternoon spirit at the local saloon.

“Yes! It’s my friend’s birthday tomorrow and we need to celebrate.”

It’s a decent strategy to try to slow down Jornet, the Hardrock’s defending champ, but it’s not working. “I actually don’t like to drink,” he tells me. Besides, even a hangover might not stymie the man some consider the greatest endurance athlete of all time.

Jornet has, in just 10 years, won nearly 100 ultrarunning events, which are defined as races longer than 31 miles. Six of the past seven years, he has claimed the Skyrunner World Series title, the most prestigious award in mountain running. In the winter, instead of hanging up his sneakers and taking a sauna, he competes in ski mountaineering races, in which athletes climb several thousand feet up snowy peaks, ski down, and then do it again for hours. In that sport, Jornet has four overall World Cup titles. And he doesn’t just win races; he annihilates course records.

Last year, competing in his first Hardrock—which forces runners to climb 34,000 feet over jagged mountains and is generally considered one of ultrarunning’s toughest tests—Jornet won in 22 hours and 44 minutes, beating the old course record by an hour and 22 minutes. And for Jornet, the Hardrock is a training run. His true passion is setting speed records on famous trails and mountains. In 2009, he ran California’s 165-mile Tahoe Rim Trail in 38 hours and 32 minutes. During that effort, he slept for 90 minutes and still broke the record by seven hours. In 2010, he tackled Mount Kilimanjaro in seven hours and 14 minutes. The round-trip takes average joes about seven days.

The records are called fastest known times (FKTs). And while Jornet didn’t invent the genre, he has certainly popularized it. In 2012, he laid out plans for an audacious goal. In four years, he announced, he would set FKTs on what he calls seven of “the most important mountains on the planet,” including Alaska’s Denali (formerly Mount McKinley), Argentina’s Aconcagua, and the Matterhorn, Switzerland’s famous pyramidal peak. He calls the project Summits of My Life, and its final test is Mount Everest.He believes he can march up and back down the North Face of the world’s highest mountain, without supplemental oxygen, in just 40 hours.

In July 2013, Jornet took the first step by setting the FKT on Mont Blanc, a 15,780-foot peak in his backyard of Chamonix. Just a month later, he ticked off the Matterhorn with a remarkable time of two hours and 52 minutes, 20 minutes faster than the 1995 record. In December 2014, he bested the record on Aconcagua by about an hour. Once again, it appeared Jornet was unbeatable.

And then, all of a sudden, he wasn’t. In August 2014, FKT message boards began lighting up with some surprising news. A previously unknown Ecuadorean man named Karl Egloff had raced up and down Kilimanjaro in six hours and 42 minutes, destroying Jornet’s record by 32 minutes. Some considered it a fluke. Then, seven months later, he did it again, beating Jornet’s record on Aconcagua.

“People were shocked,” says Buzz Burrell, an ultrarunner who set an FKT on John Muir Trail in 2000. “Kílian is the best mountain runner— possibly ever. So it was surprising to see him beat.”

FANS WEREN’T JUST surprised. They were angry. Jornet, a humble, soft-spoken man with teenager-like stubble and a black tangle of sweat-tamed curls, had spent 10 years winning their adoration. Now his reign was being threatened. Goliath hadn’t fallen; Lou Gehrig had.

“People wrote me and said I was destroying Kílian’s world,” says Karl Egloff, 34, when I reach him over Skype. Egloff has short-cropped, thinning blond hair and an angular face. He seems perpetually, almost perversely happy, with a large smile and doe-like blue eyes. Behind him, the walls of the house in Cumbaya, Ecuador, that he shares with his fiancée, Adriana, are plastered with mountaineering photos. “They said I lied about my time on Kilimanjaro,” he says. “But you can’t react emotionally. Fans can be crazy.”