The Importance of Sania Mirza 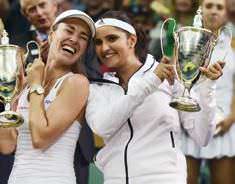 When will India's best-ever women's tennis player be given the break she deserves?

Somewhere, between riding on waves of political correctness and lashing out at morons who persist with religious ridiculousness, is the real Sania Mirza. We can see these two extremes quite clearly on her Twitter account, which is a medium for her to fight unnecessary battles rather than being a mere social occupation, considering the levels of dangerous inanity she has been dealing with. It could overwhelm the strongest among us.

While brickbats batter all celebrities who receive their fair share of bouquets, the extremes of vilification and jingoism that Mirza has had to deal with can perhaps be topped only by those other humans from whom we expect godly things: our country’s cricketers. Even her latest mark of success, the 2015 Wimbledon doubles title, has been accompanied by criticism and caustic comments about the inferiority of the doubles game, as if she alone is responsible for its invention and proliferation.

As with many of her achievements, the Wimbledon title is another first for a nation that had virtually no bars to raise in women’s tennis before Mirza came into the picture, all nose rings and slogan-embossed T-shirts and teen attitude. For the duration of her entire singles career, from 2003-2013, no other Indian woman player has come close to her range of milestones, and future prospects waver between being bleak and non-existent.