Inside the Vicious, Vicious Cheerleader Wars 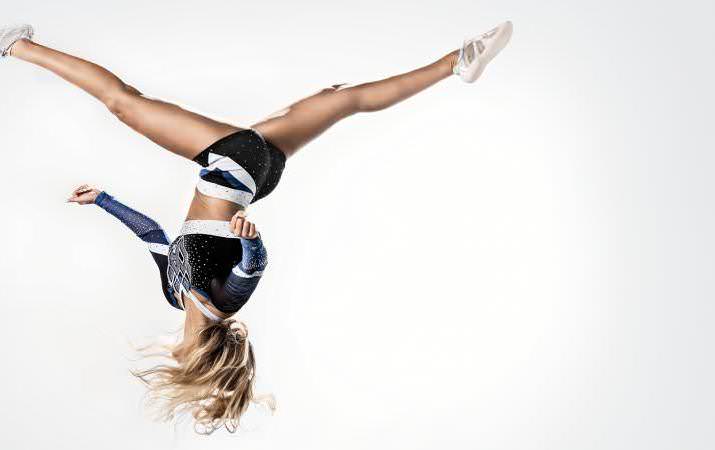 THE AUDIENCE at Cheerleading Worlds 2013 expected pyrotechnics from the Cheer Athletics Panthers. Lithe and powerful as their mascot, the team of 36 teenage girls took the stage at Walt Disney World Resort and proceeded to show gravity who was boss. As gasp-inducing as their handsprings and back tucks were their uniforms: micro-crystal-drenched mesh with a muscular feline appliqué draped chest to hip. The effect was radical, as though Bob Mackie had been appointed wardrobe master at your local high school.

Karen Noseff Aldridge, founder of uniform company Rebel Athletic, had risked her startup’s entire $10,000 marketing budget to establish her brand at the event, the cheerleading calendar’s big kahuna. “Overnight, everybody knew who we were,” says Noseff Aldridge. “Following the reveal of that uniform at Worlds, we took in over $600,000 in 72 hours.”

The roughly $300 million market for cheerleader apparel is dominated by traditional sideline squads that rally crowds at high school and college games. A smaller but bigger-spending segment is All-Star—teams, like the Panthers, that live to compete. All-Star cheerleaders buy their uniforms from the specialized gyms where they train. Gym owners buy uniforms from manufacturers and sometimes act as their sales reps. As in Olympic figure skating, aesthetics matter in All-Star, where uniforms are sexier and flashier than their school counterparts.

That bias toward bling has helped make Rebel one of the  most exciting companies to hit cheerleading in years. In 2012, Noseff Aldridge jump-started couture in a rut-stuck industry, employing trained fashion designers to satisfy customers’ wildest flights of fancy. She operates her own factory in China, where, she says, employees are paid above market wages to perform intricate, highly customized work in small batches, enabling her to compete on price while staying ahead in quality and design.

Rebel, based in Dallas, turned a profit after 12 months. In 2015, its revenue approached $20 million. The Dallas Cowboys and Atlanta Falcons cheerleaders use its practice wear and uniforms. “Karen has given us a whole new way to look at uniform construction and design. She’s a trendsetter,” says Brad Habermel, an owner of the Plano, Texas–based mega-gym Cheer Athletics, home of the Panthers. “She’s brought real excitement to this industry.”

But even as Rebel generates buzz and profits, a mighty opponent wants to swat it down. Varsity Brands is a $1.2 billion company owned by the $3.5 billion private-equity firm Charlesbank Capital Partners. Thanks to an aggressive campaign of acquisitions, rebate plans that make it expensive for gym owners to switch suppliers, and other strategies, Varsity Spirit, the corporation’s cheer division, commands north of 80 percent of the uniform market, as estimated by competitors. The company also wields outsize influence in virtually every aspect of the industry, including the camps and—most important—the competitions, which also serve as merchandise showrooms for apparel vendors.

Having established a name in All-Star, Rebel is now making a run at Varsity’s traditional sideline business, where schools present a very different customer universe. Here, too, Varsity dominates thanks to longstanding relationships with school coaches. “They grew up in the Varsity system,” says Noseff Aldridge. “All they know is to buy Varsity.” It’s another chance for Rebel to play the “challenger brand”: an upstart using unexpected tactics to tackle an entrenched player. Mark Barden, a partner in the consulting firm Eatbigfish, which coined the term, says Rebel is among the purest examples of a challenger brand he has seen. Noseff Aldridge “is incensed by the way Varsity works and wants to fix it,” he says. “You need that sense of righteous indignation to fuel a small group of people up against formidable odds to go back and back and back again to try and win.”

A CHALLENGER BRAND can’t do something just better: It must also do something that’s different—dramatically so. “Our focus is to do everything 180 degrees different from Varsity,” says Noseff Aldridge, who is intense and smart, her rapid speech interrupted by occasional sizzles of irritation. She has codified that intent in Rebel’s “Customer Charter.” Six of the charter’s 10 promises are explicit reversals of Varsity practices. For example: “We will respond to every phone call and email within 24 business hours” and “We provide the same level of service to every size of program.” Noseff Aldridge was herself— of course—a cheerleader. Born in Taiwan to a Chinese mother and American father serving in the U.S. Army, she lived with her maternal grandparents until age 5. Then her parents brought her to Fort Hood, Texas. “In a small town in Texas,” she says, “you were a cheerleader or you were nothing.”

She wanted to be a professional dancer. Instead, Noseff Aldridge acceded to her family’s wishes and attended Southern Methodist University law school. She left shy of graduation, and in 2007, she launched a company with her former law school study partner. Fortune Denim was their super premium jeans brand for women, with empowering messages sewn into the waistbands. Within nine months, they had racked up $1 million in sales. Jennifer Aniston and Eva Longoria wore the brand. Elle came calling.