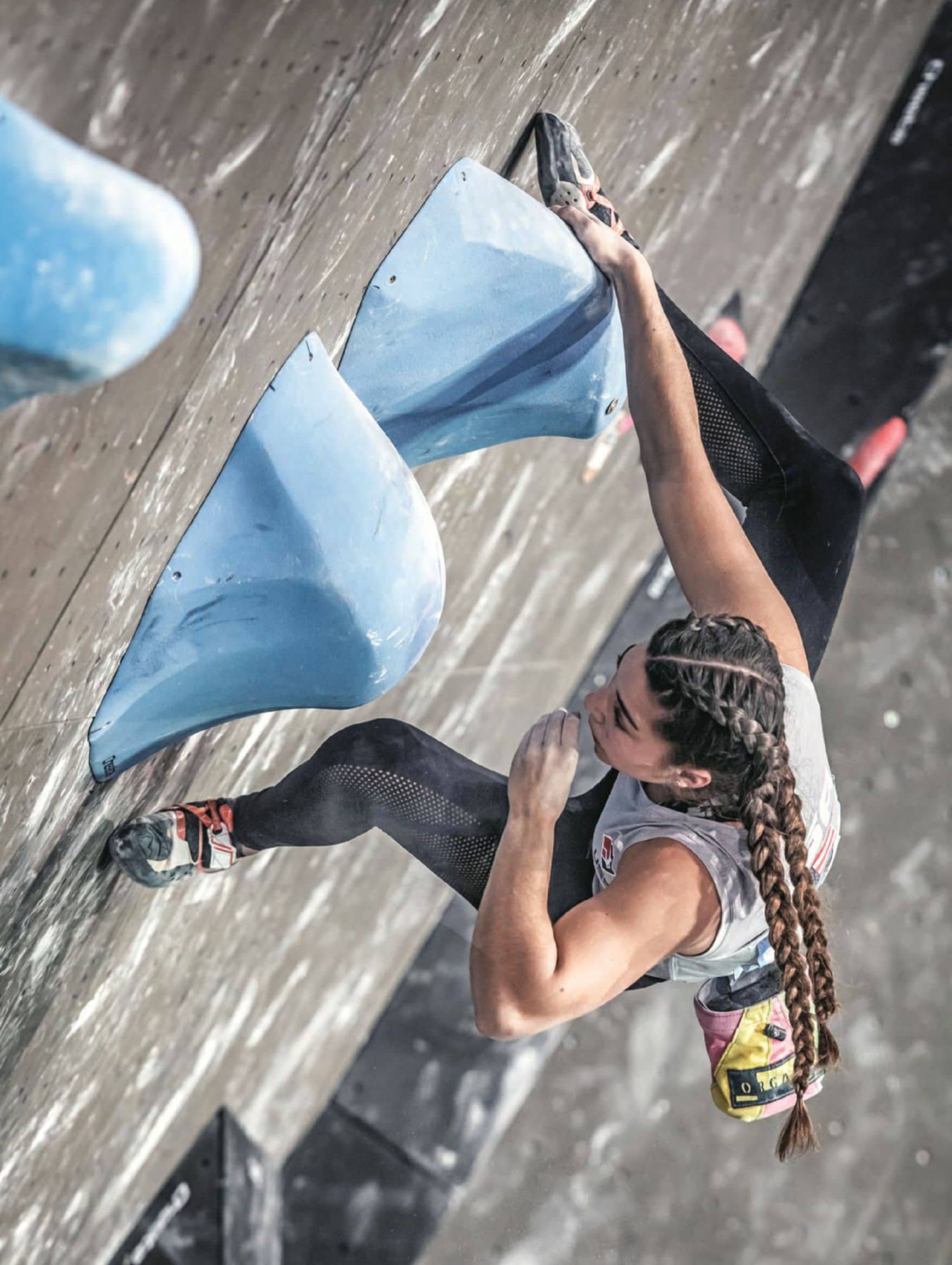 On August 18, Brooke Raboutou stepped up to the final qualifying route for the Combined World Championships in Hachioji, Japan. The stakes were as high as they get— Olympic qualification.

Raboutou barely moved, her eyes fixed on the plastic landscape ahead. The wall was 12 meters, but the route zigzagged to total 15 meters of steep resistance climbing. Her expression was quiet and of utter focus—no room for anything else. Her world had distilled down to this one wall, those 40 holds, those 10 motionless draws, and this chance ahead of her.

When she finally grabbed the start holds, she climbed quickly, with precise and fluid movements. Her feet danced one hold to the next while her hands steered the steady ascent. Upon reaching the headwall, she began shaking her way through final moves with gritted teeth and protruding elbows. By the time she was just a few moves from the finish, gravity won out, and it was clear there was nothing left in the tank.

An hour and a half later the results were in—Brooke Raboutou had finished in ninth, not enough for finals, but enough for a spot in the 2020 Olympics.

A week later I sat down with Raboutou at a small cafe in Boulder, Colorado, her hometown. We found a spot outside on a thin wire table with a view of the bustling parking lot and nearby restaurants. It was a warm and cloudy Thursday morning, and Raboutou was dressed in gym-session attire— running shorts, a tank top, and a light sweater.

“I’m headed to the Tension gym after this,” she said. “Then to dinner with friends and then maybe to CATs (another local climbing center) to just hang out with more friends.”

Following the Combined World Championships, Raboutou had become the first American to receive an Olympic invitation for Sport Climbing in Tokyo 2020. She had agreed to meet on one of her few precious days between landing back in the U.S.A. and returning to college in San Diego.

Her thick curly hair, usually in tight braids, was down. Her nails were neatly painted a metallic purple—“They were the first thing I fixed when I got back,” she said. She smiled as she ordered an iced chai bubble tea with a slice of chocolatechip banana bread.

Names emerged in the corners of my mind while we talked: Debbie Reynolds, Cathy Rigby, Mary Lou Retton, Julia Roberts and Sandra Bullock. Most of these women were or are actresses. Some could sing. Some had talk shows. Rigby and Retton were gymnasts. All were familiar, comforting presences in America’s media. Like Raboutou, they were the picturesque girl next door—tough and honest, strong and delicate, entertaining and sometimes wistful. Raboutou is the type of girl who wears a baby-blue bow in her ponytail while dominating a competition field . In a VL ruthless comp-climbing world, where only 20 female athletes will get an Olympic ticket, Raboutou was, and still is, bizarrely at ease. Getting her ticket was of course a dream, she said. “But I definitely wouldn’t have been disappointed if it didn’t happen,” she added, shrugging and grinning as usual.

Raboutou, 18, was born in Boulder, Colorado. Her parents, Robyn Erbesfield-Raboutou and Didier Raboutou, were both world-class competition climbers. ErbesfieldRaboutou is a four-time Overall World Cup winner and was the third woman to climb 5.14a. Didier, who attended the first international climbing competition, SportRoccia, in Bardonecchia, Italy, 1985, went on to win Arco Rock Master and international events at Vaulx-en-Velin and Bercy, France. Today, he bikes and builds walls.

“I think they’re why I’m the climber I am,” said Brooke of her parents. “They’ve taught me their wisdom.”

Her parents were helping her up walls at the same time she was learning to walk. Robyn started the competitive youth climbing Team ABC, which her son and daughter both joined. Didier built the team’s training walls. As Brooke recalled at the cafe, the coaching didn’t always stop when practice was over. Still, she insisted that her parents never pushed her into climbing.

“That was always their motto,” said Raboutou, “like you should be doing this because you want to ... Which, thank god, because I love it.”

While her dad was mostly hands-off with the team, Brooke worked to navigate the relationship with her mother and head coach.

“We definitely have had to find a different balance,” said Brooke. She paused. “She’s definitely … She likes her plans. She wants everybody to do 100 percent of each thing, which I agree is important. But she’s … intense isn’t the right word. She’s passionate. She’s very passionate about climbing, and she wants other people to be passionate, too, or else she doesn’t really want to work with them.”

Raboutou and her mother had their disagreements, “but now, looking back,” she said, “I’m glad I mostly listened.”

Brooke’s older brother, Shawn, also served as a seasoned mentor. He progressed over the years with Brooke and has recently put down two V16s, Black Lagoon and Off the Wagon Low Start.