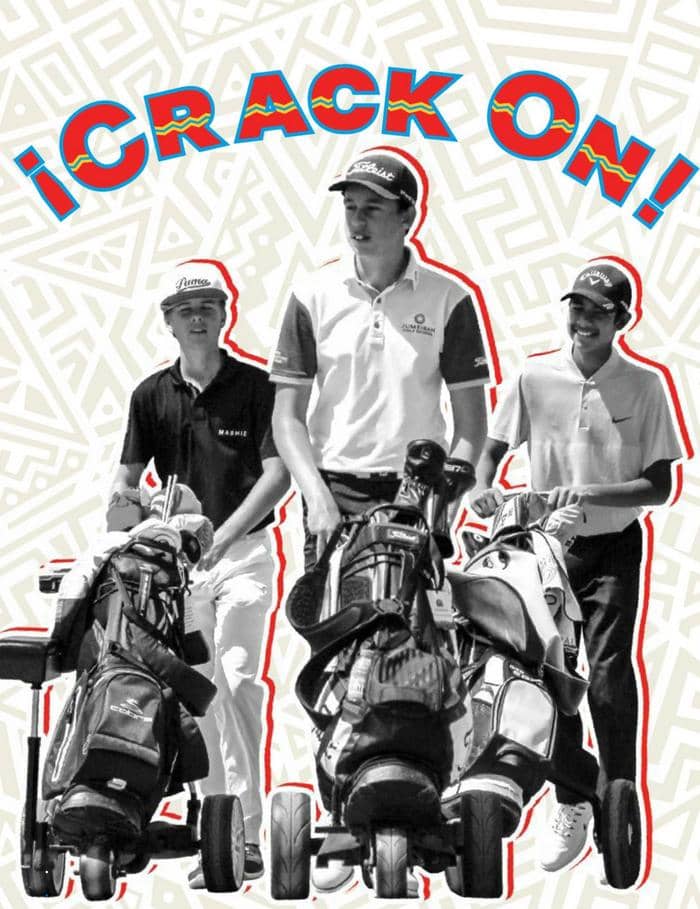 WE’RE NOT SURE IF Josh Hill, Toby Bishop or Arjun Gupta have ever studied the deeds of Winston Churchill in history class but the Dubai schoolboys have, at least unwittingly, heeded one of the former British Prime Minister’s famed quotes. • While topflight professional golf is back, sans spectators, the world’s elite amateur events are only slowly creaking back into life courtesy of the coronavirus pandemic. But channeling Churchill’s circa 1940 “Never let a good crisis go to waste” war cry, the MENA Tour teens are working harder than ever. Indeed, they haven’t really stopped, escaping into the desert for socially-distanced practice sessions even before lockdown when courses were deemed out of bounds to teens for health and safety reasons. • There’s no need to suddenly try salvaging something from what is essentially a lost year when you don’t see it that way. Rather all three have kept on keeping on with carefully plotted progression plans. • Hill is working with a new coach, Bishop is invigorated after committing to the University of Florida and Gupta has refreshed by hitting his school books – knowing the sooner he sorts his education the sooner he can get on with chasing his pro golf dream.• If you’ve been following along, you’ll know the teen trio were dubbed the ‘Three Amigos’ by the MENA Tour in a nod to the 1986 American comedy-western starring Steve Martin, Chevy Chase and Martin Short. You need to draw a longbow to connect Hill, Bishop and Gupta to the Hollywood stars in a golf context, perhaps other than giving this period a movie moniker, something like 2020 global-horror. • But together the talented 16-year-olds have kept smiling and getting on with their young lives, looking forward to the mooted conclusion of the MENA Tour season in Jordan in mid-October to late-November. And brighter, ‘new normal’ times beyond that. — KENT GRAY

THE WAY JOSH HILL’S unforgettable 2019 rolled into 2020, you’d have thought the English Boys’ representative would be cursing the big amateur golf shutdown caused by the coronavirus. Quite the opposite for the +6.5 handicapper (not a misprint!) as it turns out.

As a refresher few will require, Hill earned an entry in the Guinness Book of World Records when he won the MENA Tour’s Al Ain Open last October. The youngest winner – at 15 years, six months and 27 days – of an OWGR event went on to qualify for a European Tour debut in Abu Dhabi and played the following week in Dubai (courtesy of winning the MENA Tour’s amateur Order of Merit), keeping his name in lights. But his game was in a slightly darker place thanks to an uncooperative driver which saw him miss the cut at both Desert Swing events.

“Even though it was frustrating going into lockdown, I felt it came at a good time,” Hill reveals. “I was doing a lot of changes in my swing to help me control the ball better and this probably would have been harder to do whilst playing in tournaments.”

Those changes, instigated by new coach Rob Watts, took some inventiveness to bed in, first during the lockdown in Dubai and later, when flights resumed, at the family home in England.

“Even though I was in a small apartment in Dubai, I tried to keep myself busy and keep improving. Before lockdown, when juniors weren’t allowed to practice at the clubs, we went into the desert to hit balls which was fun. Once we were in lockdown I would hit balls into a net in the communal area of the apartment and I ran in the underground car park and did the best gym session I could with the equipment I had.

“I still did a bit of swing work [in Dubai] but it has been nice to see the ball flight again to know that what I had been working on was working. I played some really good golf before leaving for England and was shooting some good numbers around Trump. Hopefully, I can keep doing this up in the upcoming tournaments.”

Golf news, much less Middle East amateur golf news, has been scarce since the COVID-19 outbreak but if there was a headline popper, it was Hill’s decision to end his relationship with Joe Marshall at the Claude Harmon 3 Performance Golf Academy at The Els Club, Dubai.