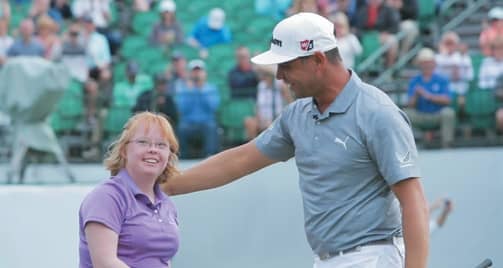 PGA TOUR player Gar y Woodland surprised Amy Bockerstette from Special Olympics Arizona last January with the opportunity to play the 16th hole together as part of his Waste Management Phoenix Open practice round. With a smile on her face and her can-do, “I got this” self-talk, Amy – the first collegiate golfer to compete with an intellectual disability such as Down syndrome – became an overnight sensation.

Her remarkable, parsaving putt has been viewed nearly 44 million times across TOUR platforms and has been featured on the NBC Nightly News, CBS Evening News, the TODAY Show and countless other platforms beyond golf.

One year later, the PGA TOUR celebrated the anniversary of that memorable event by announcing that the TOUR and its tournaments have surpassed $3 billion in all-time charitable giving. The charitable total, which includes a record $204.3 million in 2019 to bring the all-time total to $3.05 billion, includes donations made by tournaments on the PGA TOUR, PGA TOUR Champions, Korn Ferry Tour, Mackenzie TourPGA TOUR Canada, PGA TOUR Latinoamérica and PGA TOUR Series-China.