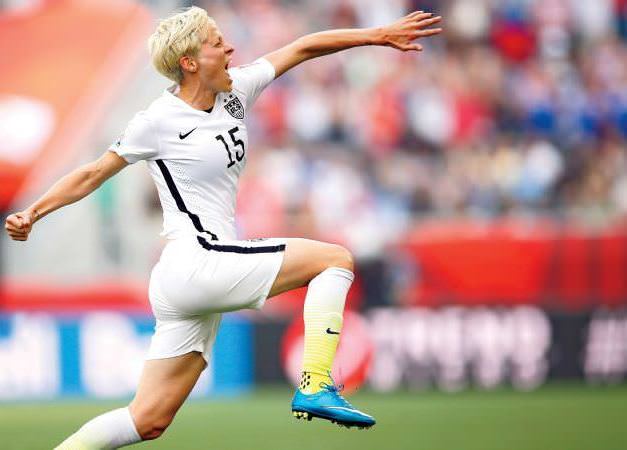 Megan Rapinoe won a World Cup for the USA this year, and shell vie for a second Olympic gold next summer in Rio. Here, the midfielder reflects on how life has changed since she came out in 2012 and where she sees it headed next.

After you won the Women’s World Cup in July, you went on SportsCenter and the one word you chose  to describe yourself was “gaaaay.” Why?

I thought partly it was going to be a little humorous and would sort of break the ice. And what better place to do it than SportsCenter? It was a bit of a double meaning because I was very happy at that time and also very gay.

Is that the most defining part of you?

No, it’s a big part of me, but definitely not the defining thing. I think it’s my joy in life and my charisma. I like that about myself, and I enjoy that kind of exchange I can have with people.

Would you have been able to go on SportsCenter three years ago when you first came out and say the same thing?

Right when I came out? I don’t think so. It’s been a journey and a process of becoming totally out and sort of living that truth and having it be a daily thing. I’m at the point now that I want people to know that, and I want to talk about it. We’re coming so far as a society, but we still have so far to go. So until we’re all the way there, I’ll probably die talking about it.

When will we move beyond the coming-out stories?

Not for a long time, unfortunately. For female athletes, probably sooner than everyone else, but there’s Robbie Rogers [who plays for the LA Galaxy] on the men’s side—and that’s it.

Yeah, he is the only [active] openly gay athlete across all the major professional [team] sports in the U.S. It’s incredibly sad and mind-blowing at the same time. There are plenty of sports teams that say they’re very open and super accepting in the locker room. But are they really? Is it really a safe environment? Have they preset that environment to make these players feel comfortable for coming out? I don’t think so because there’s none out.

Is it the perception that you can’t be strong and gay at the same time?