The Audacity of Peyton Manning 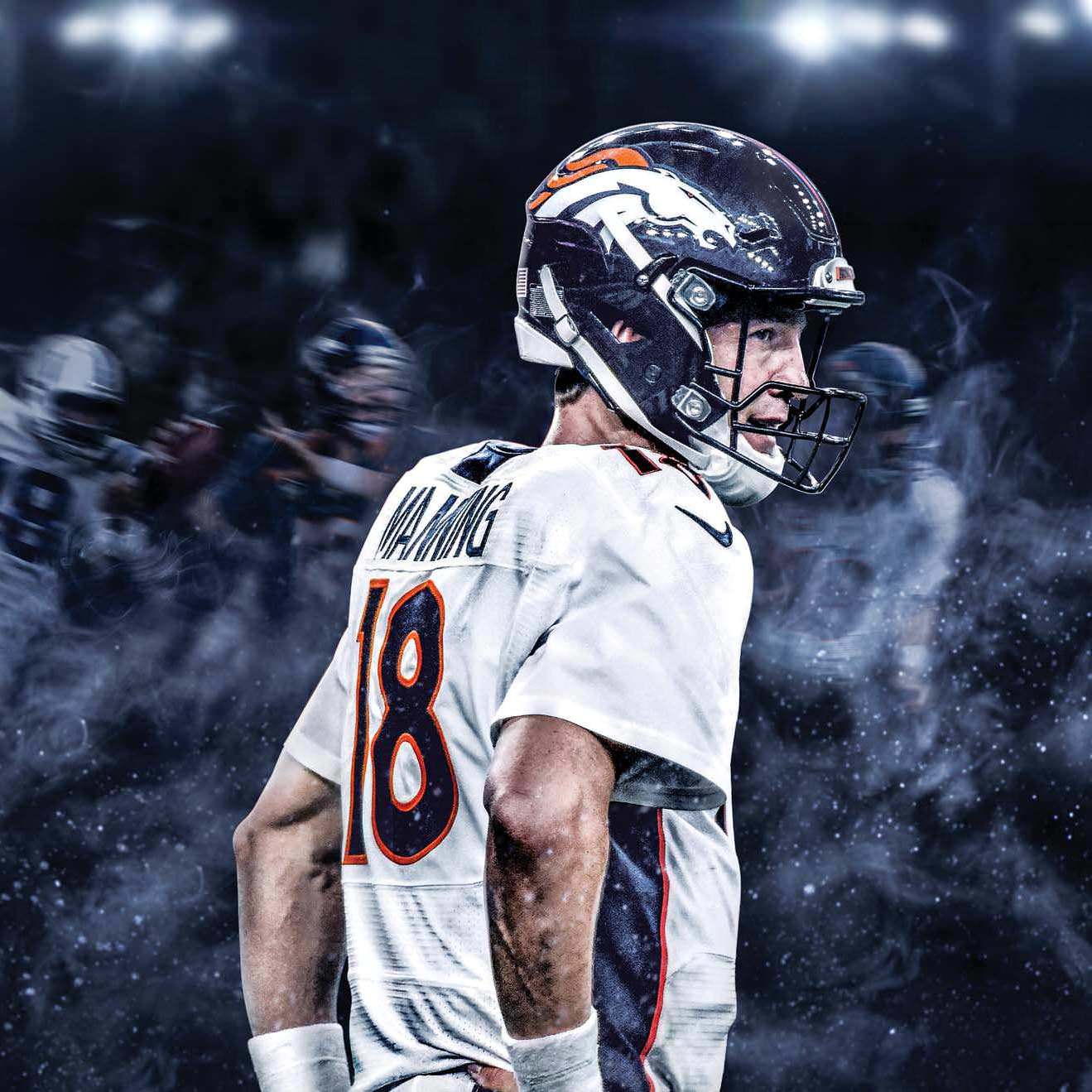 With one of the games greatest minds - and weakest arms - how long can the 39-year-old QB continue his magic act?

It takes Peyton Manning 15 minutes to shed his suit of armor after a game. • He begins with his cleats, which he can barely untie without assistance. A Broncos equipment staffer helps peel them off his feet while he does a radio interview, because after nearly 25 years of football dating back to high school, it’s a relief to not have to bend over that far. Next come his shoulder pads, which, when yanked over his head, generate a groan that is a mixture of suffering and sweet relief. Manning’s pale arms and torso are covered in fresh scrapes and old bruises, some the color of strawberries, others a shade of eggplant. His socks come off after several violent tugs, revealing toes that are twisted and bent into obtuse angles. When he removes a thick blue DonJoy knee brace from his stiff left leg, he twice pauses to grimace and gather himself before stripping it off and handing it to a staffer for safekeeping. As he slices away at the thick layers of athletic tape supporting his ankles, he looks like a surgeon operating on his own leg without anesthesia. 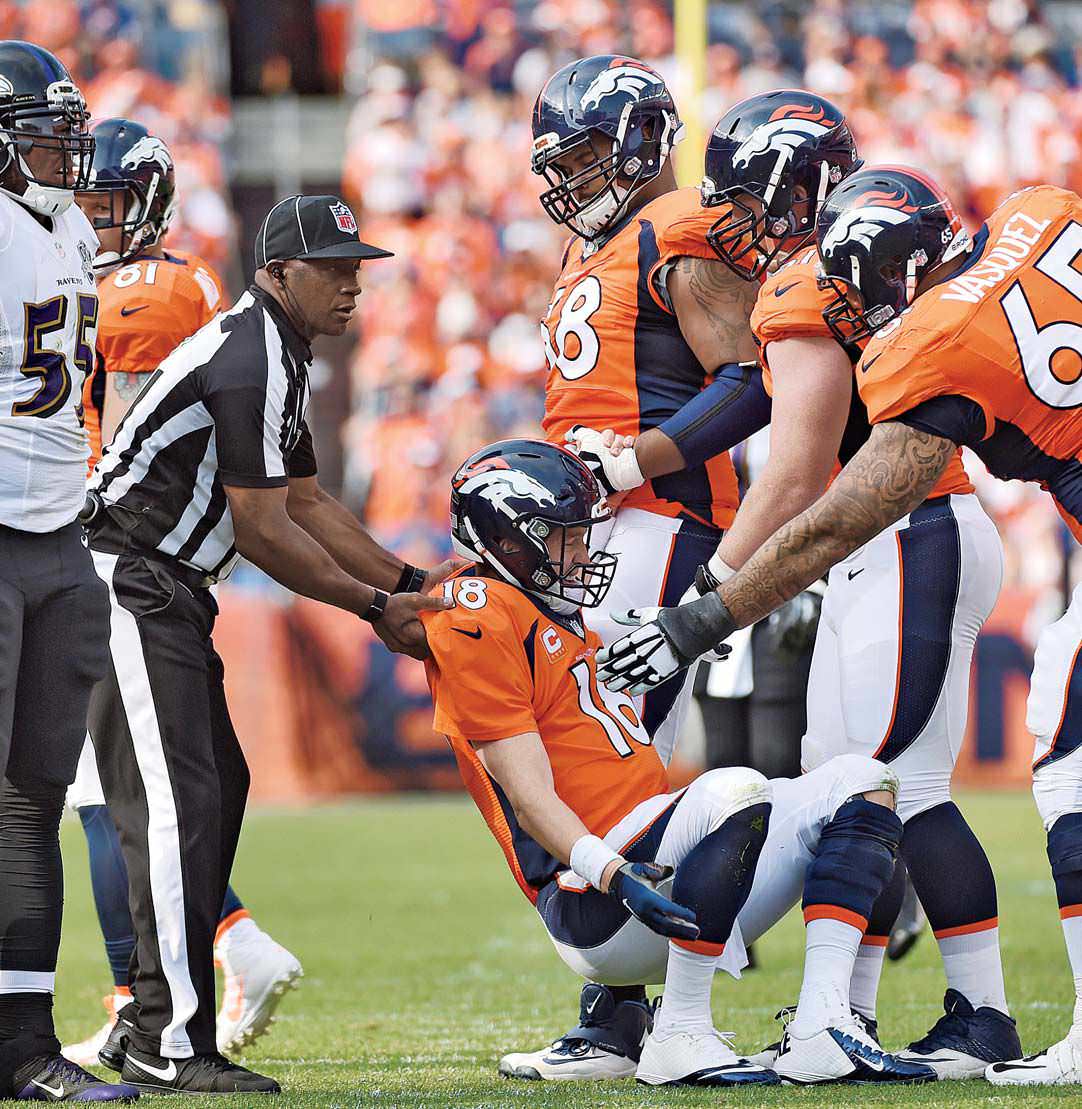 When he finishes, he stands, joints creaking, loose strips of tape and blades of grass still stuck to his skin. He has just completed a comeback win over the Chiefs at Arrowhead Stadium in Week 2, and a flood of text messages keeps pinging his phone, which has a picture of his 4-year-old twins,Marshall and Mosley, as his background. He can’t resist reading a few and smirking with satisfaction. He drapes a towel over his shoulders, but the crooked pink scar on the back of his neck is still visible, evidence of the four neck surgeries he’s had to repair a pinched nerve and herniated disks and to fuse his vertebrae. Because of the victory—the 181st of his career—Manning smiles as he limps gingerly in the direction of the showers. If this is what it feels like on a good night, only two games into his 18th year, try to imagine the bad ones.

It’s hard not to wonder: How much longer can he possibly keep this up?

No one knows the answer, of course. But as the season unfolds, Manning’s act of keeping fans guessing will constitute one of the most fascinating tightrope walks in the recent history of sports.

When you watch him wince and grimace after every hit, when you see his passes float and die in the wind, when he tries to roll out and his feet move like he’s trudging through ankle-deep snow, the only logical conclusion to draw is that he’s done. All his magic used up. No more miracle recoveries. A remarkable career reaching, sad as the truth might be, its logical end.

Then he goes out and fools you again.

It’s a marvel to watch his brain calculate risk in real time, to see him think his way through problems, using some mixture of anticipation and guile to compensate for a throwing arm that’s the weakest in the NFL. Through Week 2, he had a 41.0 Total QBR, 29th in the league. He was averaging just 215.5 passing yards per game with a 58.8 percent completion rate. He’d been sacked seven times. His numbers haven’t been this low since his rookie year. And yet, his team is winning.

Against the Chiefs, every time the ball came out of his hand, it looked like it might float away and be intercepted. Once it was, for a pick-six, his third in a span of four regular-season games. He sulked to the sideline with his hands on his hips, barely giving a halfhearted chase as Marcus Peters galloped toward the end zone. But then the tightrope: Manning came back in the second half and threw a touchdown, ultimately beating the Chiefs for the 10th straight time. In the process, he reached 70,000 career passing yards to join only Brett Favre among NFL quarterbacks, thumbing his nose—at least metaphorically—at the legions insisting he was done.

“I’m not much for speeches,” Manning said after coach Gary Kubiak awarded him a gameball. “But great f---ing win.”

If nothing else, you have to admire the man’s audacity.