How To Raise A QB 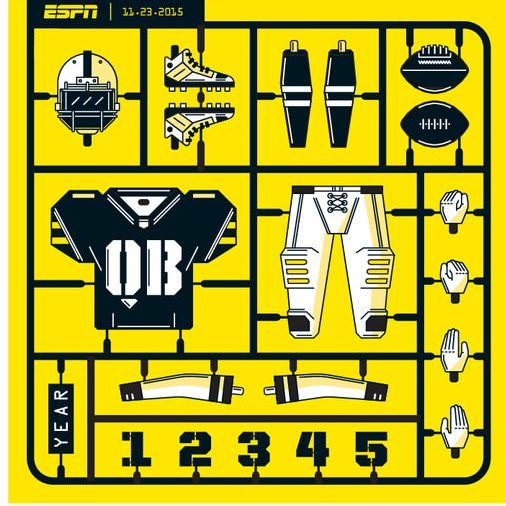 More weight! In The Crucible, Arthur Millers classic play, the townsfolk of Salem, Massachusetts, accuse a man named Giles Corey of witchcraft, and to extract a plea from him, the authorities lay Corey in an open pit and pile heavy stones on his body, one boulder at a time. Yet Coreys only replyto his deathis a command to bring it on: More weight!

IN THE CRUCIBLE of today’s NFL, traditional practices are crumbling away, and the weight of carrying teams is increasingly falling on younger and younger quarterbacks. But instead of succumbing to  pressure—or the doomsaying prophecies of old-timers—the new generation is thriving.

On the Sunday before Halloween, 22-year-old Teddy Bridgewater threw for 316 yards in a Vikings win over the Lions. Blake Bortles, 23, launched a 31-yard touchdown with 2:16 left to lead his Jaguars over the Bills. Derek Carr, 24, amassed 289 yards with three TDs and no picks to lead the Raiders past the Chargers. Ryan Tannehill, drafted in 2012 by the Dolphins, pasted the Texans for four touchdowns and 44 points. Kirk Cousins, also drafted in ’12, passed for three TDs and rushed for a fourth as the Redskins overcame a 24-point deficit to clip the Buccaneers—despite the efforts of 21-year-old Jameis Winston, who threw for 297 yards and two TDs. Young guns have been firing all season—and earning the trust of their organizations. Nearly half the league’s teams are starting quarterbacks who were drafted in the past five years.

The average age of starting QBs across the league doesn’t change much: It’s 29.3 this season, compared with 29.2 in 2010, 29.1 in 2005 and, for that matter, 29.5 in 1975. Any given year will witness a familiar mix: a few superstars who are closer to AARP membership than college, a batch of stable veterans and a handful of bad clubs experimenting at quarterback with recent draft picks. The average performance of 35-year-olds will always be better than that of 25-year-olds because of something financial analysts call survivorship bias—only the best players last in the NFL for a dozen or more years. But here’s what has changed: Clubs are drafting quarterbacks at earlier ages and entrusting them with more responsibility, and on the whole, they are delivering. Since 2011, nine QBs age 23 or younger have started every game in a season 10 times—a historically huge number.

One source for this youthquake is the NFL’s labor deal. The 2011 collective bargaining agreement capped rookie contracts for first-round picks at four years (with a team-option fifth), which limits club expenses but compels organizations to figure out whether young players deserve extensions within their first few seasons. Franchises no longer have the latitude to let a top pick ride the bench for three years, as Green Bay did with Aaron Rodgers. Long before first contracts are up, teams must throw potential starters into the fray, watch them sink or swim and judge their future value.