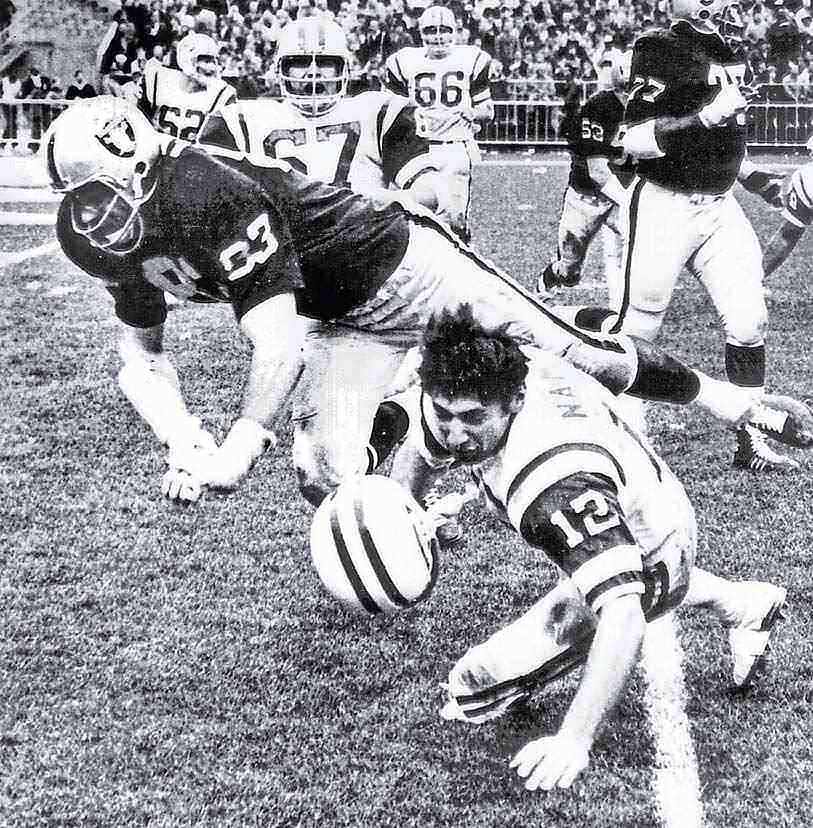 After a life of football, Joe Namath fears he has brain damage. But he's sold on a dubious treatment - and wants others to buy in too.

Joe Namath takes a deep breath. He’s walking the hallways of Jupiter Medical Center, near his home on the Intracoastal Waterway in Florida. At 72, Namath has a gait that is slightly stooped but determined, his grin craggy but still infectious. He greets the men and women at Jupiter by name, hugs the nurses, asks after family members. He chats with fans who approach, encouraging them to stay healthy.

Namath’s eyes sadden a bit as he pauses at a treatment bay where a patient is groaning in distress. “I’ll tell you what,” he sighs, a familiar dollop of Alabama still sweetening his phrasing five decades after his college days with Bear Bryant, who called him the greatest athlete he ever coached. “You see what some of these folks have to go through and you think, ‘There but for the grace of God …’ ”

Namath’s mission nowadays is to give concussion victims reason for hope beyond divine intervention. A few years back, he’d begun to think about his own cognitive issues—they didn’t seem serious, but he wasn’t sure. He occasionally wondered why he had just walked into a particular room or lost track of his keys. He also struggled with depression. Namath thought about the bone-crunching blows he had taken in his pro career—knocked cold at least five times, with no treatment except smelling salts. And he pondered the fate of old comrades, struggling through the aftershocks of concussions years after retiring from football, living in fear of losing their minds.

In 2012, he began an experimental hyperbaric oxygen treatment from two doctors at Jupiter. Neither of them was a neurological specialist, but after 120 trips into Jupiter’s oxygen chambers, Namath perceived extraordinary improvement in his brain function. And ever since, he’s been telling the world—friends, teammates, reporters— about the benefits of his therapy. Last September he and Jupiter officials launched the Joe Namath Neurological Research Center. With great fanfare, they announced their goal to a throng of media at the Grand Hyatt Hotel in New York: to raise $10 million for a clinical trial of hyperbaric oxygen on 100 subjects suffering from symptoms of brain damage. Namath would be the lead fundraiser and cheerleader for the project.

The Hall of Fame quarterback has never been conventional, and he knows what he’s selling is a leap beyond the fringes of accepted science. To many experts, the endeavor raises serious concerns. But to Namath, the truth is as simple as the air we breathe.​

FOR THOSE WHO watched Joe Namath’s career up close, it wasn’t just his Super Bowl win or his swinging lifestyle that made him a hero but also the staggering pain he endured without complaint. Namath’s right knee first gave out while he was still in college. In 1965, the Jets introduced him to the New York media at a news conference at the legendary Toots Shor’s. The team orthopedist took Namath into the bathroom to examine him and was horrified at the damage: He thought Namath might never play again even with surgery. Ultimately, Namath had an operation and gritted through more than five seasons without missing a game, but he began seriously breaking down in 1970. Namath battled through torn ligaments and three more knee surgeries, a broken wrist and a separated shoulder, playing a full season just once after the age of 26.

Doctors routinely treated his pain with Percocet and Butazolidin, an anti-inflammatory typically used on horses. They told him to take the medications on a full stomach; concerned about staying in shape, Namath washed them down with Johnnie Walker Red instead. (Later, he switched to vodka.) Many narrative strands are tangled in his tortured relationship with alcohol: a guy out of the steel-mill town of Beaver Falls, Pennsylvania, enjoying the perks of superstardom; a heavy drinker losing his grip on sobriety; a man living like there’s no tomorrow because he can’t imagine what new hurt the next day will bring.

Throughout two decades of alcohol abuse, Namath was still one of America’s most sought after pitchmen, hawking wares from Noxzema shaving cream and Beauty Mist panty hose to Ovaltine drink mix and Brut cologne. He was ready to tone down his bachelor ways after he married Deborah Mays in 1984, and she helped him stop drinking. Namath says he was sober from 1987 to 1999, a period in which he got both knees replaced and was happy to dote on his young daughters.

But after Mays left him for a Beverly Hills plastic surgeon in 1998, Namath eventually went back to medicating his pain with the hard stuff. He bottomed out on Monday Night Football in December 2003, boozily swooning over sideline reporter Suzy Kolber. While one generation of fans remembers Namath for saying “I guarantee it,” its kids are more likely to know him by the humiliating catchphrase “I want to kiss you.”

After that, Namath sought help: He checked into rehab, and he stopped drinking on Jan. 12, 2004, the 35th anniversary of Super Bowl III. He emerged ready to attend Alcoholics Anonymous meetings and battle through his depression. And it was as if he found himself blinking in unexpected sunlight after a long winter’s night. It turned out that Namath’s daughters still adored him. His old teammates still wanted to see him. Fans still loved him. The endorsements had dried up, but for the first time in years, Namath could flash his famous smile at himself in the mirror and feel great, so great that it was hard for him to believe he deserved his good fortune. Maybe there was something to the St. Jude medal he had worn for decades, dedicated to the patron of lost causes. There but for the grace of God indeed.

After his physical rejuvenation, Namath began to hear about athletes who couldn’t shake the mental effects of their playing days. It’s often said that NFL Nation wasn’t aware of the dangers of brain injury until recently, but that’s not true. Plenty of players, teams and league executives—and fans too—suspected for a long time that terrible things could happen to athletes who repeatedly got smashed in the head. In more careless times, however, football shrugged off concussions as a casual inevitability.

In 1979, for example, when Namath was the man of the hour on The Dean Martin Celebrity Roast, comedian Charlie Callas staggered to the podium pretending to be “O.J. Simpleton,” a former Jets lineman. “He gets all the glory while we get all the injuries,” Callas cracked, referring to Namath. “Look!” he added, taking off his helmet to reveal a giant bandage wrapped around his head. “I’ve had the same concussion for 15 years. My vision is blurred, my speech is sl-sl-slurred, I g-get dizzy spells and I can’t walk straight.” “I’ve had that for years,” the oft-plastered Martin quipped. The crowd roared with laughter.

Three decades on, jokes like those hit Namath disturbingly close to home. There was the death of Mike Webster, then the suicide of Dave Duerson, then the sad decline of a real-life O.J. Simpleton named Dave Herman. A Pro Bowl guard for the Jets, Herman blocked for Namath for nine seasons, but toward the end of his career he couldn’t remember details of games the next day. His short-term memory problems worsened, and he worried that he might have Alzheimer’s disease. Herman had been a regular at Namath’s football camp in Connecticut since the 1970s, and a few years ago, he shared his concerns with his old teammate, wondering if he would even be able to return the following summer. “You could just see the fear in his eyes,” Namath says.