Emmanuel Mudiay Is Not Scared 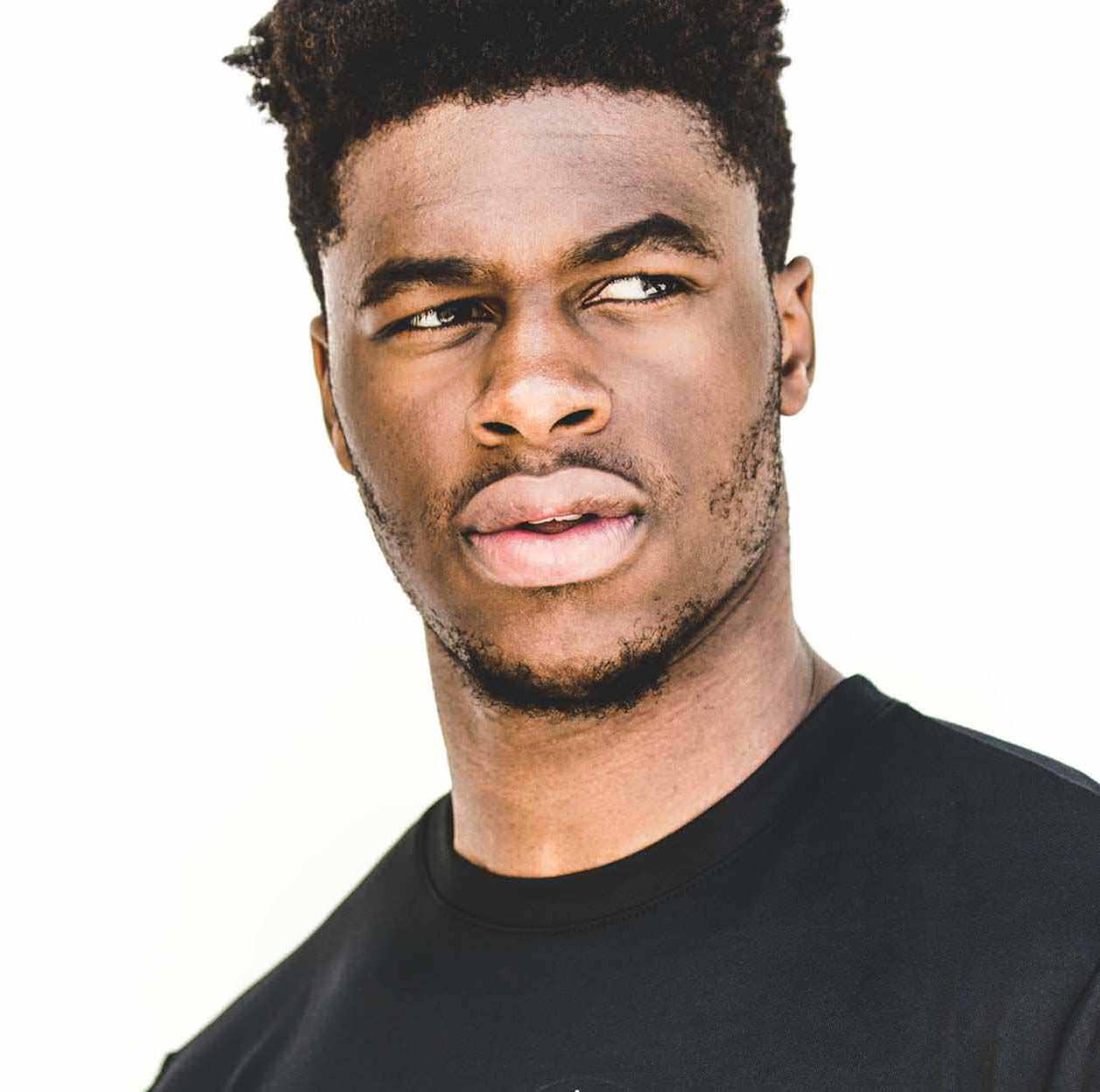 War-torn Congo, chaos in Dallas, injury in China - nothing has stopped this 19 year-old point guard yet. Can the NBA?

In the back of a dimly lit ballroom at a midtown Manhattan hotel stands the 19-year-old many consider the most exciting talent among incoming NBA rookies. He is 6-foot-5. He wears his hair in a small, fashionably tousled puff. He smiles broadly. Nobody notices.

The room is full of sports writers eager to talk. But most ignore Emmanuel Mudiay. He settles his long-fingered hands carefully inside the pockets of his slim blue suit and waits. He is accustomed to this, “sort of sneaking up on people,” he says. “I like it that way.”

The ones being pushed toward the cameras at the draft lottery on this May night are the collegiate standouts. They’ve been on magazine covers. They’ve battled through March Madness.They’ve been seen by millions. There is Duke’s Jahlil Okafor, natty in a gleaming brown suit with a red handkerchief peeking from a chest pocket.There is Wisconsin’s Frank Kaminsky, ruffled and reedy. “Frank the Tank!” bellows the master of ceremonies. “Frank the Tank!” There too is the player almost everyone assumes will be taken first—Kentucky’s Karl-Anthony Towns. When he walks past, square-shouldered and focused, someone blurts: “Oh, look, Towns! It’s Towns!”

Mudiay? He’s surrounded by silence, until finally, a reporter sidles up. Then another. It’s hardly a scrum.There’s a centered, soft-spoken stillness about him. As he answers their questions, the two reporters are forced to lean in to hear. After a minute passes, they leave. Mudiay slips behind a gray curtain and heads back to his hotel room.

He is the first basketball player from an American high school to skip college and go straight to Asia and play for the Chinese Basketball Association. (Brandon Jennings paved the way in 2008 when he went to Italy.) Few Americans know Mudiay. Fewer have heard of his Chinese team: the Guangdong Southern Tigers. Even fewer have seen him play.

His peers have followed the slickly paved,tightly controlled path to the NBA: prep stardom followed by college stardom. They are young and eager, possessed of a kind of gushing awe.

Mudiay is different. He’s seen too much, lived too much, his life filled with more turbulence and uncertainty by 19 than most NBA players will encounter in their lifetime. He’s ready for the pressure to lift, for the deadline to arrive.

He’s ready to be noticed. 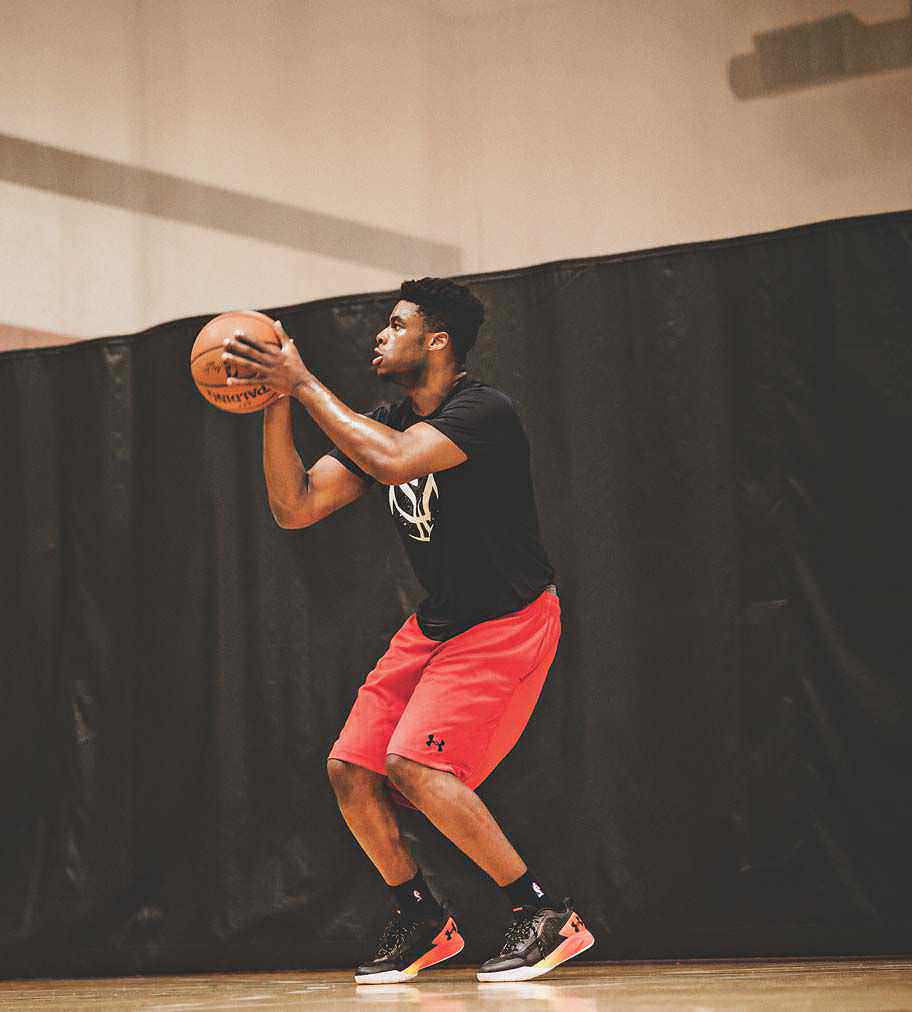 TWO NIGHTS AFTER the lottery, at a tony prep school in Manhattan, Mudiay is polishing his perimeter game. His form is elegant—a metronomic rise from slender ankles past sturdy hips, guided by sinewy, outstretched arms. For stretches, however, he misses as many shots as he makes. He leaves the court, brow tight with frustration, vowing that he will “keep on grinding.” Two weeks later, inside a Dallas gym at almost midnight, he continues pushing, driving himself to exhaustion. This time he hits 17 of 20 from deep, including eight 3-pointers in a row.

He’s lived with a monkish devotion to basket ball since he was a kid, says he thrives off the “mind-clearing release.” He counts on one hand how many late-night parties he’s attended. He’s had one small glass of alcohol, in China, when he worried that not finishing the wine poured for him at a team banquet would be viewed as a cultural affront. He spends free time with family.

His skills are rare for someone nearly six and a half feet tall. He dribbles low and nimbly. His feet pad across the court almost soundlessly. His hands are large; he palms the ball with ease. His bounce passes skim with a casual flick.

Three weeks after the lottery, he invites reporters to a sprawling gym in the San Fernando Valley, north of downtown Los Angeles. One is Mark Heisler, who has covered basketball for the Los Angeles Times, The Philadelphia Inquirer and others since the 1960s. Mudiay sprints and cuts and launches toward the rim, unfurling a series of tomahawk jams. “Explosive. Wow!” Heisler says, wide-eyed. He compares Mudiay to Russell Westbrook, Derrick Rose, a young Kobe Bryant—even to Elgin Baylor. “I knew he was an athlete, but wow, I wasn’t expecting this. It’s possible that the moment he turns pro, he is the most athletic point guard there has ever been.” Heisler pauses. He adds a dose of caution, the same dose NBA execs have added. “Right now, remember, he’s working out against air.”

INSIDE THE BEIGE living room of the Mudiay family residence in a working-class, mostly black subdivision in Dallas, Emmanuel sits alongside his mother, Therese. The home is tidy and no-nonsense: black couch, midsize flat-screen TV, Oriental rug lying atop wall-to-wall carpet. The only artifact suggesting this is where an accomplished young athlete spent his high school years is a square plaque given to Emmanuel for being named outstanding player at a basketball camp.

It’s almost as if it’s not Emmanuel’s home. In many ways, it’s not—born, as he was, nearly 8,000 miles south and east, in the Democratic Republic of Congo (formerly Zaire), a country that was mired in war during his early childhood. “Pressure?” he asks. “I was born into pressure that is bigger than basketball. When I’m playing, I will flash back about something that happened when I was younger, and I use basketball to take it out on that.” A beat passes. He rubs his hands together. “But the past I don’t talk about much. My mom always says, ‘Don’t go around carrying scars.’”

Emmanuel was the baby of the family, just 1 year old when his father, Jean-Paul, collapsed at a barbecue and died. Emmanuel’s brothers, Stephane and Jean-Michel, were 7 and 5; civil war was raging around them, President Mobutu Sese Seko clinging desperately, and in the worst way, to power. “Gunshots and protests and chaos,” Therese says, her halting English laced with a French accent. “Chaos. Total chaos.”