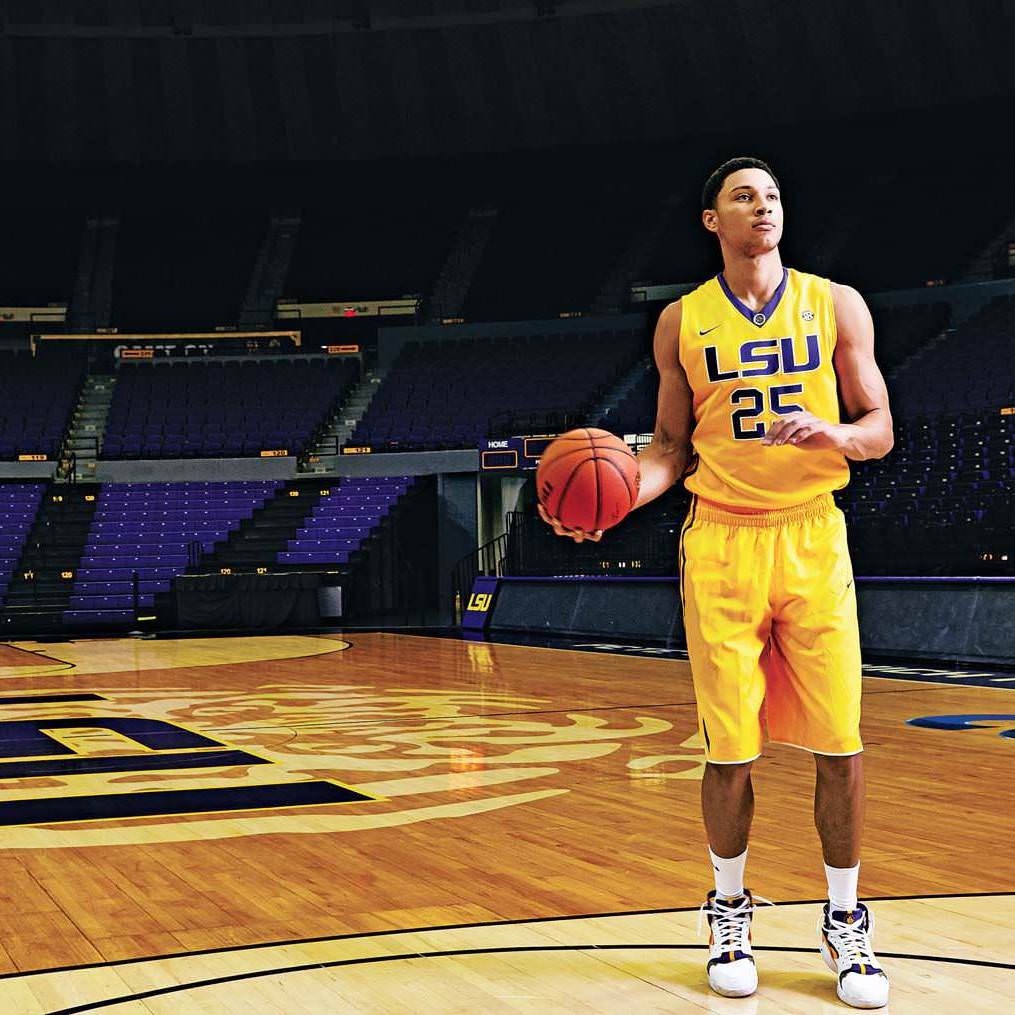 Melbourne native Ben Simmons could have played anywhere in the world. So how did the top-ranked freshman end up in Baton Rouge?

Kickoff between Auburn and LSU is still two hours away, but the main artery around Baton Rouge’s Tiger Stadium is barely passable. As four towering basketball players try to snake their way through the masses, a man passes by, his long hair spilling from under a white baseball cap, an LSU T-shirt wrapped across his barrel chest. Without breaking stride, he folds his hands in prayer and casts his eyes upward, as if to the heavens. Instead, he’s staring up at Ben Simmons, the 6-foot-10, 19-year-old freshman who has traveled from Australia to resurrect LSU from its swampy hoops grave. “Please, God,’’ the LSU fan says, “just beat the hell outta everybody this year.’’

There have been a few saviors in high-tops here before—Pistol Pete, Shaq, Big Baby—but not like this. Simmons is the No. 1 freshman basketball player in the country, which makes him the No. 1 college player in the country, an athlete so gifted he defies a position (hybrid point center might be the most accurate). Not coincidentally, his choice to break rank from traditional college hoops powers and don purple and gold has raised more than a few eyebrows, the rumor mill percolating like a good pot of gumbo. Surely money was exchanged, critics have carped. LSU even took early criticism in May for a ticket-sales campaign proclaiming “He’s Coming,” alongside Simmons’ No. 25. 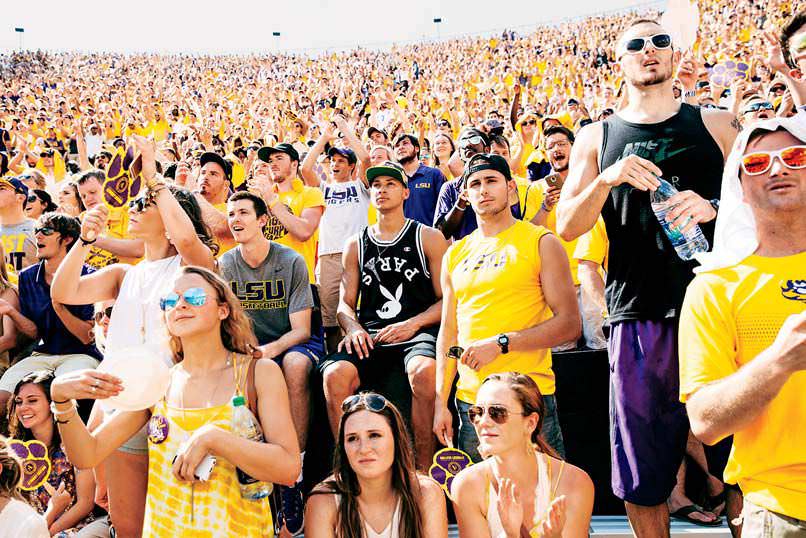 But now that he is actually here, the revival is on in all its full-throated glory. Crisscrossing through the starstruck crowd to his seat for the mid-September football game, Simmons finally finds anonymity among the 102,320 other spectators. It doesn’t last long. At the end of the second quarter, he escapes the heat, heading to the cool bowels of the stadium and running straight into the biggest man on campus, the Big Aristotle himself.

Shaquille O’Neal called Simmons “the best player in the world” when he introduced him to his Instagram followers last November. When the two reconnect, just a day after officially meeting, they bro hug in the casual way men do. Shaq says something quietly before he’s pulled away by a group of girls looking for a picture. As he squats down to pose, he pauses, stretching out one long arm and tugging on Simmons’ shirt, motioning 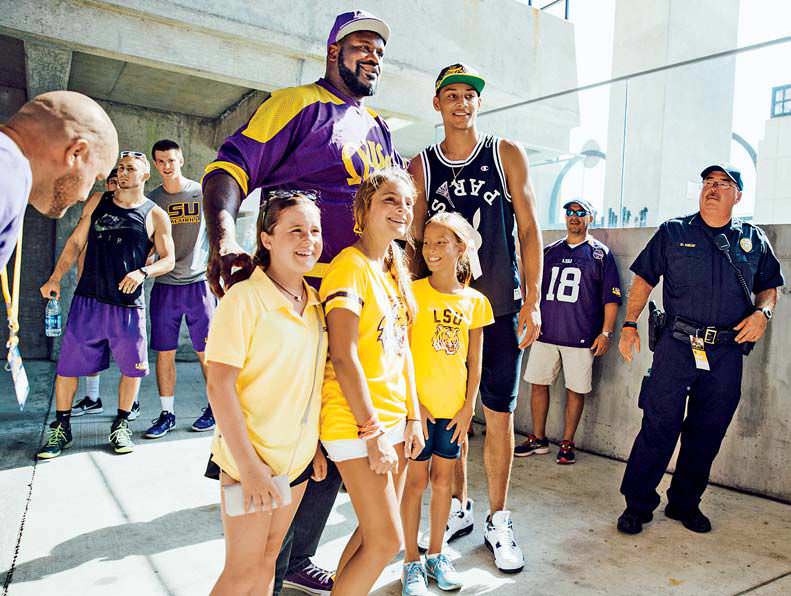 EVEN AT A casual pickup game on campus, Simmons and his teammates have managed to draw a crowd. Keith Hornsby, son of Bruce and the top returning scorer, is on the court; so are Tim Quarterman, the junior who has played himself into a top pro prospect, and Antonio Blakeney, a McDonald’s All American.

Simmons stands on the wing, dribbling and waiting for an open seam. He finds his crease, heads toward the rim and passes. The no-look kick-out is brilliant, the perfect setup for a clean look as everyone else collapses toward him. On the next possession, he corrals a rebound and uncoils his legs almost casually before springing up and slamming a one-handed dunk that makes those under the stanchion shake. In the words of Shaq: “He’s the real deal.

Maybe so, but don’t count on Simmons to buy the hype. Humility, after all, comes easily when you’re the youngest of six. Even now, his brother Liam doesn’t miss an opportunity to take a dig. “It’s like when he went to the ESPYS, he’s meeting all these cool people, hanging out with million aires,” Liam says. “He’s like, ‘I saw J.J. Watt. We were hanging out.’ And I’m like, ‘Dude, J.J. Watt is not your friend. You don’t have any money. Mom wants you home by 10.’ ’’

“Yeah, I didn’t really get away with anything,” Simmons says. He pauses, perhaps realizing his siblings will read this. “Well, I mean I got away with some things.”

Growing up in Melbourne, Simmons hardly felt like a prodigy among his siblings. He’d always get picked last when the kids chose sides for a game, for instance. The man? The real deal? No, he’s Benny, the runt of the family who was stuffed in the car like an extra pair of sneakers, packed off to watch someone play something somewhere.

Melissa, Emily, Liam and Sean are mom Julie’s children by a first marriage. Julie, a divorced single mother, was working as an aerobics instructor in 1991 when she met Dave Simmons, a Bronx-born basketball player recruited to the Melbourne Tigers, the local pro team. Three years later, they married and soon added Olivia and Ben to their brood.

The age gap between the kids is huge—Melissa is 15 years older than Ben—but it’s the only one dividing the family. They are inordinately close, raised as brothers and sisters, not half this or half that. “They helped him grow up,” Julie says. “He’s an easygoing, quiet kid, but he also has a cheekiness to him.”