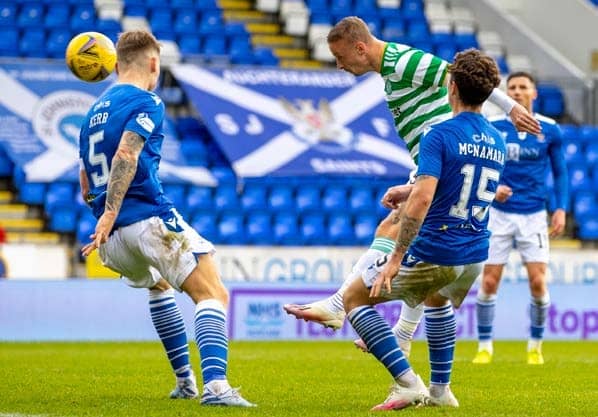 Leigh Griffiths returned to action at the weekend and had an almost instant impact, scoring a 90th-minute opener against St Johnstone

LEIGH Griffiths’ last outing in the green and white Hoops came back on March 7, when he hit a hat-trick in a 5-0 victory over St Mirren, a match that ultimately proved to be the last fixture of the 2019/20 season.

The striker netted eight goals on his return to the team in 2020 and helped the Hoops secure their ninth league title in a row.

Following the lockdown and subsequent return to training and competitive football for the champions, Griffiths has faced a well-documented battle to get back to full fitness and earn his place in Neil Lennon’s squad.

He has done that, and having been an unused substitute in the previous two games, he was called into action with just under 15 minutes of the match remaining at McDiarmid Park, replacing Odsonne Edouard with the game goal-less.

And as the match entered the 90th minute, Celtic’s No.9 produced a superb finish to put the Hoops ahead, with fellow substitute, Patryk Klimala, adding a second in added time to ensure Celtic go into the international break unbeaten in the league after nine games, with eight wins and just one draw.

Naturally, Griffiths was delighted to be back on the pitch doing what he does best and even happier that he was able to help the team record another victory.

Kris Ajer showed some great footwork down the right before sliding the ball into Hatem Elhamed’s path, and the Israeli internationalist’s perfect cross was met by the head of Griffiths, leaving St Johnstone keeper, Zander Clark with no chance.