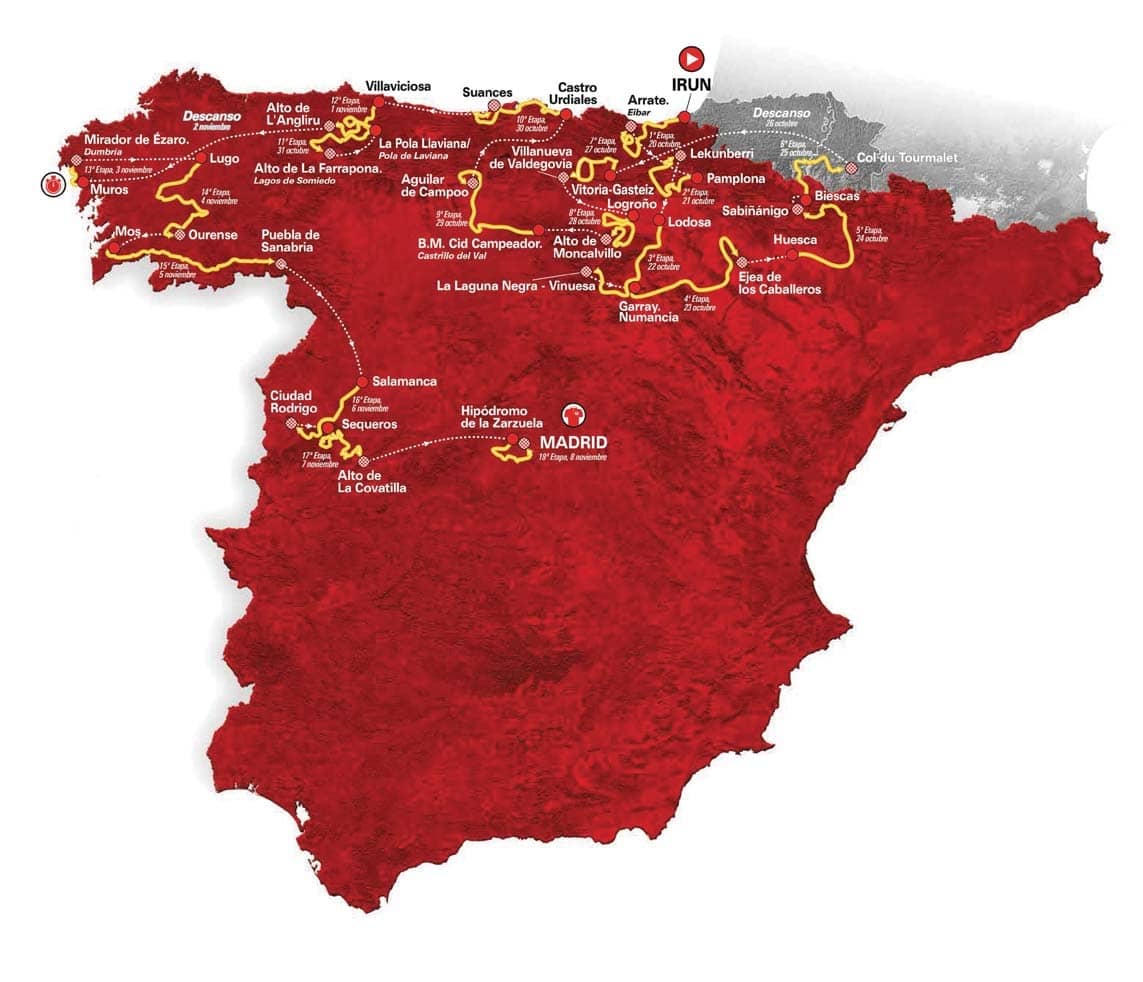 With Covid-19 putting paid to plans for three opening stages in the Netherlands, the Basque Country will instead host the beginning of the Vuelta for the first time since 1961.

This will also be the first time since 2007 that the Vuelta has begun with a road stage, meaning punchy climbers will get to duke it out for the red jersey as well as the stage win on the uphill finish to the Sanctuary of Arrate. A regular in the Tour of the Basque Country stage race, Monte Arrate constitutes 5km of densely wooded and very steep, narrow road.

If what happened the last time the Vuelta visited in 2012 is any indication, the climb will set the pattern for the rest of the race: that day, the four riders who broke clear from the rest of the peloton, Alberto Contador, Alejandro Valverde, Joaquim Rodríguez and Chris Froome, were the eventual top four in the general classification.

Unlike those attending the annual running of the event of the bull held as part of the San Fermin festival, the riders won’t have to make too much haste leaving Pamplona, as the day’s significant climbing does not kick off until 125km later with the category-one, 10km-long San Miguel de Aralar.

Italian climber Fabio Aru won the last time the Vuelta featured this climb in 2014, but this time the riders will descend for 17km upon summiting towards a finish in Lekunberri. Nevertheless, the double-digit gradients and rough concrete surface towards the top should provoke gaps between the favourites big enough to maintain to the finish. 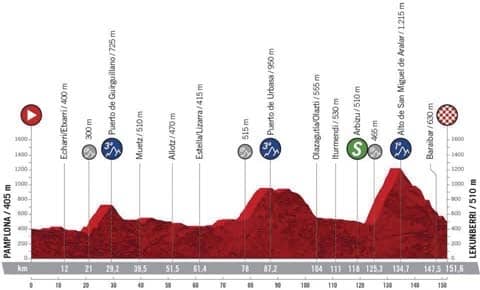 Even by Vuelta standards, these opening three days are tough. Once again a major climb features at the end (to Laguna Negra, making its Vuelta debut), and once again those aiming for overall victory will have to bring their A-game.

This climb is a different prospect from what’s come before, however. Its final 8km of over seven per cent is preceded by 10km of false flat, meaning that it will require more of a steady effort than the short, punchy bursts of the last two days. And even before the riders reach its base, they’ll have gained about 800 metres in altitude due to the steadily ascending roads of the stage’s first half; the summit, which overlooks a gorgeous lagoon, is 1,700 metres above sea level, making it the third highest point of the whole race.

Again, the gaps won’t be huge, but we’ll already have a good idea of which select few will be competing for the red jersey. 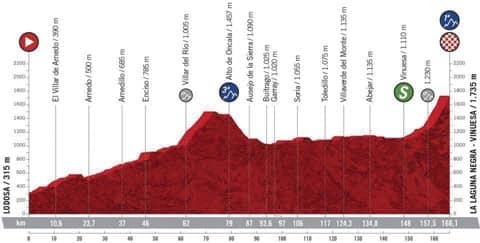 Numancia is famous for being besieged in the 2nd century BC when the local settlers refused to surrender to the invading Romans despite facing impossible odds. Their stubborn resolve in the face of futility is shared by the sprinters at this year’s Vuelta, who have decided to ride despite a distinct paucity of opportunities offered to them by the route.

They do have a chance today, however, in a stage that does not feature a single categorised climb.

So a bunch sprint is guaranteed and you can tune in at the end in the certain knowledge that you won’t have missed much? Not necessarily. As the riders enter the central lowlands of Aragon, they’ll be exposed to open plains that, if the wind is strong and blows in the right direction, could cause havoc in the peloton. Given that it’s October, a couple of months later than the Vuelta’s usual time-slot, the chance of blustery conditions is greater than usual, so this could instead become a battle between the GC favourites in the crosswinds.

The last time Sabinanigo hosted the Vuelta in 2016, Nairo Quintana caught a sleeping Chris Froome off-guard by attacking with Alberto Contador and others at the start of the stage and went on to gain almost three minutes over him and land a fatal blow in the battle for overall victory.

This is unlikely to be quite so dramatic. The first and easiest climb that day, Alto de Petralba, will conversely be the last and toughest of today’s three ascents, a moderate category-two effort that will likely provide the launchpad for a race-winning attack from a breakaway specialist. A 16km descent to the finish, plus the prospect of the Pyrenees tomorrow, should be enough to convince the big guns to keep their powder dry.

When the Tour de France ventured into the Pyrenees for the first-ever a time in 1910, Octave Lapize, who won the race that year, accused the organisers of being ‘assassins’ for expecting them to climb such preposterously difficult mountains. That earned the route used that day the nickname ‘the circle of death’, and the climbs have since held a mythical reputation. 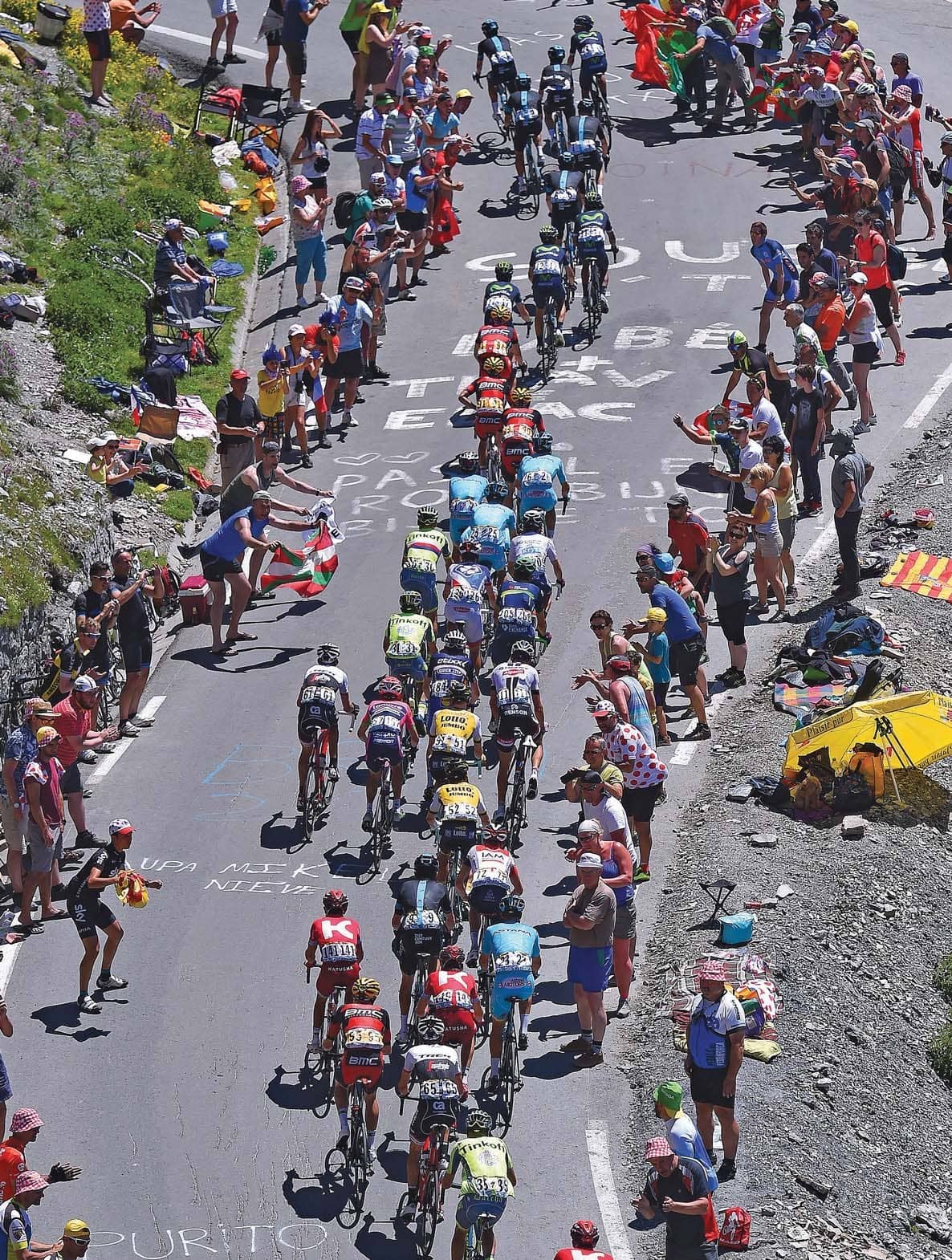