HOW TO BEAT A PRO ON ZWIFT? 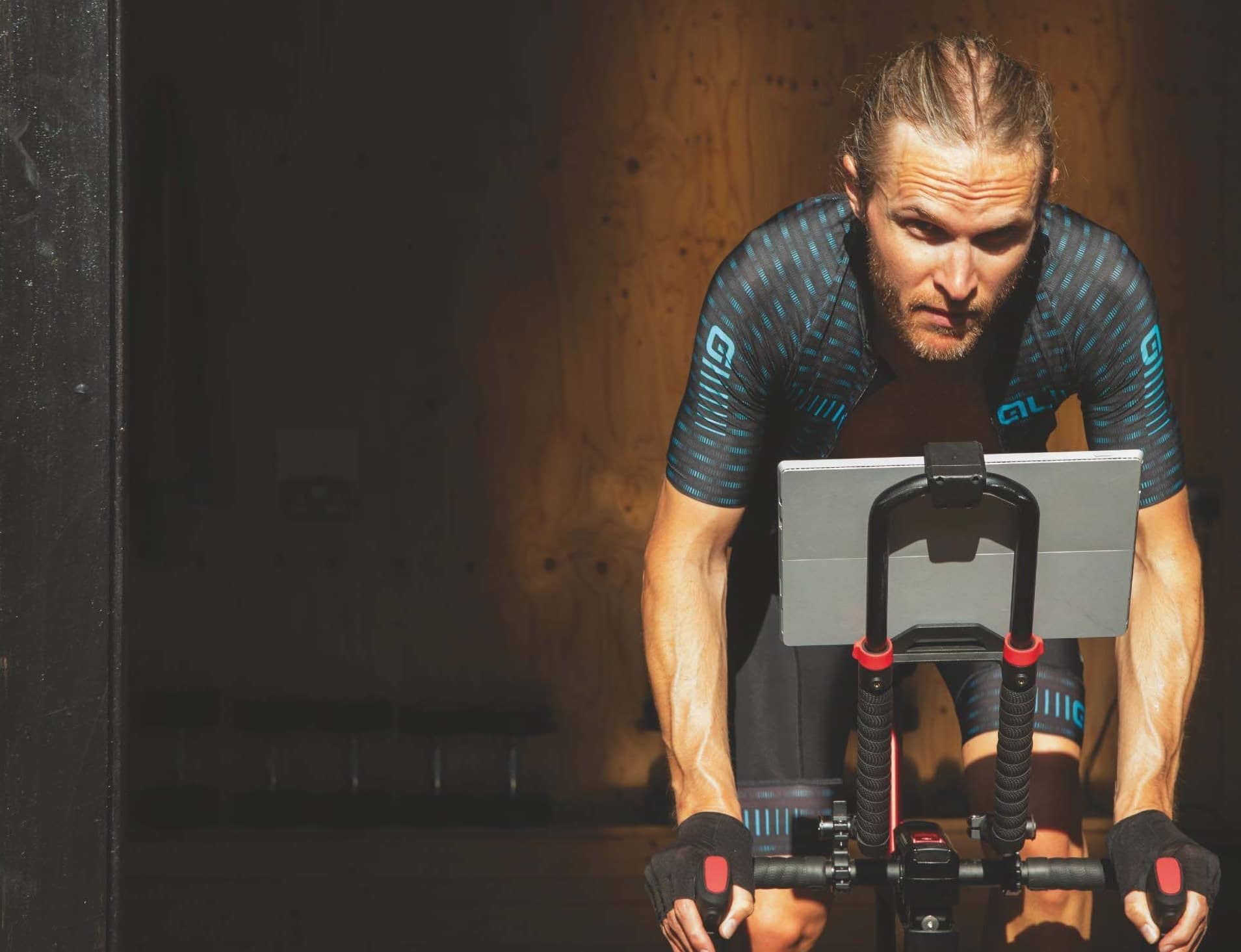 If even WorldTour pros can’t win on Zwift, what chance do the rest of us have? David Bradford tracks down the giant-slayers of the virtual world and begs for their secrets

David Bradford
What fresh hell is this?” I’m standing up, wrenching every last microjoule onto the Wattbike pedals, eyes glued to the iPad: 360 watts, 375, 400, briefly touching 415 as I’m forced to accept that, whatever I have left, it’s not enough. Watching fast-pedaling avatars line out ahead single-file like over-stretched elastic, I’m anchored at the sore end for the imminent snap. We’re merely six minutes into Ronde van Zwift – a virtual substitute (of sorts) for the Tour of Flanders – but my day is done. In honour of the real Ronde, cancelled because of Covid-19, Zwift had invited the Alpecin-Fenix team, along with a selection of the world’s best Zwifting specialists, to do battle over 27.6km, three laps of its hilly Richmond course. Standout favourite for the win was naturally Mathieu van der Poel, he of apparently limitless talents. And what am I doing here? I was invited to join a euphemistically tagged ‘all-stars’ team of journalists and guests; AKA cannon fodder.

The rest of the race is for me a lonely TT to the finish. On a separate screen, I watch the video feeds of the leading riders on their turbos in their respective homes, faces grim with determination, in and out of the saddle, sweat pouring. With eight kilometres to go, Alpecin-Fenix’s Louis Vervaeke launches an attack, but it’s swiftly countered by Canadian triathlete Lionel Sanders, riding as a guest on the Canyon Zwift CC team.

The whittled-down group of four remain together until just before the final ascent of Libby Hill, with 4km to go, when Sanders activates an aero power-up and explodes off the front. It’s a jawdropping moment; he holds nigh-on 8w/ kg – that’s 580 watts – right to the top of the climb. Fully committed now, he grits it out, veins bulging as he holds 6.5w/ kg for the next 3km, before somehow turning the screw even further, up to 600 watts, to fend off a stupendously powerful sprint by Swedish cross-country MTB racer Samuel Brännlund (post-race stats reveal that Brännlund held 13.4w/kg for a full 15 seconds).

What’s even more astonishing are the results: never mind van der Poel’s absence from the final skirmish, no one from Alpecin-Fenix makes it into the top 10. In fact, there’s not a single current pro road racer among them. Sanders is a triathlete, Brännlund an off-roader, and the rest are a mix of former pros and MTBers-turnedZwift specialists, all representing elite Zwifting teams. Does this really mean what it seems to imply – that Zwifting is its own discipline, requiring a different, special set of skills that not even the best pro road racers possess? And if so, how can I become a Zwift specialist too?

The tough get going

It’s almost too painful to accept: a triathlete has wiped the floor with one of the best cyclists in the world. OK, Sanders is no average triathlete; he held the Ironman world record (7hr 44min) until it was broken by Britain’s Tim Don in 2017. The 32-year-old Canadian, with his trademark headband, tattoos and ripped upper body, looks more like an MMA fighter than a cyclist. Does Zwifting suit a brawnier, tougher, frankly more badass sort of athlete? I decide to be brave and ask him.

Sanders is an intriguing character; he has been publicly open about the fact he struggled with depression and substance abuse in his late-teens, dropped out of university and didn’t return to sport until several years later, in 2009. These days, he’s a triathlon superstar with a substantial following on social media. When my email finally finds its way through to him, he replies to my questions candidly and in generous detail.

“To be a good rider on Zwift,” he gets straight to the point, “you have to have an excellent power-to-weight ratio. If you don’t have that, nothing else really matters.”

But power is nothing without control; again and again, through his email, Sanders refers to “Zwift IQ” – e-racing intelligence. “You need to be constantly watching the sidebar to see if someone is attacking,” he begins a list of tips. “You don’t want to spend too much time near the back of the pack in case a gap opens. You need to have the right power-up and use it at the right time, and then, of course, you also need a little bit of good luck.”

Sadly, there is no short cut to a high Zwifting IQ. Sanders stresses the importance of accruing hour upon hour of experience on the platform, almost like flying hours for a pilot trying to earn their licence. “I have spent 45 days of my life on Zwift, and I am still learning,” he writes. Sanders has stated elsewhere that he does almost all of his bike training indoors. He is a Zwifting specialist in the truest sense, a fact he fully acknowledges when I ask how it felt to beat van der Poel.

“It was a lot of fun, but I have been racing on Zwift long enough to know to take these results with a grain of salt,” he modestly reflects. “Mathieu has very little Zwift experience. I have probably 20 or 30 times more race and training experience on the platform. In real life he would whoop my ass on this course, I know that.”

Sanders’ closest Canyon ZCC teammate in the race, in third place, is another Lionel, Belgium’s national Zwifting champion Lionel Vujasin. He started out racing MTB and cyclo-cross, so I want to know how he has transitioned to Zwifting so successfully. “I’m not gonna lie, I was pretty average [off-road],” says Vujasin. “I had the endurance, but not so much the technical skills.”

I’m slightly taken aback. Vujacic is currently ranked sixth overall on ZwiftPower (the site that collates results, stats and rankings while filtering out dubious performances) – he is one of the best Zwifters in the world. How did he get there from being just a mid-pack MTBer?

“Well, my physical abilities were well-conditioned from mountain biking,” says the 30-year-old, “and the rest is all about the experience with Zwift. I went to live events early on, met a lot of the big names, and started to learn – it’s all about the skills specific to the game… anticipation... getting a feel for how your avatar moves.”

Without getting too ‘transhumanist’ about it, this is beginning to sound like the merging of man and machine – the champion Zwifter being he who becomes most intimately attuned to the intricacies of the software. Vujacic talks about being able to predict the virtual road positioning of his avatar just by being able to ‘read the game’, allowing him to stay sheltered and make the most of Zwift’s simulated drafting.