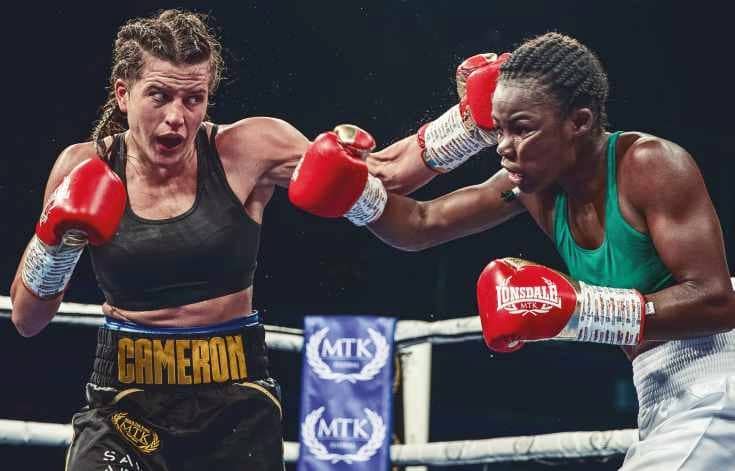 NEXT stop Katie Taylor. That is the four-word synopsis from Chantelle Cameron’s triumphant night at the Brentwood Centre, where she handed a comprehensive beating to Anisha Basheel in her WBC Silver lightweight title defence.

While the big fellas were jostling for position on the World Boxing Council’s heavyweight title path a few miles to the south-west, Cameron was putting herself in the front of the queue for the great 135lbs champion Taylor by winning this final eliminator on MTK’s promotion.

It had the potential of being a banana skin. While not in Cameron’s calibre in boxing terms, Basheel carries considerable power as those who witnessed her brutal stoppage of Sam Smith at York Hall last year will testify.

However, “The Massacre” would get nowhere near the undefeated Northampton boxer, who won 10089 (from Christophe Fernandez and Daniel Van de Wiele) and 100-90 (Robin Dolpierre).

From the start, Cameron dominated her Malawi rival via her jab and razor-sharp two and three-punch combinations.

Setting a ferocious pace over the 10 two minute rounds, the Jamie Moore-trained boxer was at her most intense in the one-sided middle sessions.

In fact, you wondered how many more shots Basheel could or should take. Her corner clearly know her best and, ultimately, they were vindicated as she stayed on her feet, giving a spirited account of herself late on. John Latham refereed.

Shaquille Day produced a storming second half to outpoint Louis Adolphe over 10 rounds for the vacant Southern Area welterweight belt.

This South London scrap might not have thrilled the purists, but it kept the audience gripped throughout.