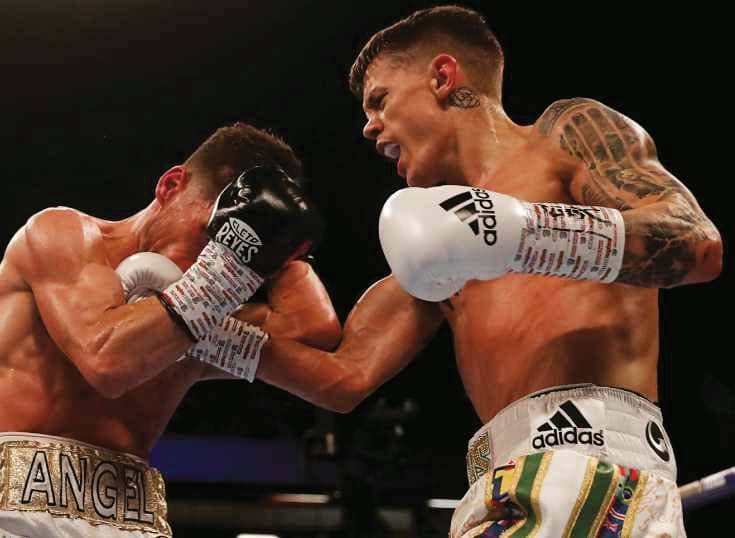 Edwards and Buatsi shine at the Copper Box

THERE are messages fighters send one another. Charlie Edwards tapped Angel Moreno with quick, light punches, just using those moments to let the Spaniard know that he could hit him at any time, that he could intercept his efforts just as easily as he could step off smartly and leave Moreno swinging hooks through empty air. Edwards was telling him that he, the WBC flyweight champion, was a class above.

When Liam Conroy shoved Joshua Buatsi after the bell, the latter made sure he walked right into him, shouldering him aside to make his way back to the corner. Buatsi was letting it be known that here, in this British light-heavyweight title fight, he was not going to give a fraction of an inch.

The Croydon fighters starred on the bill at the Copper Box Arena. Edwards is settling into his status as a world champion. He played to his audience, making a ring entrance with ‘And Still’ embroidered down the sleeves of his robe, pausing outside the ring to close his eyes for a moment of contemplation before glaring directly into the camera lens. Over the course of his 12 rounds with Madrid’s Moreno, Edwards didn’t simply rely on his speed, punch volume and ceaseless work rate. He used his skill.

Charlie remained in perpetual motion, his footwork carrying from side to side across the ring, the movement bamboozling the more straightforward Moreno. The Spaniard responded with wild attacks, dropping his hands and snarling as he jumped at Edwards. This allowed Charlie to pick him off, measuring him out with light jabs before placing his cross neatly through Angel’s defences.

He did the most damage when he whipped his right uppercut through to Moreno’s chin, shaking him with a couple of big strikes. In the eighth his right cross had smacked directly into the chin, Moreno lost his footing. He bounded up, unhurt, but Edwards had scored a knockdown. The Spaniard though was tough. He has lost three times in 24 fights, including to now WBA champion Artem Dalakian, but he has never been stopped. Even as Edwards peppered him with punches off either hand, grimly Moreno charged on.

Charlie however had won every round, shutting out Moreno 120-107 for Barry Lindenman, Mark Lyson and John McKaie. Victor Loughlin refereed.