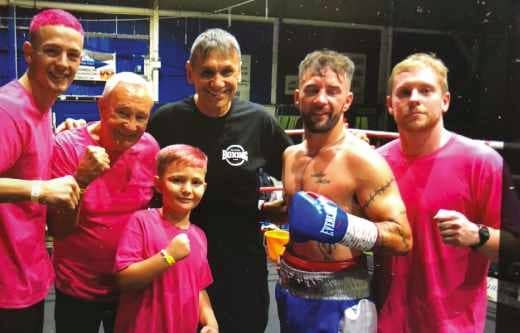 HISTORY was made at the Action Indoor Sports arena when local hero Lee Haskins shared the stage with his 19-year-old son.

As befits a former IBF bantam champion, Dad topped the bill in his first outing for two years and took a straightforward six-threes verdict over Nicaraguan Sergio Gonzalez.

The Spain-based visitor was on his backside as early as the opening minute, but it was through poor balance rather than some hidden power in the southpaw jab that put him there; he never looked in trouble from then on.

Haskins, on the other hand, injured his left ankle when he stepped on a ring toblerone in the second, almost doing the splits as the offending object slipped from beneath him. A Gonzalez punch landed as he went down, but referee Lee Every correctly ruled no knockdown.

With his movement restricted, 36-year-old Lee coasted the remaining rounds to take a 60-53 verdict.

If that was a low-key return for father, Anton Haskins stole the spotlight with a brilliant debut performance to give ringwise Reading journeyman Ibrar Riyaz as uncomfortable an evening as the veteran has experienced in years.