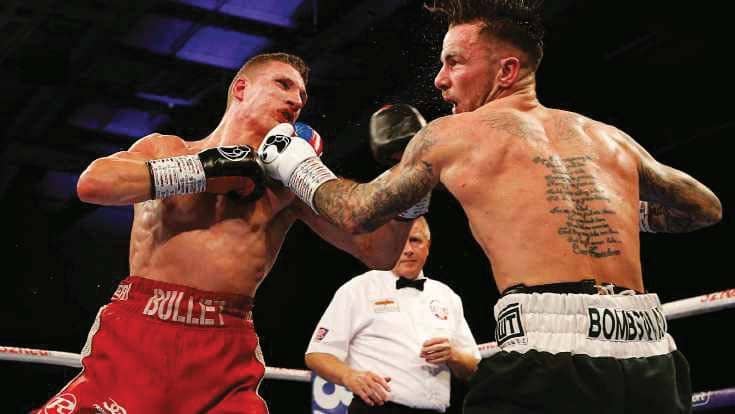 Bowen keeps hold of his British title with a stoppage win

IT might not have been Sam Bowen’s best performance, but it ultimately ended in victory for the hard-hitting Ibstock puncher, whose ninth-round stoppage win (33 seconds in) was a first successful defence of his British super-featherweight title. Cambuslang’s Jordan McCorry was a game opponent, but by virtue of some of his tactics, he incurred the wrath of referee Marcus McDonnell at Leicester Arena (Queensberry Promotions).

With McCorry seemingly having had slightly the better of the early exchanges, Sam was spoken to for twice hitting the back of Jordan’s head. However, it was the Scottish challenger who, falling behind and already warned for low punches and for regularly ducking down too far, lost a point in the sixth for another transgression of the rules.

There was a second point taken off in the following round, due to another low blow, but each instance seemingly fired McCorry up further, and on several occasions he took the fight to the champion, landing a number of meaty shots. The heavier-handed Bowen, though, his jab increasingly evident, was improving with every round. He was finally rewarded early in the ninth when, after rocking Jordan with a right, further punishment forced the stoppage.

Floored once in each of the opening two rounds by crude, big-swinging Frenchman Sabri Sediri, and having just been rocked again midway through the 10th and final frame, Sam Maxwell was then taunted by the late substitute. Following that nightmare start, and after picking up damage to his nose along the way, the gutsy Liverpool-based boxer had worked his way back into contention and was slightly ahead on two of the three scorecards. He put an end to ediri’s mocking by flattening him