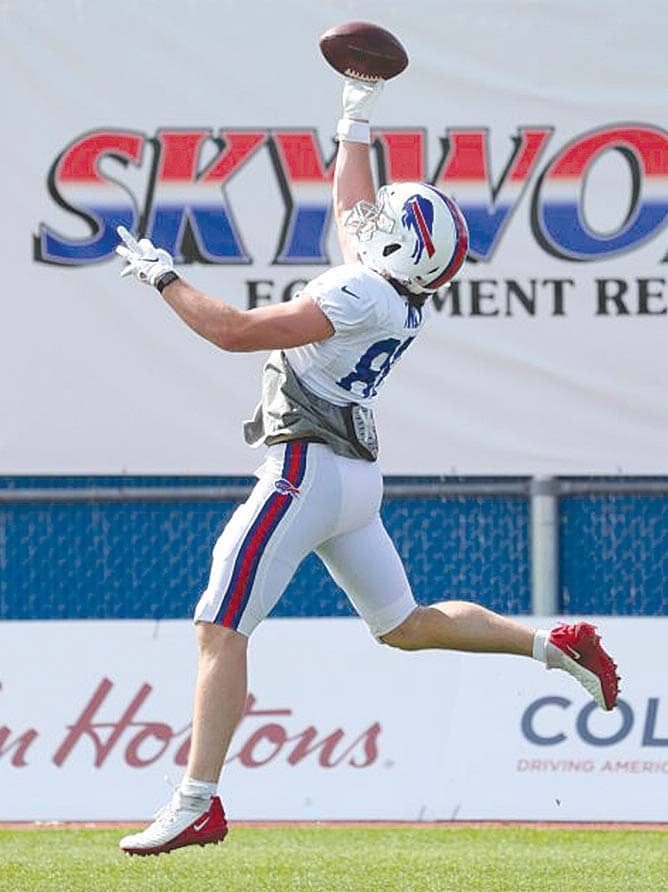 Dawson Knox made waves last season for his incredible stiff-arm in Buffalo’s win over the Cincinnati Bengals. It drew the attention of Buffalo’s biggest offseason acquisition, Stefon Diggs, who has a new nickname for Knox: Mr. Stiff-Arm.

“He’s called me that a couple times in the locker room,” Knox said with a laugh. “Any compliment from him I’ll take. So that’s nice. I’ll see how that goes again this year. I can’t be letting him down with that one. I’ve got some pressure on me.”

Knox does have some pressure on him heading into his second season. The Bills selected the Ole Miss product 96th overall last year with hopes that he could become the team’s long-term solution at tight end. That timeline quickly sped up thanks to an injury setback to projected starter Tyler Kroft and Knox was forced into the starting lineup after missing much of his first training camp with a hamstring injury of his own.

There were plenty of promising moments, such as his stiff-arm against the Bengals. But there were also plenty of drops, an issue for Knox going back to his first spring practices as a Bill. According to Pro Football Focus, Knox had 10 dropped passes on the year — which were the most by any tight end in the NFL.

For those reasons, Knox focused primarily on shoring up that part of his game this offseason. With the help of his family members and a Jugs machine, Knox worked tirelessly at improving his consistency as a receiver.