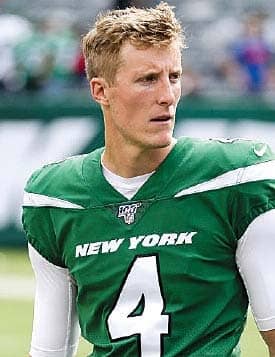 Edwards has spent the last four years with the Jets and was somewhat surprisingly not retained by the team. He has a career net average of 40.2 yards per punt and has topped 40 yards in net punting in each of the past three seasons.

The Australia product is known for his ability in the directional punting game and will battle with incumbent Corey Bojorquez for Buffalo’s punter job.

“We felt like it was time to bring in someone else at this point,” Bills head coach Sean McDermott said. “So we did that, brought in a more veteran player and a little different end of the spectrum. Lachlan has experience, he’s kicked in the northeast before and we expect him to come in and do a great job and add to the competition on our roster.”

“I’m 6-5, so I’ve got long legs, don’t really have to explode through the ball as much as other guys,” Edwards said. “But I like to be in control and my plant foot’s on the ground the whole time. And Iâ€ˆthink it’s good to have that under control, it’s more repeatable over the season as you get tired, as you get fatigued. It’s good to have that.”