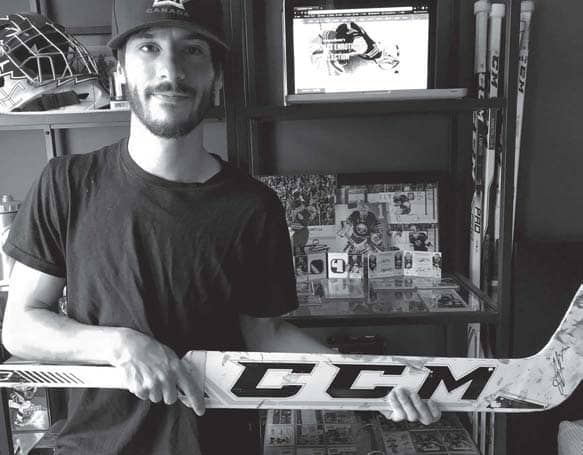 MEET AARON: “My name is Aaron Goldstein and I’m from Caledon, Ontario. I’m 26 years old and have been collecting hockey cards since 2005. My focus has been on goaltenders, as I’ve played the position myself for over 10 years now.”

GETTING STARTED: “I got into the hobby buying packs at a local convenience store. At the time, this was the only place near me where I could quench my thirst for cards. As I was ripping packs, I would mainly try to hone in on the goalie cards. The designs, coupled with the cool goalie masks, gear, and team uniforms, just meshed together so nicely and I loved that. They were like tiny pieces of art in my mind.

“Over the years I’ve collected a few goaltenders here and there, but I felt like my collection was missing a more specific aspect to it, so I made it my goal to one day start a super collection which would focus on one player only. Enter Jhonas Enroth.”

WHY ENROTH?: “I started collecting his cards because, as a smaller goaltender myself, I’ve always appreciated his ability to play at the highest level of hockey. His technical ability on the ice is something I’ve enjoyed watching and learning from for many years now, and continue to do so today. I remember watching his first NHL win back in 2010 against my hometown Toronto Maple Leafs and being amazed at how he handled himself in the net. Ever since then, I wanted to try and collect as many cards as I could of the Swedish netminder.”

MORE STORIES FROM BECKETT HOCKEYView All