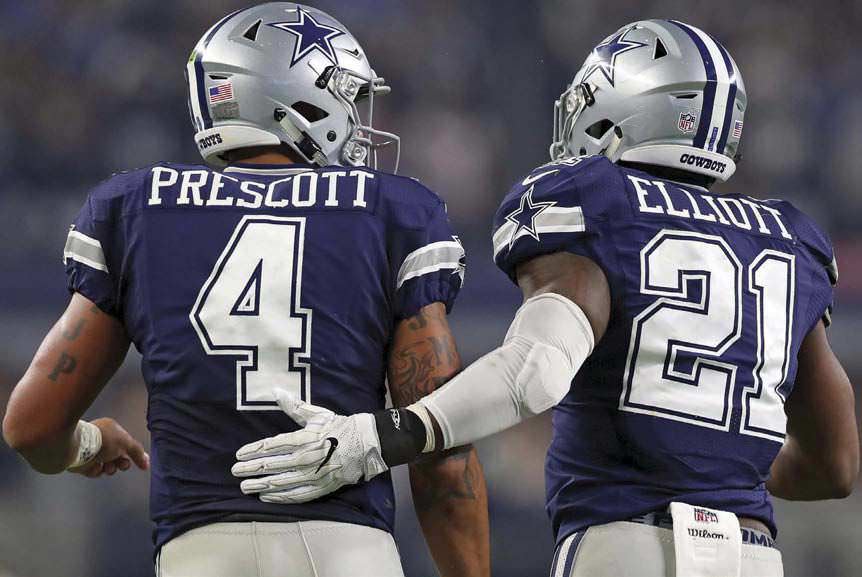 Dak and Zeke are possibly the two greatest NFL rookie teammates of all time.

Just a few months ago, expectations for the 2016 Dallas Cowboys were about as low as they could be.

The team “reached” for a running back with the No. 4 overall draft pick. They missed grabbing the quarterbacks they really wanted in the draft, eventually settling for Dak Prescott in the fourth round. But at least Tony Romo was supposed to return.

Change of plans. Romo was injured in the preseason, forcing Prescott into the starting role. Dallas featured an offense with two rookies in the backfield.

The most improbable situation in the league turned into the best team during the regular season. This wasn’t supposed to happen, but the Cowboys reeled off an all-time team-record 11 wins in a row heading into December.

Ezekiel Elliott (that running back Dallas drafted way too early, according to most experts) was leading the league in rushing and was on pace to have the best season ever by a rookie running back. His backfield buddy Prescott was playing with the confidence and poise of a four year veteran. How the entireNFL missed on Prescott—multiple times— might go down as one of the great mysteries in NFL Draft history.

He was the eighth quarterback selected in a draft that began with the Rams and Eagles trading up to take quarterbacks with the top two picks. Prescott played in a pro-style offense in college and faced some of the best defenses in the country during his three seasons as a starter.

In several ways, everyone’s crystal ball should have been clearer. The Cowboys have the best offensive line in football, a Hall of Fame tight end who has made a career out of getting open, and a game breaking receiver. The perfect storm of the two best rookies of the year being in the Dallas backfield has created a frenzy in the football card hobby.

Dak and Zeke are by far the two hottest commodities on the football card market. Arguing over which is No. 1 is pointless. It’s a blast to watch them both dominate in the same backfield. Currently, most of Elliott’s top cards are out-pricing Prescott’s cards from the same products. But that could change by the time the season is over.

We’ll look at their most impactful cards up to this point, including a full Rookie Card price guide for each star rookie.

MORE STORIES FROM BECKETT FOOTBALLView All