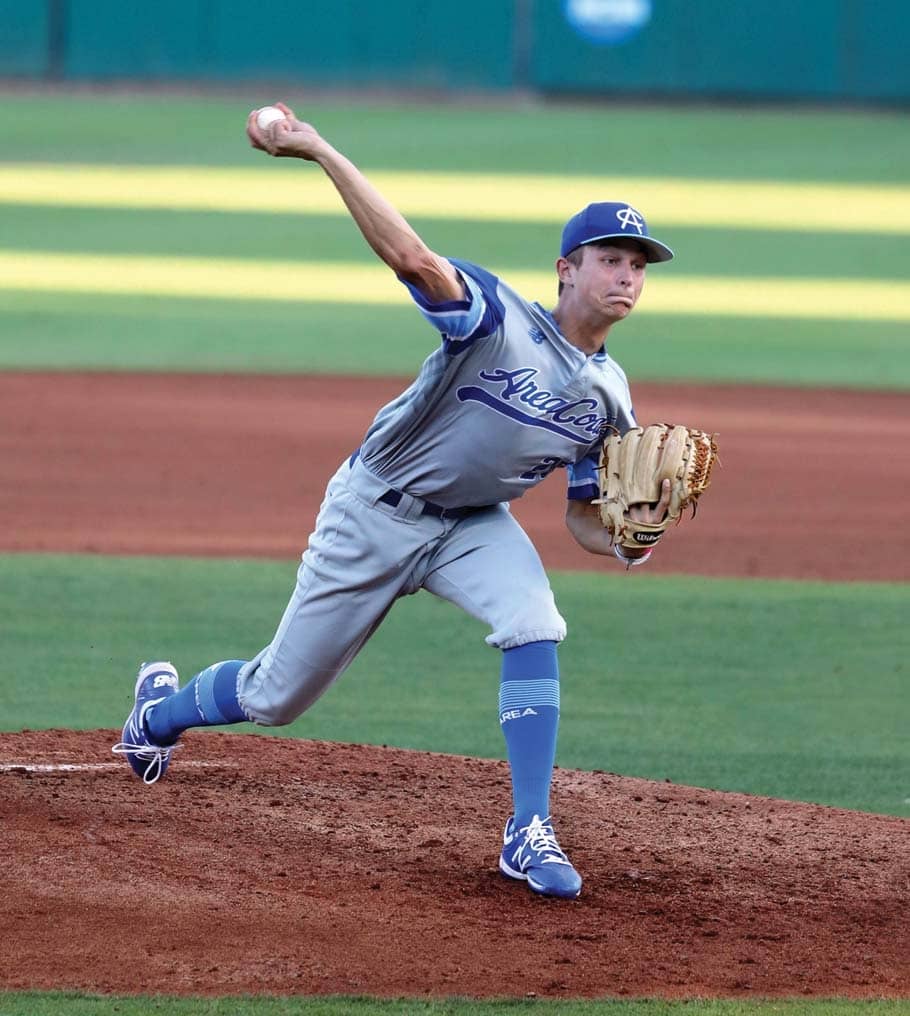 Mick Abel put in the work to improve his physicality and repertoire. Now the Oregon prep righthander is aiming to buck draft history.

For high school coaches, seeing a player go from good to great is one of the most satisfying aspects of the job.

Oregon high school righthander Mick Abel was a good player as a sophomore in 2018. He was a productive hitter and on the mound showed plenty of velocity, though he was hindered by his command and inconsistent secondary offerings. His sophomore season had ended by the time he tore the labrum in his left (non-pitching) shoulder diving back into first base.

But there Abel was, taking the mound for the first time as a junior for Portland’s Jesuit High, against a South Salem High team with one of the best lineups in the state.

First pitch: 97 mph. Strike one. For the next pitch, Abel turned to his newly developed slider. Strike two. One pitch later he had recorded a strikeout.

Three pitches later, he had two strikeouts. The third batter fouled off a pitch, but he also quickly sat down. Through 10 pitches, Abel had thrown 10 strikes and recorded three strikeouts.

He ended up striking out 12 and allowing one hit in six shutout innings. Jesuit was tough to beat all spring, but that was particularly true when Abel was on the mound. He went 10-0, 1.26 and Jesuit won the Oregon 6A state title in 2019.

“It was more his command. His sophomore year, (Abel) had some walks,” Jesuit High coach Colin Griffin said. “His junior year, he threw his fastball in and out, then his slider would fall off the table.”

This spring, Abel was looking to show that he could go from being a great high school pitcher to the best prep arm in the 2020 draft class. The slider Abel added last year was voted by major league scouting departments as the best breaking pitch in this year’s high school class.

For all that the 2020 season was shaping up to be for Abel and his Jesuit teammates, it ended in a Zoom conference call because of the coronavirus pandemic. While teams in warm-weather areas were shut down midseason, the Oregon high school baseball season never started.

Unlike many of his teammates, Abel’s baseball career is just beginning. He’s committed to play next year at Oregon State, but as a likely first-round pick, there’s a good chance he won’t make it to school. The righthander is battling Refugio (Texas) High’s Jared Kelley to be the top prep pitcher in the 2020 draft.

Kelley had a better fastball last summer, but Abel has been gaining ground. His fastball touched 97 mph but generally sat at 90-94 with a little less life than Kelley’s, but Abel’s slider gave him a significantly better breaking ball.

If this were a typical draft, it would have been a fascinating spring as the two pitched in front of many of the same scouting directors and crosscheckers. Kelley was working on improving his slider and Abel may have matched Kelley on the radar gun.