Top 10 Prospects In The DSL 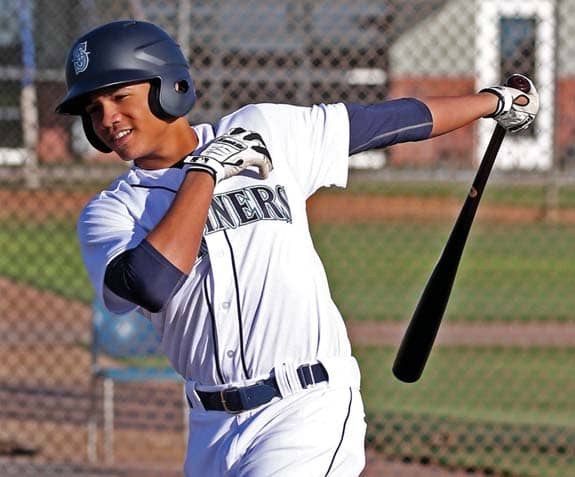 For most Latin American prospects, their first official games are played in the Dominican Summer League.

It’s a level that continues to become more heavily scouted, with clubs hoping to pick the pocket of another organization for a faraway prospect before he breaks through. Players are now getting traded out of the DSL and frequently come up in trade discussions and proposals, though most deals never come to fruition or become public knowledge.

To quality for this list, a hitter must have at least 70 plate appearances and a pitcher must have pitched at least 20 innings in the DSL. Older Cuban players who were in the league just to get a tuneup, like 22-year-old shortstop Yolbert Sanchez of the White Sox, weren’t included.

After landing one of the premier international prospects in 2017—Julio Rodriguez—the Mariners did so again in 2018 with the signing of Marte for $1.55 million out of the Dominican Republic, and early returns have been fantastic. Marte showed an exciting combination of athleticism, hitting ability and power in the DSL in 2019.

He hits with good rhythm and balance, sequencing his swing well from his leg kick to his fluid, explosive swing. He has fast bat speed and plus raw power with a swing geared to hit the ball in the air and good strike-zone discipline, making him a threat to get on base at a high clip with the potential for 25-plus home runs. An above-average runner, Marte got bigger and stronger last year without losing his athleticism.

Marte has a strong arm that fits well at shortstop, but he still needs to improve his hands and footwork there and learn to play under more control at the position. If that doesn’t happen or he outgrows the position, his offensive upside would fit well at second or third base.

The younger brother of Braves outfielder Ronald Acuña, Luisangel made a big name for himself in his pro debut, making the DSL all-star team and establishing himself as one of the Rangers’ top prospects. He has a compact frame with quick-twitch explosiveness and an aggressive mentality.

His swing resembles Ronald’s, from his load to his quick, whippy barrel action through the zone. He swings with aggression, but he seldom swings and misses. He tracks pitches well and controls the strike zone, leading to a high contact rate with more walks than strikeouts in his debut. Acuña has mostly gap power now with an offensive skill set that will rely more on his on-base skills, and he has the potential to hit at the top of a lineup. He’s a plus runner and a good athlete with a plus arm.

Acuña made impressive strides at shortstop in 2019 and he increased the probability he will be able to stay at the position instead of moving to second base or center field.

Matos earned a reputation among international scouts as one of the top offensive performers in the 2018 class and he showed why in his pro debut, with a 1.000 OPS that ranked third in the DSL and a late-season promotion to the Rookie-level Arizona League.