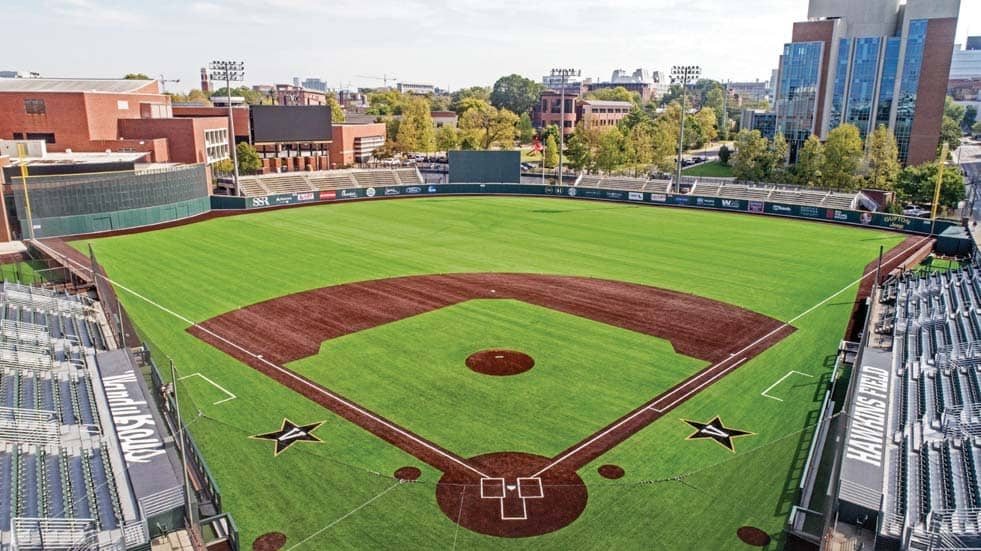 On March 8, after a 4-3 win against Texas Christian to wrap his team’s time in the Southern California College Baseball Classic in Los Angeles, Vanderbilt coach Tim Corbin was recounting some of the positives he took away from the weekend, a frustrating 1-2 showing for a Commodores team that still hadn’t quite found its footing.

One was that his team played some quality competition on the road on a natural grass surface, and if that last detail sounds trivial, consider that the Commodores play all of their home games on a very fast turf surface, and to that point, they had played all but three of their games at home.

“There’s so much value to going on the road,” Corbin said. “Getting out of your comfort zone, playing on grass and dirt . . . and playing good opponents. We need that.”

While grass is the default in pro ball, playing surfaces can vary widely from game to game in college. Over the course of a 56-game regular season, a team will likely play on not only turf and natural grass, but various versions of both.

There is fast turf and slower turf—to say nothing of turf that plays like a slip and slide after a good rain—natural grass that plays more like turf, natural grass more fitting of a high school facility, and on bad weather days, natural grass pocked with divots and puddles.

In a vacuum, playing infield defense on turf is easier. The bounces are predictable and true, so players don’t have to worry about gauging hops to determine when to attack the baseball, and at least in most cases, they can play deeper at their positions, giving them more time to react to a ball hit their way.

It also gives coaches flexibility in the types of players they can play at infield positions. If you are playing a majority of your games on turf, perhaps you can de-emphasize an infielder’s hands or footwork and put more of an emphasis on arm strength, which could serve to bail out the player who might be playing deeper than he would on grass.

“It changes a little bit, because you can play a little deeper on most turf,”

South Alabama assistant coach Alan Luckie said. “Most turfs are a little faster than natural grass . . . So you can play a little deeper, and you can just be more athletic because the hops and the bounces are more accurate and more true.”