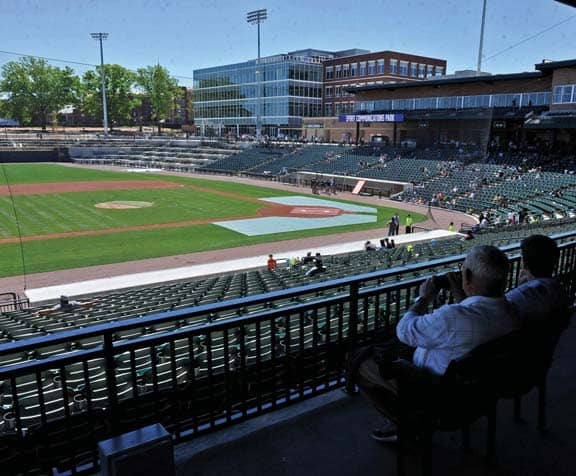 When Minor League Baseball resumes play, it will look nothing like it has in our lifetimes

When Minor League Baseball returns following the coronavirus pandemic, it will look nothing like it used to.

The Professional Baseball Agreement between Major League Baseball and MiLB expires on Sept. 30, and a proposal by MLB would eliminate 42 minor league teams and realign the remaining clubs for the 2021 season.

No matter how the PBA negotiations shake out, the outbreak of the novel coronavirus will likely have drastic effects on the 2021 season. Without an effective, widely disseminated vaccine, everything about the game day experience will be fundamentally altered for the near future.

From the box office to the turnstiles to the suite level to the seating bowl to the restrooms and everywhere in between, a day at the ballpark will be forced to strike a balance between entertainment and caution.

To get an idea of what the new normal might look like—whether that’s this summer or in 2021—Baseball America spoke to minor league operators across the country about the changes they anticipate making before the next time fans are allowed into their ballparks.

One of the first things that has to happen—to the best of a team’s ability—is to make sure the fans they let through the gates are healthy. Greater access to testing would make it easier, but it isn’t foolproof. There are already parks around the country which require fans to clear metal detectors before entering. Temperature checks might be the next step.

After a season spent ramping up excitement in the Madison, Ala., area, the new Rocket City Trash Pandas franchise was slated to open its gates for the first time this spring. Their new ballpark comes replete with all the modern amenities fans have come to expect—four-top tables, a 360-degree concourse, bars and other social areas in the outfield.

Now, the team might have to consider adding a new feature in order to allay fears fans might have about coming to the park.

Once the fans are deemed safe for entry, the next step would be to get their tickets scanned and let them walk through the turnstiles. In the age of coronavirus, even something as simple as that could prove tricky.

Even before the breakout, some teams had been pushing toward digital tickets that could be quickly read by a barcode scanner. With an emphasis on as little contact as possible, the new reality might give other teams a big push in that direction.

“We’re trying to work through contactless things, with the potential for considering how to get all our tickets onto mobile devices for people so that there’s no ticket changing hands,” Columbia Fireflies president John Katz said. “People hold their phones like they do when they get on a plane, and you put it up to the scanner and the scanner lets you through.”

Teams with multiple entrances are going to be at a big advantage because fans are going to need to maintain social distance while waiting to get through the gates, which could lead to some very unwieldy lines on particularly popular nights.