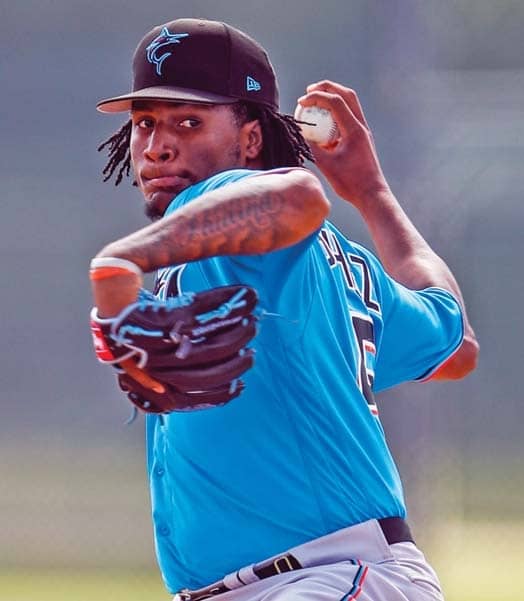 TRACK RECORD: Originally signed by the Phillies for $35,000 in July 2015, Sanchez was traded to the Marlins in the February 2019 trade that sent J.T. Realmuto to Philadelphia for catcher Jorge Alfaro, lefthander Will Stewart and Sanchez, who was the Phillies’ No. 1 prospect at the time. Prior to the trade, Sanchez established himself as one of the top pitching prospects in baseball on the strength of an explosive three-pitch arsenal. A 6-foot, 185-pound righthander, Sanchez struggled with right elbow inflammation in 2018, restricting him to just 46.2 innings in his final season with the Phillies. Sanchez enjoyed good health in 2019, pitched a career-high 114 innings and reached Double-A for the first time. Sanchez was the top-ranked pitching prospect in the Southern League, posting an 8-4, 2.53 record with 97 strikeouts and just 19 walks in 103 innings.

SCOUTING REPORT: Sanchez’s three-pitch mix is headlined by a mid- to an upper-90s fastball that can touch 101 mph. Complementing his double-plus fastball is a pair of plus secondary offerings in an upper-80s changeup with good sinking action and a hard, power slider that features two-plane tilt. Perhaps even more impressive than his stuff is Sanchez’s ability to control all three offerings. He is an advanced strike-thrower with plus or better control, and he walked fewer than 1.7 batters per nine innings at both of his stops in 2019. A converted infielder, Sanchez is a good athlete whose control is aided by his relatively clean, smooth delivery. Previous concerns about Sanchez’s elbow injury and his smaller stature limiting his effectiveness as a starter seemed to have quieted after an effective 2019. In all, Sanchez is one of the few pitching prospects still in the minors who can combine premium velocity, multiple swing and-miss offspeed offerings, plus control and an easy, athletic delivery when he takes the mound every fifth day.

THE FUTURE: Sanchez will participate in big league spring training with the Marlins in 2020, but the likely scenario remains that he opens the regular season in Triple-A. A major league debut sometime next summer or in September is possible, but the Marlins seem content to let Sanchez continue to gain experience and build innings in the minors before finally breaking through with a regular rotation spot in 2021. Sanchez has the highest upside of any pitcher in the organization, and the Marlins hope he can be the frontline starter the franchise will need as it rises from its latest rebuilding effort.

TRACK RECORD: Bleday enjoyed a breakout junior campaign at Vanderbilt before the Marlins signed him for a franchise-record $6.67 million as the No. 4 overall pick. A first-team All-American, Bleday led all Division I hitters with 27 home runs in 2019 and helped the Commodores win the program’s second College World Series championship. He made his pro debut for high-Class A Jupiter on July 20.

SCOUTING REPORT: Bleday is an advanced hitter with a smooth left-handed swing and refined approach. He can drive the ball with plus raw power when he connects, and he gets his barrel on the ball often. Bleday is an average runner with an above-average arm who profiles as an above-average defender in either outfield corner. Scouts routinely praise Bleday for his overall makeup, noting that his continued improvement over his three years at Vanderbilt was hardly a surprise when considering his work ethic and maturity.

THE FUTURE: Bleday has the pedigree, experience, and talent to move quickly. He should see plenty of time at Double-A in 2020. Bleday has the potential to be a high-average, middle-of-the-order hitter who should be able to hold down a corner outfield spot for years to come in Miami.

TRACK RECORD: One of the top prospects traded at the 2019 deadline, Sanchez joined the Marlins’ organization in the deal that sent right-handers Nick Anderson and Trevor Richards to the Rays. Sanchez originally signed with the Rays for $400,000 in 2014, and he received his first taste of Triple-A in 2019.