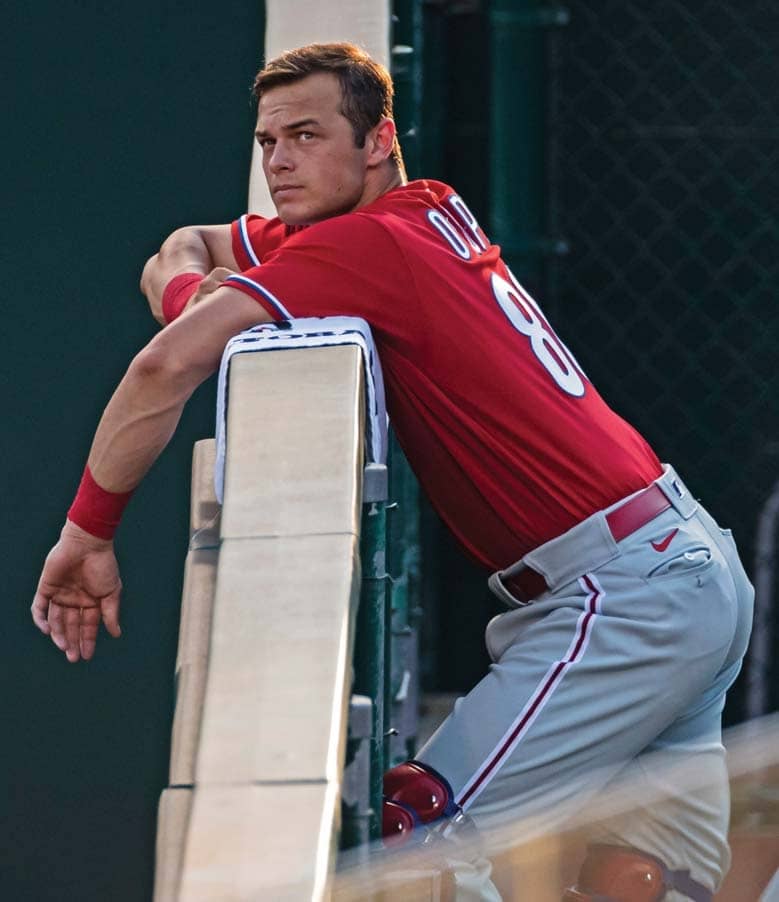 During the five-plus months since the coronavirus pandemic took hold in the United States and across the globe, not many people can say that the circumstances have helped them live out a dream.

For Phillies catching prospect Logan O’Hoppe, though, there was a little bit of a silver lining. O’Hoppe, whom the Phillies chose out of a Long Island, N.Y., high school with their 23rd-round pick in 2018, grew up rooting for the Yankees and had been to Yankee Stadium on many occasions, both as a fan and as a player for scouting events.

The pandemic forced teams into a revamped version of spring training—informally dubbed “summer camp”—that took place in each team’s home park. The brief reboot consisted mostly of workouts and intrasquad games, but also featured a few exhibition games at the end.

One of those games pitted the Phillies against the Yankees in the Bronx, and O’Hoppe got into the game, meaning he got to hear his name called over the public address system at his old childhood haunt for the first time as a professional.

“My whole job, wherever I’m at, is a dream come true,” O’Hoppe said, “and that happened to be one of the better parts.”

In a virus-free 2020 season, O’Hoppe likely would have begun the year at low-class A Lakewood with a chance to make it to high-Class A Clearwater in the second half. Instead, he finds himself working out and playing in five-inning intrasquads as part of the group of players and prospects at the Phillies’ alternate training site in Allentown, Pa.

The experience is like a slimmed-down version of the instructional league or extended spring training experience, albeit in much better surroundings and with a smaller, more diverse group of players (in terms of age range).

“We’ll go through our workout in the morning and our prep work and early work and everything that you’d expect,” O’Hoppe said. “The games are maximum five innings, so that’s nice because it scratches your baseball itch, but it doesn’t burn you out.”

Another key way that life at the alternate site differs from instructs or extended is in its mix of players. Take the three catchers the Phillies have at Lehigh Valley. In addition to O’Hoppe, the organization’s trio of backstops also includes Rafael Marchan and Deivy Grullon.

Marchan is a defensive wizard who, like O’Hoppe, was likely to start this year in the lower levels of the minor leagues. Grullon is a more seasoned vet and made his big league debut in 2019. Even in a normal year, he would likely have spent a good portion of the season at Triple-A, waiting for an opportunity to help the club in Philadelphia.

It is very unlikely, however, that all three of O’Hoppe, Marchan and Grullon would have seen one another once spring training ended and players headed to their respective levels. So given the unique circumstances, O’Hoppe has a chance to spend the coming months picking Grullon’s brain for tidbits that will help him in 2021, when things are hopefully back to normal and he can re-start his ascension through the minor leagues.