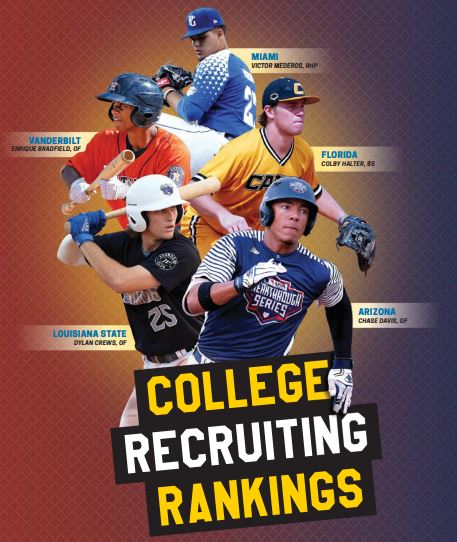 Despite the inherent drawbacks of video scouting, many college recruiters say lessons learned during the pandemic will continue to be applied when things return to normal

Sitting in his home office this summer, a recruiting coordinator pulled up a live stream feed for a game that featured a player he was recruiting. Just as the player came to bat for the first time, the Internet feed glitched and went out. It came back moments later and the player was standing on second base.

A couple innings later, the player was back up to bat. The feed was working well this time and the camera was positioned to show the at-bat from the player’s open side. Only this time, the on-deck batter stood in front of the camera to warm up, obscuring the view.

“(The batter) ends up on third, so I guess he did something good, but I didn’t see the swing at all,” the recruiting coordinator said. “Stuff like that is frustrating.”

Due to the coronavirus pandemic, the NCAA’s Division I Council Coordination Committee instituted a recruiting dead period on March 13, the day after the NCAA canceled the College World Series and all other winter and spring sports championships. That dead period—during which in-person contact with recruits and off-campus recruiting is prohibited— was extended multiple times and lasted at least through Sept. 30.

As a result, recruiting has gone virtual this summer. Instead of college coaches traveling across the country to watch players in person at events like Perfect Game’s World Wood Bat Association national championship or Prep Baseball Report’s Future Games and the slew of showcases and tournaments that make up the summer evaluation period, they are watching the events from home on live streams. Instead of recruits visiting schools, either to take part in camps or for an unofficial visit, they are learning about the programs they are interested in through FaceTime conversations and virtual facility and campus tours.

“Who knew it would be easier to get from field to field in Atlanta (where most recruiters spend a lot of the summer), and building your schedule the night before, than pulling up live streams?” one recruiting coordinator said. “You’ve got Periscope, PlaySight, FloSports. You’ve got to have 10 different logins and passwords. What time zone is it in?

“You’re not sitting outside sweating bullets, which is nice. But you never know what kind of angle you’re going to get. If you’re looking at a position player, you finally get a ground ball to him and the camera angle cuts out. It’s fairly easy to see at-bats, but sometimes the camera is up at the top of the press box or too low and then the umpire and the catcher are in the way. It’s a big operation.”

Converting the traditional recruiting process to a virtual one has at times been clunky. Seemingly every coach has a similar anecdote—glitchy Internet, a camera knocked out of position and now showing the concession stand instead of the game, feeds effectively rendered useless because of a poor angle. It’s a testament to Murphy’s law that just about anything can go wrong with a DIY broadcast.

But it’s just another part of an unprecedented year in college baseball. And while coaches aren’t thrilled about the arrangement, they understand why they’re not being allowed out on the road to recruit and are doing their best to adapt to the situation.

Once the dead period was extended through June, event companies and tournament operators sprang into action to make sure their events would be available on live streams. It is an important part of their sales pitch— part of the reason to play in many showcases and tournaments is for the exposure to college coaches and pro scouts.

If college coaches aren’t allowed on the road to watch games (though junior college coaches are) and pro teams are limited to three scouts per event (and some teams have scaled back scouting this summer due to budget cuts and health-related concerns), providing a live stream ensures there is still an opportunity to be seen.

But not all live streams are equal. The broadcast at PG National was universally praised by coaches. The showcase was held at Alabama’s Hoover Metropolitan Stadium, the home of the Southeastern Conference Tournament, and it made use of a stadium that is set up for high-end broadcasts, using multiple camera angles and a broadcast team.

“PG National was almost like watching a major league game with some of the production,” one recruiting coordinator said.

PBR also earned praise for its live stream from the LakePoint complex in Atlanta using PlaySight. Coaches were also impressed with FloSports, which some tournaments have used.