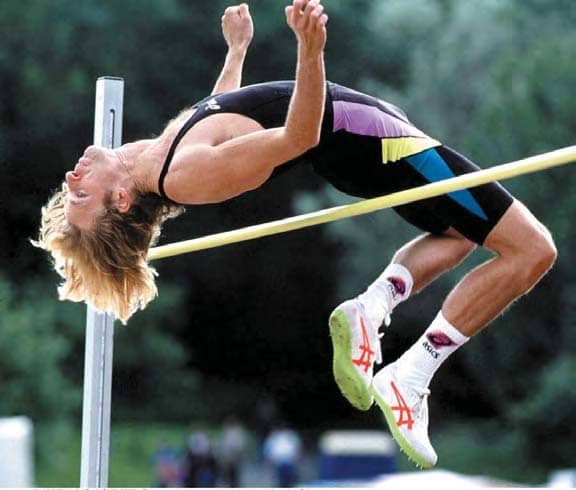 THE most exciting and drawn out world record that I have seen was by the 19-year-old Soviet high jumper Vladimir Yashchenko at the 1978 European Indoor Championships in Milan. He had set an outdoor record of 2.33m the previous year and started this competition by failing his opening height of 2.10m. He also failed a number of other heights, but nevertheless first equalled his outdoor mark and then set a new world record of 2.35m with his 20th jump of the nearly four-and-a-half hour competition.

It was the highest jump ever made with the straddle style. Almost as tense was when flopper Patrick Sjoberg of Sweden went for the world mark outdoors at Stockholm in 1987. Having twice failed the height and taking only his sixth jump of the competition, after a nail-biting pause he cleared 2.42m.

In 1993 the superb Javier Sotomayor of Cuba raised the outdoor record to a remarkable 2.45m (8ft 01/2in) in Salamanca, taking only five jumps in the whole competition. It came 37 years after the first 7ft (2.13m) jump. I was extremely lucky to have seen Sotomayor set the indoor mark when winning the 1989 world indoor title in Budapest with 2.43m (7ft 111/2in).

Back in the days when Britain produced world-class female high jumpers, Sheila Lerwill, unusually then for women, using the straddle, broke the world record with 5ft 71/2in (1.72m) at the 1951 Women’s AAA Champs. That record was beaten in May 1956 with 1.74m (5ft 81/2in), also with a straddle, by Thelma Hopkins of Northern Ireland, who had won the 1954 European title in Berne, Switzerland.

At that meeting a group of enthusiasts had gone to the British Embassy and borrowed a flag – it was very long and heavy – which we took turns in waving. When Hopkins took the title it was my turn to wave it and it seems I had my photo taken by Pathe Newsreel, which appeared in cinemas all over Britain.

Of some interest is the fact that second to Thelma at Berne was the outstanding Romanian Iolanda Balas, who two months after the Brit’s 1956 mark, using the oldfashioned scissors style, began a run of 13 times raising the world record, unfortunately all of which I missed.

The next time I watched the world record beaten was when the 16-year-old Ulrika Meyfarth of Germany jumped 1.92m using the flop style at the 1972 Munich Games. She was a remarkable jumper and I was pleased to see her regain the record when winning the European title 11 years later in Athens with 2.02m.

The following year, at the European Cup in London, she beat it again, by one centimetre, unusually having it equalled by the woman who came second, Tamara Bylova of the Soviet Union. Another four years after that I was pleased to be at the 1987 World Championships in Rome when the Bulgarian flopper Stefka Kostadinova cleared a superlative 2.09m (6ft 101/4in), a mark which still stands 32 years later.