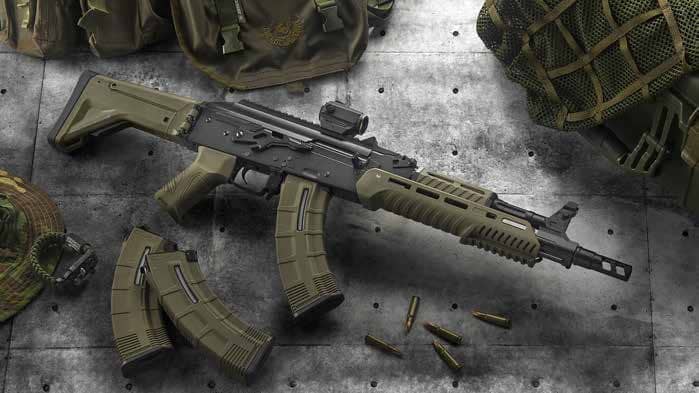 NORMAL SERVICE (AND SOME DEGREE OF SANITY!) RESUMES AT AIRSOFT ACTION, AS BILL FINALLY GETS BACK TO HIS TRUE LOVE, NAMELY THE “AVTOMAT KALASHNIKOVA” PLATFORM AND TAKES THE NEW CXP-ARK FROM ICS AIRSOFT FOR A SPIN ON THE RANGE! DOES HE, LIKE MIKHAIL IN THE MEME, DISAPPROVE OF ALL THIS “MODERN STUFF”, OR WILL HIS HEAD BE TURNED BY THE NEWEST KID ON THE BLOCK?

I do love a good meme and one of my favourite “Kalashnikov” ones is the one that goes “this rifle is steel and wood, it don’t need any of your bubba shizz”, although I also love the one that simply states “Mikhail Approves”. There’s been a lot of talk in purist circles of late, on the theme of how the humble AK has been transformed into something more “tacticool” and is the poorer for it but I’m afraid, as much as I love a classic, I disagree.

Recently I’ve been looking at a number of superb new “AR” models but as “the regs” will know, I do love a classic AK - that dark wood and steel mix does get me all of a-tingle, especially when it’s a solid old AKM or AKMS! But time, inexorably, moves on and the fact is that even the Russians themselves have updated the old campaigner into the AK-12, and I was reading just yesterday about the AK-15, which is chambered in the venerable 7.62×39mm cartridge. Both the AK-12 and AK-15 have been developed by the Kalashnikov Group under the “Ratnik” program and have been accepted into Russian military service, so it seems that even the “home team” have come to embrace the meld of that superb firearms design, updated with polymer parts.

For me this is no bad thing, as new technologies and parts can put a shine back on something that’s been around for a while and the not-so-humble-after-all-AK is having a bit of a renaissance, in both real and replica terms - and this brings me great joy to say the least! I have a number of modern loadouts, some directly “Soviet” and some with a more generalised OPFOR feel that are incomplete without an AK. I am slowly working on my own “Ratnik” gear (with expert input and patient help from Taz) and now have an AK-12 for that, along with a whole heap of MidCap mags but outside of that, my much-laughed-about “Team Three Stripe” setup is always ready for an update! I also have my GreenZone gear, which is thoroughly modern and if I’m honest, I’ve been waiting to find an AEG that really works with that.

Finally, I believe I have - in the form of the latest “AK” model to come from ICS Airsoft, the CXP-ARK.

I first saw the ARK “in the flesh” at SHOT in January and after giving it a good prodding at the show (and nodding approvingly at Nige), I quite honestly couldn’t wait to get my hands on one! Although there is a plain black version which looks very nice indeed, it was the black with green furniture that really grabbed me; I was taken with this initially as it reminded me of the black/green of the old Bundeswehr G3A1 which is a nice nod to the Cold War era but then I imagined how the new AEG would work with my gear and I was pretty much sold there and then, tactical tart that I am!

MORE STORIES FROM AIRSOFT ACTIONView All