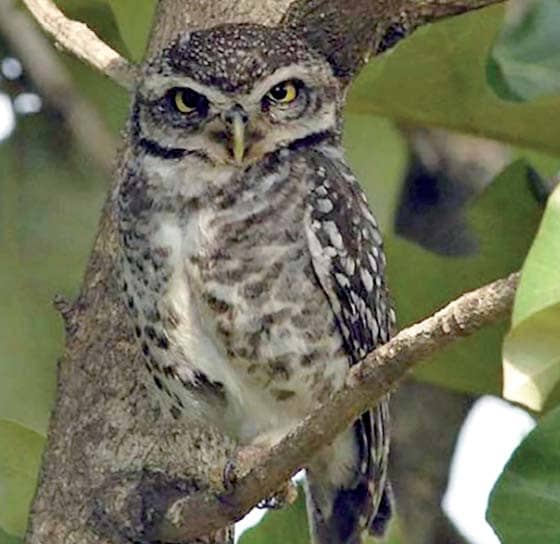 While we were visiting a friend’s farm in the village of Yelachetty, near Bandipur Tiger Reserve, we found Spotted Owlets nesting on the tiled roof… and one of the chicks on the kitchen floor!

We put the chick back into the nest, but he fell out again. Since we were heading back to Bangalore the next day and no one would be in the house, we decided to take him with us.

The chick was almost adult-size. His wings were fully formed and he had a white beard, which he would fluff up and look at us when he was nervous. He didn’t like being held and protested by clicking his beak and screeching. We named him Bob!

It took Bob a day or two to settle down. He was fed three times a day. After breakfast, we would put him in a cardboard box to sleep (since owls are nocturnal). In the evening he would be let free in the dining room to strengthen his wings. One of his favourite perches was the ceiling fan, which we made sure was always off!